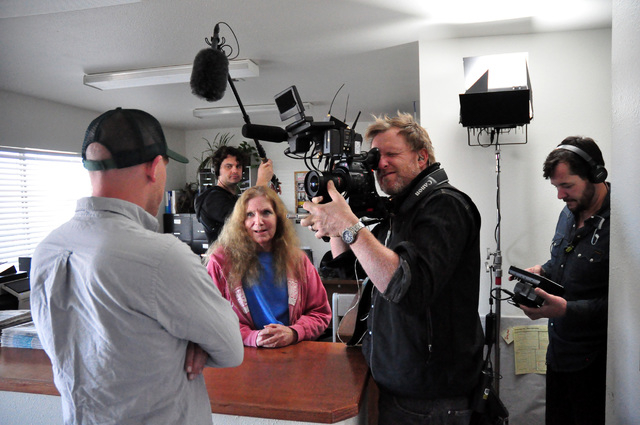 No matter how one slices it, freedom has different meanings to different people around the country.

As such, comedian Billy Wayne Davis wanted to learn firsthand how people exercise their respective freedoms in America.

Davis and a film crew took a road trip from the eastern United States and made various stops at locales where individuals and families live their lives as they lawfully choose, if not slightly unorthodox.

His travels led him to Pahrump earlier this year where he spoke to several local individuals about how they interpret their individual freedoms.

The movie was created by Morgan Spurlock’s production company.

Spurlock gained fame and notoriety for his documentary “Super-Size Me,” where he ate nothing but McDonald’s fast food for one month straight, severely affecting his health.

“Freedom! The Movie,” is scheduled to air Saturday on Country Music Television at 6 p.m.

Davis made sure to speak to one local man whom nearly everyone in town has seen or is familiar with.

Ray “the Flagman” Mielzynski, is known for walking Pahrump’s streets while carrying the American flag, a copy of the country’s Bill of Rights and two sidearms openly displayed.

“I immediately took to the Flagman because I like anybody that has a conviction about whatever they’re doing and there’s a certain discipline,” Davis said via telephone interview this week. “Standing on the side of the road saying hello to cars isn’t a bad way to pass the time either, but it is a seasonal hobby in the desert.”

Mielzynski on Wednesday said he was slightly surprised by the interest in not only himself being profiled, but the fact that the production company had an interest the town of Pahrump.

“Somebody came across my name and what I was about,” he said. “I was on a local television show for 17 months, four times a week. They saw a couple of those shows and decided they should talk to me about freedom because that’s my main focus and main purpose in life.”

Mielzynski, a native of Chicago, said once he learned what the producers of the show had in mind, he completely understood why there was interest in having Pahrump profiled on national television.

“I believe Pahrump is one of the freest places in the country because when I came out here in 1978 that was my main focus,” he said. “I’m from the big city and it just seemed like you couldn’t move without getting harassed by somebody. I decided to come out here when there were only 1,348 people at the time and two cops in town.”

When asked what his definition of freedom was, the Flagman’s response was quick and to the point.

“The right to be left alone, is indeed the basis for all of our freedoms,” he said.

Aside from visiting with the Flagman, Davis drove to a destination where all individuals have the freedom to just, “let it all hang out.”

The Resort at Sheri’s Ranch on the far south end of Homestead Road was the next stop for Davis who toured the facility and met with a few of the ladies.

He appeared to be both fascinated and mesmerized by the experience.

“It was the first time I was at a legal brothel and the last time,” he said laughing in his southern drawl.

Davis’ third destination just outside of town, led him to a rural location where two residents raise lions, tigers and other non-domesticated creatures.

He noted that one aspect of Pahrump’s freedoms was related to the size of Nye County where he learned that due to its sheer size, the population density equates roughly to two people per square mile.

The couple he spoke with, Zuzana Kukol and Scott Shoemaker, moved to Pahrump due to the weather and the fact that the laws pertaining to exotic animals are not as strict as in other states.

While making his way to the residence Davis provided some humorous thoughts on reasons why Pahrump was profiled in the movie.

“If you want to be free, just come out where no one cares if you’re out here,” he said. “I don’t think there’s a homeowners’ association out here either. I’m sure I don’t need to tell you what the good people of Pahrump are doing with all this freedom. Naturally, they are massing large collections of lions and tigers.”

Once at the property, Davis was noticeably skittish when the owners introduced him to one of their four tigers.

“I was a little apprehensive around the big cats because they can kill me,” he said. “I appreciate what there were doing, but it’s not for me.”

Davis also had an interest in shooting off fireworks while in town.

It should be noted, the movie was shot earlier this year before county officials approved the use of aerial fireworks at the Pahrump Fairgrounds.

Davis was disappointed and puzzled about the previous fireworks ordinance after speaking with employees at Pahrump’s Red Apple Fireworks.

“I grew up in Tennessee and didn’t realize that in most places, you just can’t buy fireworks,” he said while driving to the business. “I don’t know if you’ve blown anything up, or lit something and something pretty shot out, but it’s pretty awesome.”

All was not lost however, as the owners of the shop offered to demonstrate several of their more popular items.

“Tigers, brothels, guns and fireworks, it’s like the laws in Pahrump were written by 15 year-old boys,” he said. “If that doesn’t make you happy, you’re just a bad person. Not being able to set off the fireworks was a pretty big freedom setback.”

Davis, after wrapping up production and reflecting on the entire road trip, noted that the town of Pahrump appeared to have the best examples of freedom when compared to the other destinations he and the crew visited, including Florida and North Carolina.

“Pahrump was probably the freest place we were at and the most respectful,” he said. “New Hampshire had a lot of freedom, and there was some in-fighting there that was spotty. Pahrump seemed to me the best example of the definition of freedom, which is you should be able to do whatever you want as long as it doesn’t hurt anybody and to respect everyone and that seemed to be very evident in Pahrump.”

Additionally, Davis said the film crew spent more time in Pahrump than the other destinations during the production.

“We’re all very proud of how the movie turned out and we think everyone is going to really like it,” he said. “I spent more time in Pahrump than we did anywhere else. I love Pahrump, and I love the spirit in that town.”

Davis, a native of Nashville, Tennessee, has been touring the United States performing standup comedy for more than 10 years.