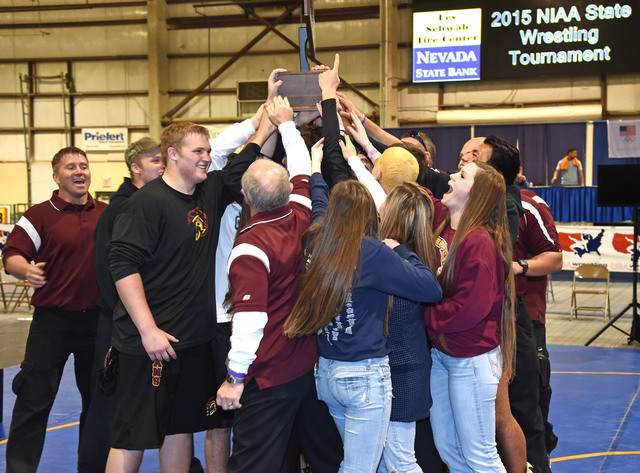 “I’m excited for the boys for winning,” said head coach Craig Rieger, who also coached them in 2008. “As a team we wrestled hard all year long.”

The team also walked away with two individual championships, Jace Clayton at 285 pounds, and twin brother Jax Clayton at 195 pounds. (See story B1).

Rieger said the tournament in Winnemucca was an uphill battle from the start on Friday. Lowry had wrestlers in all 14 divisions, while Pahrump Valley had qualified scoring wrestlers in only nine divisions.

Then the meet started off badly for the Trojans on the first day when senior Nick Nelson was injured and lost within 30 seconds of his bout at 132 pounds.

“Nick tore his hamstring badly (from a partial tear at region) at 0:19 into his first round—with a Lowry opponent at that,” freelance photographer Peter Davis said. “I guess we got them back for that.”

Also, senior Samuel Tucsnak arrived Friday with a fever, losing the first round but winning a consolation match, earning the team two points.

Rieger didn’t feel Tucsnak was too sick to wrestle.

“Really, some of the coaches said he wrestled badly, but I think he did well,” Rieger said. “I think (Tucsnak) was scouted heavily and so when he went to wrestle, the other teams were just ready for him and he couldn’t get his offense going.”

Despite the early losses, the team only trailed Lowry 33-27 after the first day, sending seven wrestlers to Saturday’s semifinal round while Lowry sent eight.

The big question going into the semifinals was whether or not the Trojans were going to get any help from the south in knocking some of Lowry’s wrestlers out.

“Last year we really didn’t get any help from the south,” Rieger said. “This year it was there. I even had a coach come up to me from the south and he was surprised we were still in it on the second day.”

Get help they did. Pahrump won five semifinal matches, including senior Sam Brophy out-pointing Lowry’s Nate Nelson at 145 pounds, 15-10, and senior Adam Preciado’s decision at 195 pounds against Lowry’s Anthony Hummel, 6-4, in extra time. While Preciado had qualified as a nonscoring wrestler, the victory removed a Lowry wrestler from the finals and a possible 10 points.

Meanwhile, the Trojans sent twins Jax and Jace Clayton, Jeremy Coates (220 pounds) and Jonathan Corrow (182 pounds) to the finals, along with Brophy. Preciado withdrew due to injury.

“During the semifinal round is where you make your points in this kind of tournament,” Rieger said.

After the semifinals, Rieger had calculated that Lowry had to win all three final matches and the Trojans had to lose all five for Pahrump Valley not to capture the title.

For Rieger, the answer came for him after the 126 pound class. Lowry’s Kevin Blanco lost to Spring Creek’s Anthony Chavez.

“That’s when I knew we had won the state title and I could breathe a lot easier,” he said. “I then just concentrated on my finalists and enjoyed the finals.”

Davis said he wasn’t keeping track like Rieger but he said the crowd went crazier after each match won.

Rieger said at 195 pounds the Trojans had two finalists because extra Preciado once again wrestled himself to the finals and faced Jax Clayton. He had done this at the southern regional tournament too.

“In this situation it was not the case where I had to choose who to root for,” Rieger said. “Jax Clayton has been the hammer all year long motivating my heavyweights to wrestler harder and better. In my mind these are the top two wrestlers in the state at one and two.”

Preciado injury defaulted so that his team could get the points in the finals.

Davis was excited about the two finalists being Trojans.

“(Preciado) wrestled incredibly well,” Davis said. “That was just incredible, two guys, both Trojans, up for the championship.”