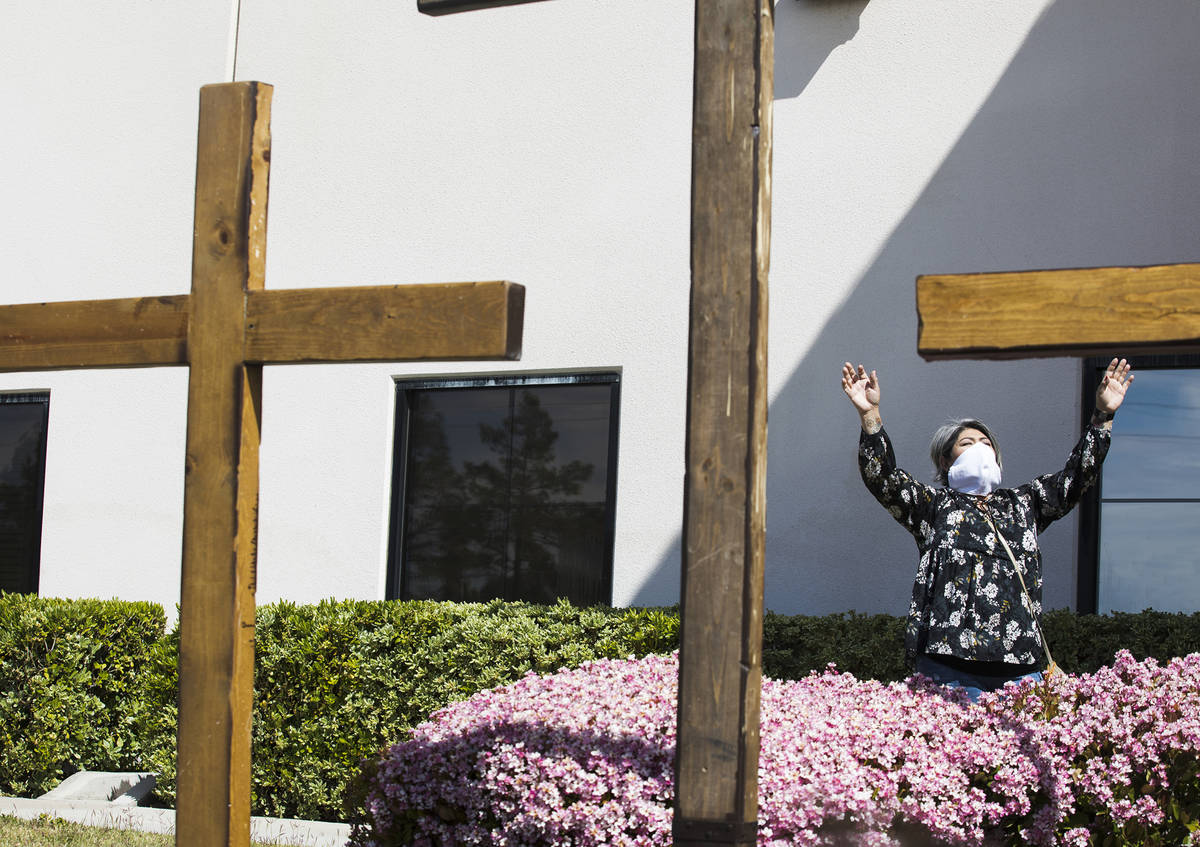 Norma Urrabazo worships from the side of the stage at an Easter service in the parking lot at International Church of Las Vegas in Las Vegas, Sunday, April 12, 2020. (Rachel Aston/Las Vegas Review-Journal) @rookie__rae 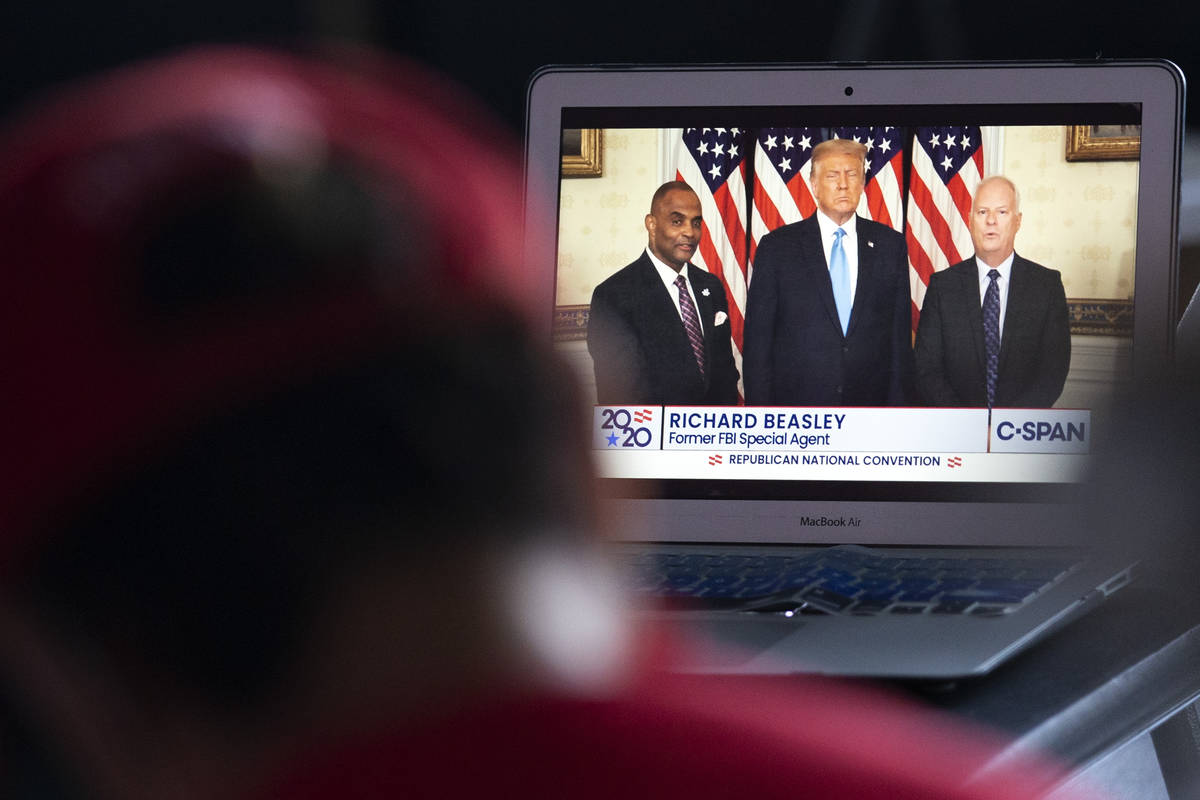 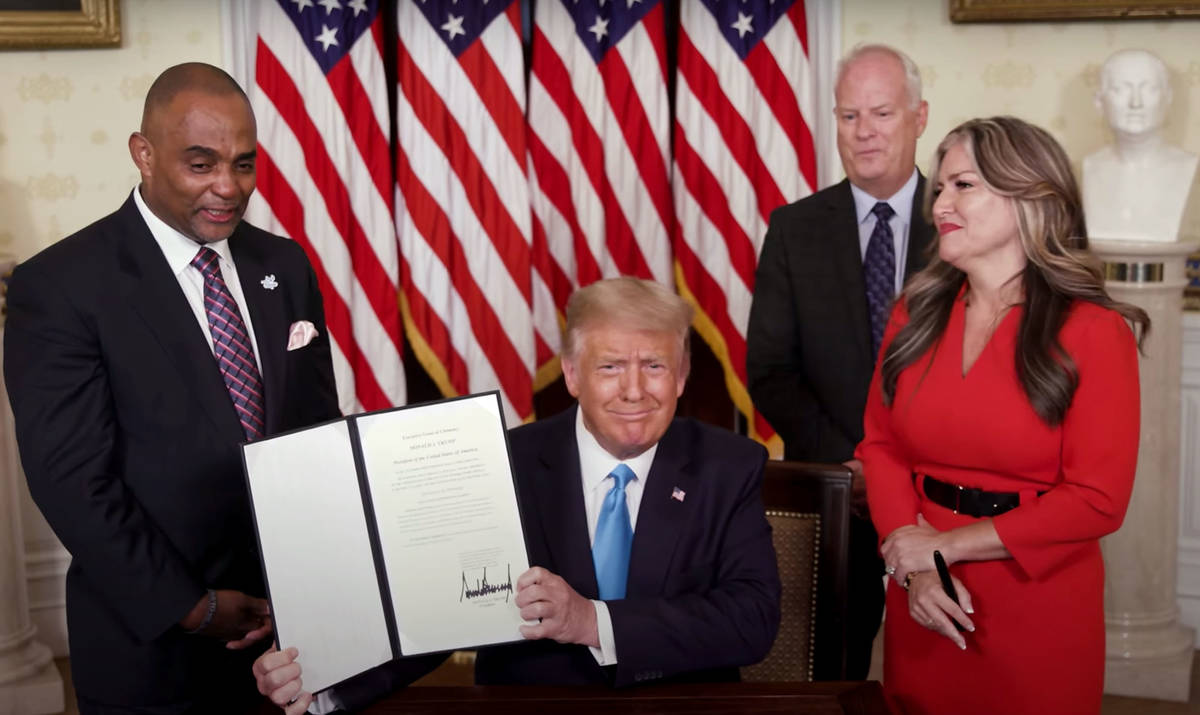 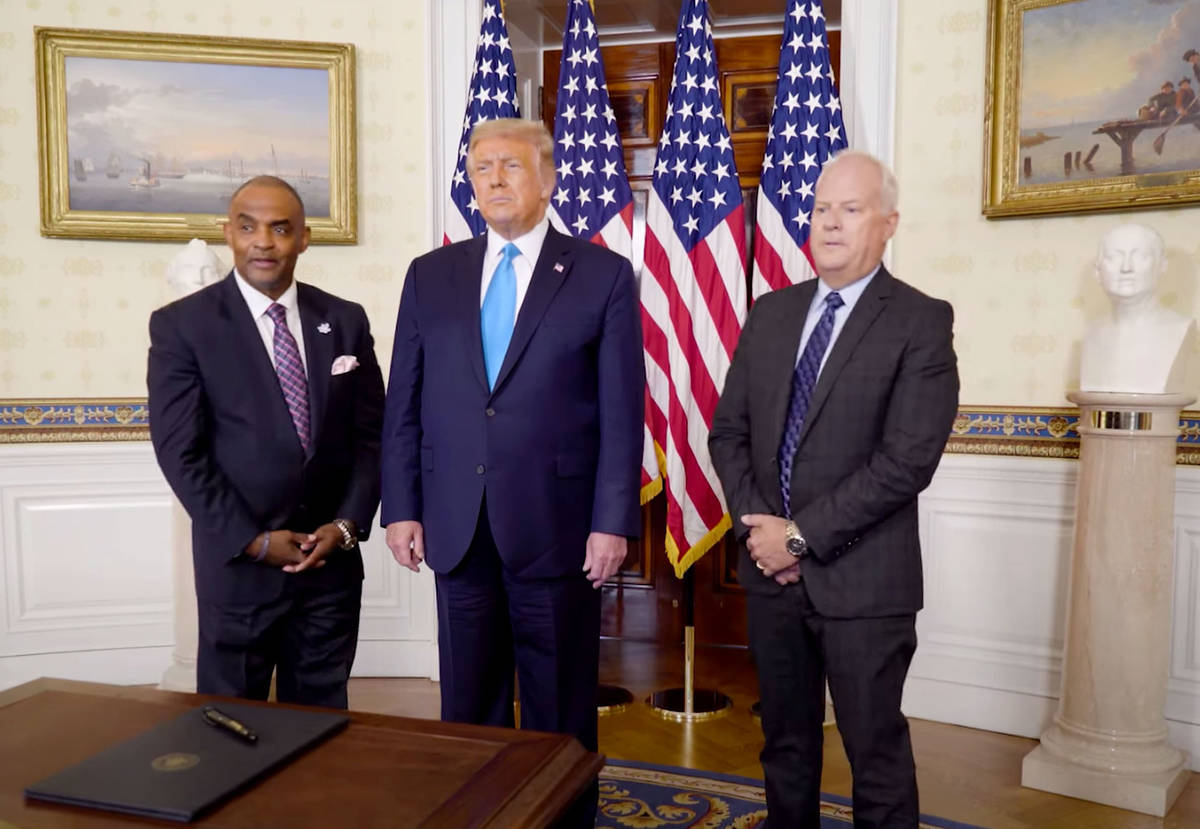 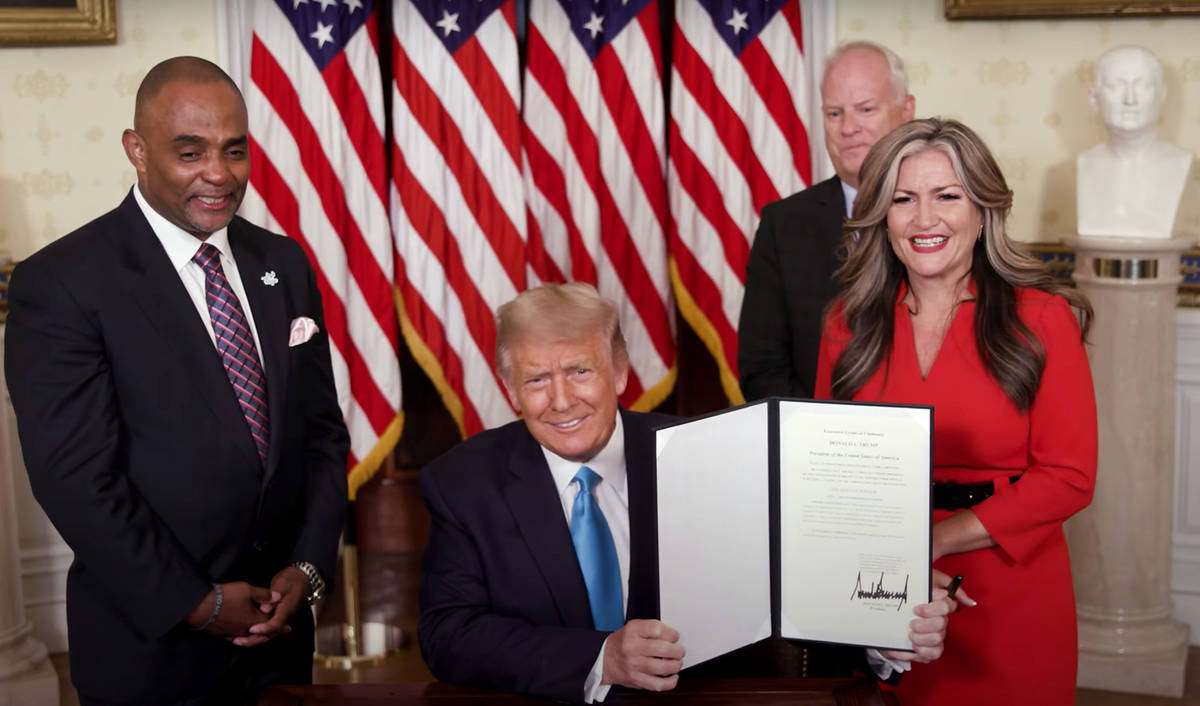 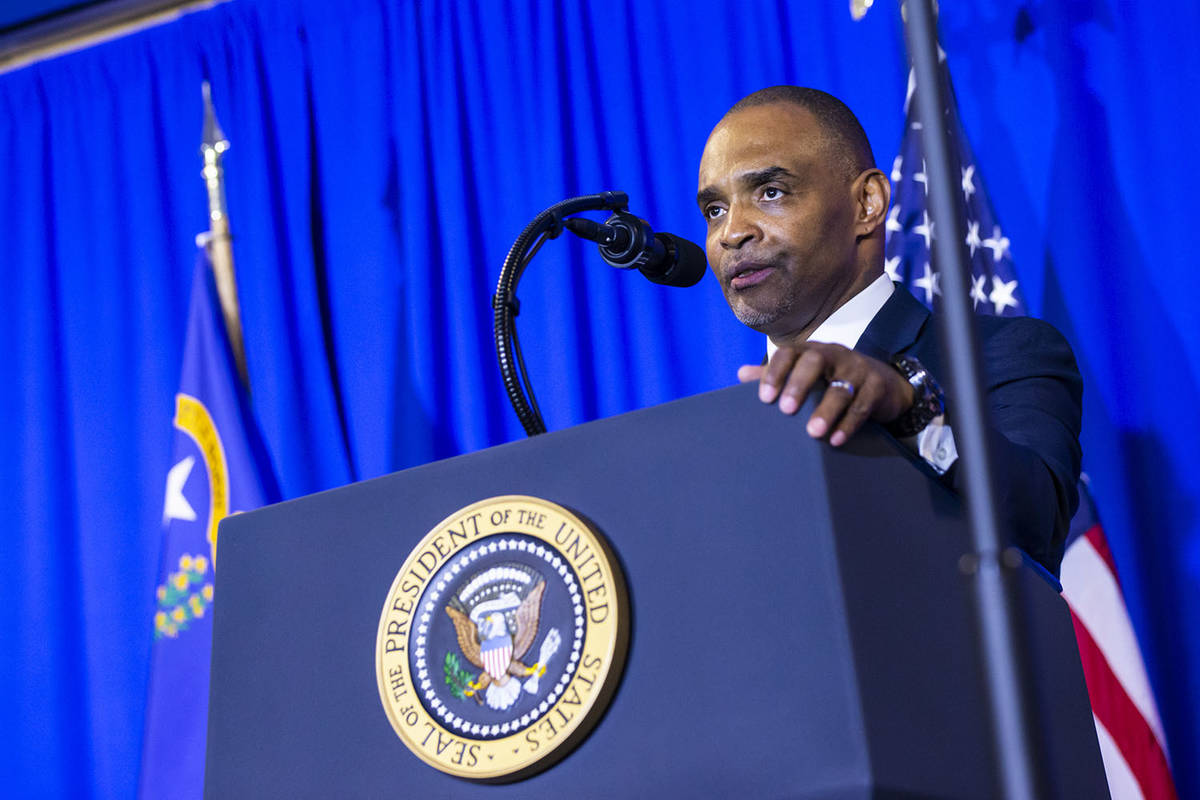 Joining Ponder in the White House to receive the pardon were Richard Beasley, the former FBI agent who arrested Ponder for bank robbery in Pahrump in 2004, and Ponder’s wife, Jamie.

Before signing the pardon, Trump recalled meeting Ponder and Beasley as the two men appeared together at a Rose Garden celebration for the National Day of Prayer in 2018. Trump lauded the two friends, saying, “Your story reminds us that prayer changes hearts and transforms lives. It uplifts the soul, inspires action and unites us all as one nation, under God. So important.”

In a video taped inside the White House before the RNC convened its second night with the theme “Land of Opportunity,” Trump pledged to give all Americans, including former inmates, “the best chance to build a new life and achieve their own American dream.”

It was a moment that checked off several boxes central to the Trump campaign agenda, as Trump and his guests appealed to people of faith, the Black community, law enforcement and Nevadans.

Ponder, a three-time felon, recalled how he determined that when he got out of prison he would turn his life around. “We live in a nation of second chances,” Ponder said as he thanked the Metropolitan Police Department members who volunteered their time to help Hope for Prisoners participants.

“My hope for America is that law enforcement and people in the communities across the country can come together and realize that as Americans we have more in common than we have differences,” Ponder said.

“A pardon is not something that happens often, and a presidential pardon is even more rare,” she said in a statement texted to a reporter. “As Jon Ponder’s attorney and the one who petitioned, presented, advocated and secured the pardon for Jon, I wish I was able to be present as this is a tremendous career highlight.”

Ponder received a conditional pardon from Nevada’s pardons board in March.

When they first met 15 years ago, Beasley recalled that Ponder was “angry, scared, frustrated and anxious about his future.” On the way to prison, he stopped at a convenience store and bought Ponder a coffee and a doughnut.

Beasley, now president of the Global Intelligence Network, also thanked Trump for his “strong support for law enforcement” before he noted that in certain parts of America, law enforcement officers feel second-guessed and unsupported for just doing their jobs.

Trump spoke at a Hope for Prisoners graduation ceremony for ex-offenders in February, the last time he was in Las Vegas. At the event, Trump mused about granting Ponder, who has served his federal sentence, a “full pardon” that would recognize Ponder’s transformation and restore his rights.

Alice Marie Johnson, a federal drug offender whose sentence Trump commuted in 2018, will speak at the convention Thursday night ahead of Trump’s speech accepting renomination for a second term in the White House.

The evening began with a prayer by another Las Vegan, pastor Norma Urrabazo of the International Church of Las Vegas, who spoke from the Andrew W. Mellon Auditorium in Washington, D.C.

Urrabazo opened with a prayer that recognized “hurting communities in Wisconsin tonight” and offered “healing and comfort to Jacob Blake and his family,” a reference to a Black man shot in the back as Kenosha police arrested him, and “protection over for those who put their lives in harm’s way to bring safety and security in our streets.”

It was a sign that the Trump team intended to handle the shooting cautiously as Attorney General William Barr has said the Department of Justice would investigate the confrontation, which was caught on video.

Democratic nominee Joe Biden released a statement on the Blake shooting Monday morning that said, “And this morning, the nation wakes up yet again with grief and outrage that yet another Black American is a victim of excessive force. This calls for an immediate, full and transparent investigation, and the officers must be held accountable.”

This month, Trump named her husband, Pastor Pasqual Urrabazo, a member of the President’s Advisory Commission on Hispanic Prosperity.