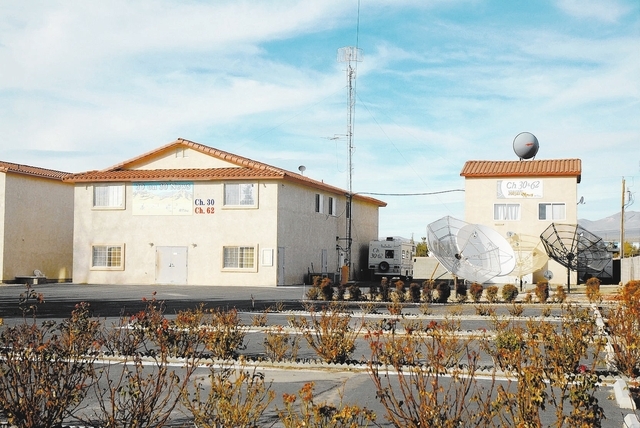 For years, a battle for advertising dollars to support three television stations here has stretched the budgets of local businesses needing to get products and services out to the public. Two of those stations will go off the air as their licenses are transferred to new owners.

Channels 30 and 62, KPVT and KHMP respectively, have been broadcasting both local and packaged programming in the Pahrump Valley for almost 10 years. Channel 62 was already on air in 2004 when Channel 30 applied for its license. The station has been broadcasting since 2005.

License owner Hilltop Church has been seeking a buyer since before the Federal Communications Commission ruled that all analog frequencies be replaced by digital transmissions more than two years ago. A deal between the church and DNV Spectrum Holdings LLC of Atlanta was signed Dec. 17, 2013 to sell the license for Channel 30 for $10,000 and the license for Channel 62 for $140,000.

The difference in value directly relates to the broadcast market. Channel 62 (digital channel 18) already broadcasts in Las Vegas and has a much larger audience than does Channel 30. Channel 30 is also analog and according to sources, the fate of the station is “up in the air.”

“It may not be around at all six months from now when the turn-off for analog stations becomes mandatory in July,” says one source who wasn’t authorized to speak on the record.

In essence, purchasing the licenses will give the new owners a foot in the door of the Las Vegas broadcast market without having to start from scratch — not that there is much available in the way of broadcast frequency.

Randy Cress, engineer for Hilltop Church, said the way technology has been integrated into the lives of younger people, “they don’t actually sit and watch TV anymore. Most young people get their music on their phones and their other entertainment and movies as well.”

Cress said the FCC is “taking back” low-power frequencies in order to repackage the bandwidth into sellable lots of air space and putting them up for auction. The buyers come in the form of those businesses providing wireless phone and Internet services. “There’s money to be made in the auction of the frequencies,” Cress said. “And Congress wants the money.”

An application to transfer the licenses to the new owners awaits FCC approval. The process should take between 45 and 60 days. The transmitter turn-off date is not set in stone but there has been a meeting between the former Channel 30/62 station manager and KPVM (Channel 46) to share accounts.

As the last standing television station, Vern Van Winkle, owner of KPVM, said “It’s a smart move on their part. This valley is too small to support three television stations. The content gets watered down and the battle for support from the advertisers doesn’t allow anyone to cover the costs of producing a commercial.”

He said the new owners of Channel 62 will also have the option of breaking the frequency into several other digital components. “They can do like we did with Channel 46 and add .1, .2, .3 and so on. They can have as many as eight digital signals under one license,” Van Winkle said.

He said the goal for KPVM has always been to provide content of local interest to the viewer. “The goal hasn’t changed since 1997 when we first went on air.”