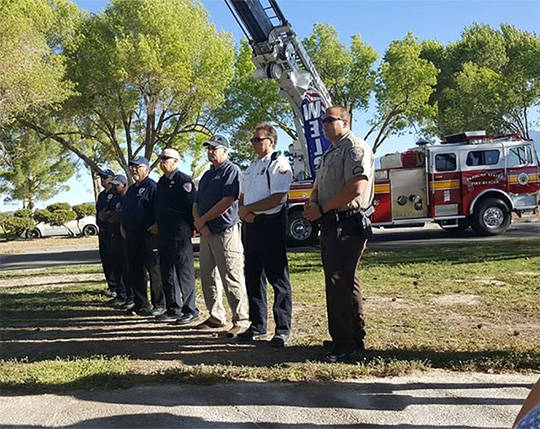 Horace Langford Jr./Pahrump Valley Times Pahrump and Nye County first responders took part in the unveiling of a Sept. 11 Reflection Area at the Calvada Eye in 2016. A 2017 9/11 ceremony is scheduled for Monday Sept. 11 at 8:30 a.m. to remember and honor those who lost their lives 16 years ago. 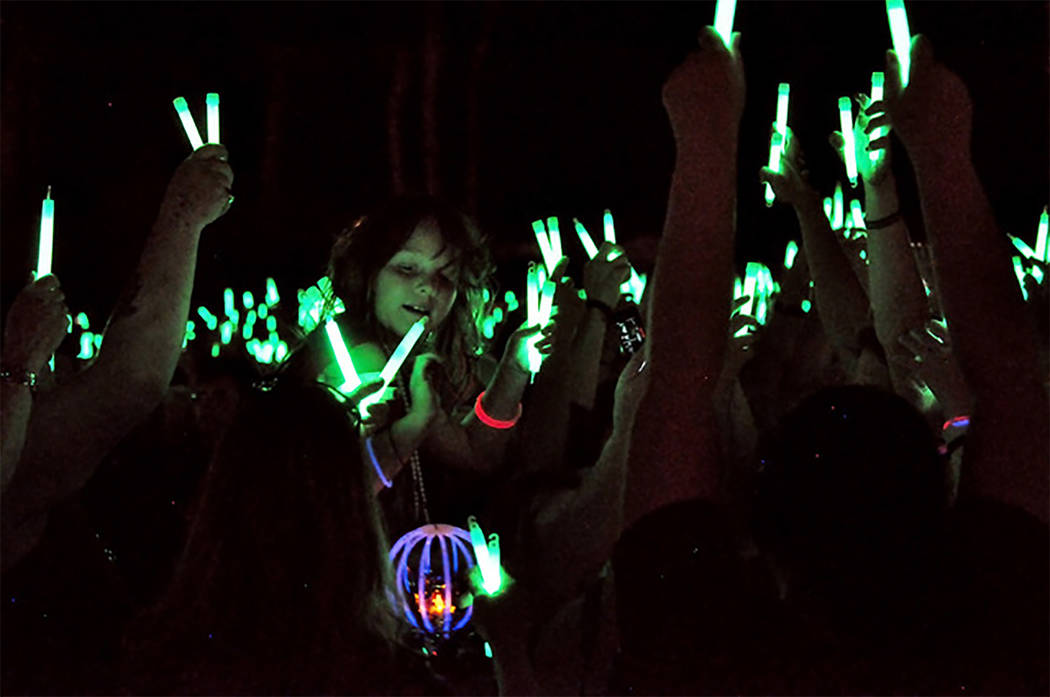 Horace Langford Jr./Pahrump Valley Times More than 1,000 people attended the local 9/11 remembrance ceremony last year. Thousands of glow sticks were given to families and individuals to hold aloft in memory of the tragedy. Monday evening’s 9/11 ceremony is scheduled to begin at 6:30 p.m. at the intersection of Basin Avenue and Highway 160.

It’s been 16 years since the nation’s worst terrorist attack in American history.

As Sept. 11 arrives on Monday, at least two observances are planned within the community.

The first of which is scheduled from 8:30 to 10:30 a.m., at the First Responders Memorial site in the Calvada Eye, organized by the Pahrump Rotary Club.

The Calvada Eye is located along Walt Williams Drive, just off of Calvada Boulevard.

The ceremony is scheduled to begin with the pledge of allegiance, followed by the “Star-Spangled Banner” and a brief prayer.

The ceremony will parallel with the exact moments the attacks occurred.

A moment of silence will be observed at 8:46 a.m. in Pahrump in memory of when the first plane hit the World Trade Center.

Monday’s second 9/11 ceremony is billed as a “Remembrance Event,” at the corner of Highway 160 and Basin Avenue, beginning at 6:30 p.m.

“September 11th is one of those events that touches everyone in different ways,” he said. “It depends on where you were and what you heard and how you heard it at the time. We just want the first responders to know that what they went through, and what we went through, is something that we will never forget. We just want to thank them. It’s primarily for the first responders. We chose a good location so that everybody will know that we are out there, and why we are there. That’s the key.”

As with the first ceremony at the Calvada Eye, Waters said the evening ceremony will also provide guest speakers.

Additionally, everyone attending will receive a glow stick to pay tribute to those who perished on that day.

“It should be a very poignant ceremony,” he said. “Fire Chief Scott Lewis will be there with a fire apparatus. Nye County Sheriff Sharon Wehrly will also be there. They will be the two main speakers, then there will probably be other people who can say a few words if they would like to. We are going to light up the corner at Basin Avenue and Highway 160.”

As a Lt. Col. in the Air Force, Waters recalled when and where he was when he first heard the news.

At the time, Waters was a high school administrator at Ramstein Air Base in Germany.

“I was just about to have a meeting with some of the teachers,” he said. “I called the meeting and we had the television on. The teachers were entering the conference room and somebody said did you see that? We were watching CNN and trying to figure out what in the world just happened. The CNN anchor was talking about a plane that flew into one of the World Trade Center towers. Not long afterwards we saw the second plane hit the second tower. We didn’t know what was going on in the states, so it hit us pretty hard.”