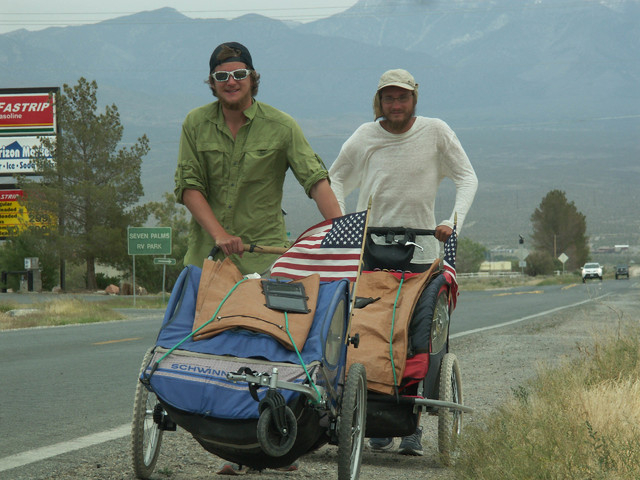 Michael Outinen and Forrest Sherman are on a journey of self-discovery while exploring the country.

These natives of Michigan are walking cross-country, making stops along the way to meet people, share their personal story and hear stories from people they’ve never met before or probably will never see again.

Their odyssey began on Dec. 5 in Jacksonville Beach, Florida, where they stocked up on supplies and headed west to Seattle. On Wednesday they ventured through Pahrump before heading into Death Valley.

Outinen, 23, grew up in Marquette, Michigan, and attended college in Detroit before leaving without a degree because work life took over. Outinen met Sherman, 24, who was finishing up studies at the University of Michigan and found jobs, but both seemed discontented with their lives.

“I was looking for different avenues of what I wanted to do with my life and my career and starting a family,” Outinen said. “Then it occurred to me that there’s a lot more in the world to see and do.”

Outinen said walking across the United States has always been on the back of his mind and he began thinking more and more about it for the past few years.

“I figured this was a good time in my life to do some exploring and actually finding myself,” he said. “You learn a lot about who you really are and you can also learn a lot about other people, it’s definitely a fascinating part of the voyage.”

The journey has offered the opportunity to discover, explore and at times, marvel at the sights, sounds and feel of towns and cities they otherwise wouldn’t experience.

Sherman, who charted the course, said he decided the duo should take a southern route through Mississippi, Alabama, Louisiana and Texas, ending up in Houston before continuing northwest.

“My favorite part of the trip has been walking in Mississippi along the beach right around Biloxi, which is kind of next to New Orleans,” Sherman said. “There is a very wide sidewalk next to the beach and it runs for about 40 miles. It was beautiful weather and it was a great place to be and a very enjoyable part of the walk.”

Roughly five months into the trek, Sherman and Outinen arrived in Pahrump from Las Vegas.

Outinen said he’s enjoyed the desert landscape of the Southwest.

“I don’t know if I ever want to visit again but I love the scenery of the desert mountains specifically,” he said. “I have never been to the Southwest but I love the snow-capped mountains and the background. The geography here is just absolutely gorgeous.”

Both men agreed that wind has presented some unforeseen challenges.

“We are both used to a lot of snow and we don’t mind if it’s cold out or when it’s raining but the wind is the worst part,” Outinen said. “It’s been pretty windy here and we have been walking against 30-mile-per-hour winds blowing against us. We’re conditioned to walk about 4 miles per hour, but with the wind you’re suddenly walking 2 miles per hour so it’s a lot more work walking in the wind.”

To alleviate undue physical stress and strain, both men use jogging strollers to carry their supplies, which Sherman said made the trip more manageable. Inside the strollers are small one-person tents, non-perishable food items, cell phones and other provisions.

“We have bicycle tires on the strollers so we are able to go over rougher terrain,” Sherman said. “We can carry about 80 pounds of stuff and it mainly consists of food, water, a tent and a sleeping bag. We had some mechanical issues with the original ones so we had to spend a few days in a small town in Texas where we got some new ones.”

The most important supply for both men is the one that weighs the heaviest, Outinen said.

“One gallon of water weighs about eight pounds and we each go through about a half a gallon of water a day,” he said. “I think of things that I can try to get rid of every day that I don’t need. Now I’m always thinking about what can I throw away or discard. Of course pushing it in a stroller is a little different than carrying it on your back.”

The kindness of strangers along the journey was something both men have encountered time and time again for the past five months. Outinen said though there’s still long way to go, he now has a different perspective on people in general.

“I’ve had a lot of people tell me that I have to watch out for the next person but we’ve been very blessed to have good luck and a lot of great company along the way,” he said. “A lot of people stop to see if we’re all right and they try to offer help to us. It’s absolutely unbelievable the amount of generosity most people have.”

Outinen also noted that many people have actually offered the pair rides and other help but they graciously decline, but there have been exceptions.

“If anyone wants to, we will gladly accept but it’s not something we really need,” Outinen said. “Occasionally people would buy us meals.”

Not everyone the pair encountered displayed the kindness and concern they’ve seen with others, especially when both are on the road. On more than one occasion, they were nearly run down by inattentive drivers, most recently while traveling into Pahrump from Las Vegas.

Both walk against traffic because it’s safer to see cars when they are approaching. They carry an American flag to make themselves more visible.

“We do occasionally have to dodge a car or two,” Sherman said. “While they are driving, some people are trying to put on their makeup or they are texting. It’s a very weird thing because too many people don’t pay enough attention. In fact, I believe we had four close calls on Tuesday with cars.”

Since they began, the men try to stay on marked highways and paved roads. Though they use an internet application to chart their course, Sherman said, it’s not always reliable.

“One day when we were walking through Texas we ended up in a farmer’s pasture and we were both being chased by cows,” he said. “Google Maps doesn’t always give you the best directions all the time and sometimes a shortcut looks pretty appetizing. We ended up in this farmer guy’s backyard and he was just so dumbfounded on how we made it there because we literally ended up in a field in the middle of nowhere. It was 20 square miles and we just ended up walking through his property to continue on and he had no problems with it. He was very cool.”

Outinen and Sherman would like to reach their destination of Seattle by July 4.

With roughly 1,100 miles to go, both said they have learned much about themselves.

“So far what I’ve learned about myself is that I rush through things a lot,” Outinen said. “I’ve learned now that it’s important to slow down and relax a little bit and not take things too seriously in life.”

Sherman, on the other hand, said he learned something too.

“I’ve learned that I love water and I love Michigan,” he said. “When you going on a venture like this and cross so many different states you tend to forget about what you have back home. When you walk more than 200 miles and not see a lake or a river or anything like that, you’re going miss it back home where you grew up. For me, it’s the Great Lakes.”

Family support both men’s adventure said was very important as they began their journey.

“I was kind of unsure about what they would think at first but I got way more support than I thought I would for it,” Outinen said. “Some of my family and some of my friends thought I was crazy. After doing this and talking to a lot of other people it becomes a very unique experience.”

Sherman meanwhile, said his mother had a different perspective on his decision to walk across the country.

“My mom was hysterical when I left,” he said. “It was an ‘oh my god what are you doing’ kind of hysterical. I don’t think my family expected me to last for more than a few weeks, but here I am.”

As far as any advice for anyone who is considering doing a similar journey, Outinen said the person should avoid procrastination and jump in feet first.

“I think I planned more than I needed to for something like this,” he said. “I think people expect months and months of planning but if there’s something that big on your mind that you want to accomplish, the only way you’re really going to do that is get to it right away. You can think you have everything planned out in your head but what it comes down to is, you learn as you go.”

After spending about a week in Seattle, both men will make their way back home to Michigan. Outinen said they plan on getting there by a much faster means of transportation.

“We were thinking about bicycling on the way back. I can tell you we definitely won’t be using a motorized vehicle.”