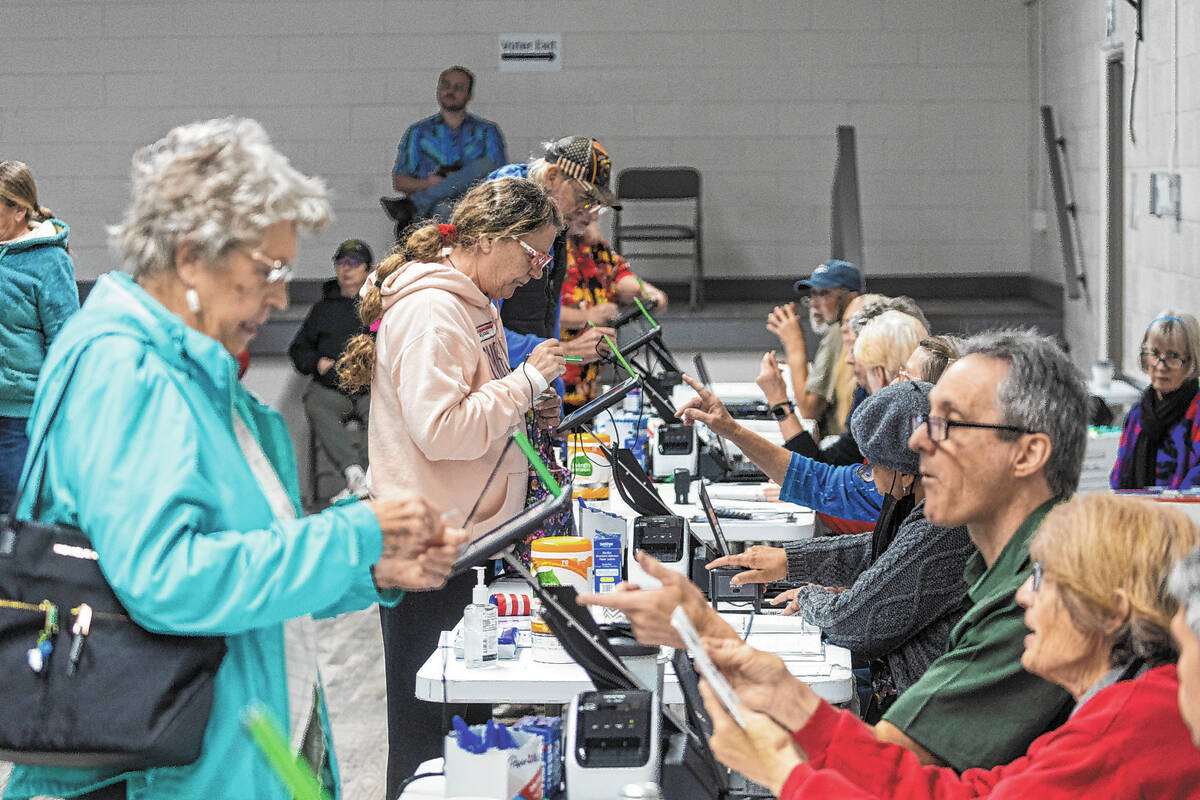 More than 61 percent of registered voters turned out in Nye County to cast ballots in the 2022 midterm elections, according to data from the county clerk’s office. Data shows 14,215 (about 42 percent) of the county’s 20,883 voters who particated in this election cast mail ballots, while 4,161 voters (about 12.3 percent) voted early at polling stations in Duckwater, Pahrump and Tonopah. The remaining 2,507 voters (about 7.4 percent) went to the polls to cast their ballots on Election Day.

County commissioners are expected to canvas the returns at 10 a.m. on Friday.

Until then, here are the unofficial vote breakdowns from Nye County through Tuesday, Nov. 15 for most of the contested races listed on the ballot.

A ‘*’ indicates the overall projected statewide winner of each race.

U.S. Sen. Catherine Cortez Masto faced one of the toughest re-election bids among Democratic incumbents in a race that played a significant role in determining which party controls the upper house of Congress heading into the second half of President Joe Biden’s first term.

U. S. REPRESENTATIVE IN CONGRESS DISTRICT 4

A slugfest played out in Nevada’s 4th Congressional District where U.S. Rep. Steven Horsford won statewide by touting his legislative accomplishments. He fended off Republican challenger Sam Peters, who tapped into the Trump-era outrage over border security and crime. Peters proved popular in Nye County where he garnered more than twice the votes of the Democratic winner.

Incumbent Gov. Steve Sisolak couldn’t win re-election for a second term against strong Republican challenger Joe Lombardo, the two-term sheriff of Clark County. The COVID-19 pandemic overshadowed much of Sisolak’s first term in office and his platforms — especially when it came to education vouchers — weren’t popular with rural voters, especially those in Nye County which helped tip the election for Lombardo.

Las Vegas city councilman Stavros Anthony will be Nevada’s next lieutenant governor after defeating Democrat Lisa Cano Burkhead. The Republican was popular in Nye County where he edged his Democratic challenger by a more than 2-to-1 margin.

The race was arguably the most important on the statewide ballot in November, outside of only the races for U.S. Senate and governor. Winner Cisco Aguilar will be able to exert control over how elections are conducted in Nevada for the next four years. While Republican Jim Marchant was the favorite in Nye County, his election-denying tactics and claims of fraud in the 2020 race for president, did not win over most of the state’s voters.

Democrat John “Doc” Garrard came up short against Republican Bert Gurr, a realtor who has lived nearly 50 years in Elko County. Gurr says he wants to “limit the governor’s emergency powers, protect our First Amendment right to free speech, Second Amendment right to bear arms, and get rid of all unfunded mandates and illegal mandates.”

Nevada state assemblymen represent an average of more than 73,000 residents in 42 districts. District 33 was redrawn this year and includes parts of Nye County as well as Lincoln and Elko counties.

Kampf has already been handling much of the clerk’s duties after being sworn in as interim clerk this August following the retirement of longtime clerk Sam Merlino. The win means Kampf will secure the position for the next four years and oversee the administration of Nye County’s elections.

After thumping the incumbent Nye County district attorney in the June Republican primary by nearly 20 points, Brian Kunzi defeated Democrat Nicholas Del Vecchio this month by a nearly 3-to-1 margin. Kunzi previously served as the county’s district attorney and has more than 30 years experience as a litigator — 20 of those as a prosecutor. The district attorney is largely responsible for working with law enforcement to prosecute criminal cases.

Incumbent Ginger Stumne secured twice as many votes as her two challengers combined to retain her position for another four years. The role of the public administrator is to oversee the estates of deceased people in Nye County who have no qualified or willing survivor to do so.

Deborah Westbrook, who has served as chief public defender for Clark County for nearly the past decade beat Rhonda Forsberg to secure the bench in this court of appeals race. Rhonda Forsberg currently serves as judge for Department G of the Nevada 8th Judicial District Court Family Division which includes all of Clark County.

Four top vote getters will have a seat on the Beatty Water & Sanitation District Board, which manages water quality and conservation as well as the town’s sewer system. Albert Verrilli, who currently serves as vice chair of the board, will lose his seat after coming in last in the five-way race by fewer than five votes. In a tight race like this, it proves your vote definitely counts.

Nancy L. Maslach and Cheri Harper have won seats on the board in this three-way race. The Board of Trustees consists of five members elected to four-year terms and must reside within the boundaries of the Hospital District, which was created in May 2015 by the county commission. Trustees aim to facilitate the provision of accessible health care services to the residents of and visitors to northern Nye County. Nancy Maslach currently serves as secretary-treasurer for the board.

Chelsy Fischer, Nathan L. Gent and Roger Morones were elected to the board of trustees for the Nye County School District. The board is governed by seven trustees who are elected from specific areas for four-year terms.

School Board meetings are held every three to four weeks, and are mainly located in the Southern District Office Boardroom. The Board of Trustees meets at least once a year in outlying communities.

Carolyn Allen, Brenda Dymond, Scott Harris and Sara Rivers emerged as winners of four open seats on the Amargosa Valley Town Board. Board meetings are scheduled the last Thursday of each month at the town’s community center.

Challenger Joe McGill upset incumbent Sheriff Sharon Wehrly by a wide margin in what became “the race to watch” in Nye County this election season. An informal poll by this publication found McGill with a 4-point lead just before early voting started in October, but McGill led by as much as 27 points after early returns. The Nye County Sheriff’s Office works with the community to enforce the law and prevent crime.