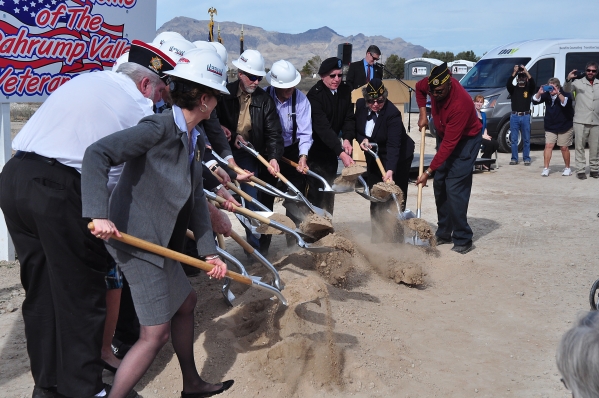 U.S. Sen. Dean Heller, Congressman Cresent Hardy, and a representative from Senator Harry Reid’s office were among the federal delegation who traveled to Pahrump for the 11 a.m. ceremony.

Heller noted the sheer tenacity among veteran groups over the years, who saw the project through from the beginning.

“The veterans have called me, texted me, emailed me, and my job is to answer back and today is a success story,” he said. “I know this is been a very frustrating process, and when I got elected in 2006, this was one of the first things that I worked on. It’s a pleasure for me to be here and to be a part of this groundbreaking.”

Heller made sure to note the groundbreaking ceremony does not close the chapter on the effort.

Hardy called the ceremony a milestone, after what has been a very long process.

Hardy also said he too, expects to hear concerns from all veterans as construction continues on the $12.1 million 10,000 square-foot facility.

Prior to her remarks, Peggy Kearns, director of the VA Southern Nevada Healthcare System, noted the view from what will be the entrance of the facility.

“That is a beautiful view of Mount Charleston and that will be the view out the front of your clinic,” she said.

Kearns also spoke about the timeline when in 1999, the Southern Nevada Healthcare System opened the Pahrump VA Clinic at the Pahrump Medical Center.

At the time, the number of local veterans using services was upward of 650.

Operations were moved from that facility to a nearby location in 2001, while planning for the present 4,800-square-foot facility along Calvada, began in 2002.

“We moved into that location in February 2003, and were able to accommodate twice as many veterans,” she said. “But in many respects the facility was already too small when it opened, as we expanded services and the veterans’ population at the time had grown to nearly 1,500.”

At present, Kearns said the Calvada clinic serves a population of roughly 2,400 veterans, which is at its capacity.

“When this new state-of-the-art 10,000-square-foot facility opens, our Pahrump medical team will be better equipped to provide high-quality care to current and future veterans for many years to come,” she said.

“Governor Sandoval has worked very closely with the Veterans Administration to make sure that this has come to pass and he also looks forward to providing the best possible wellness and benefits to all of the veterans in the Pahrump area,” she said.

Robert “Bob” Herbert, senior policy adviser and director of appropriations for Senator Reid, said getting to the groundbreaking was a long journey.

“I worked for Senator Reid for 20 years and this project has had more fits and starts than anything I’ve worked on,” Herbert said “It’s just awesome that it’s finally coming to fruition and Senator Reid is extremely happy that this is finally moving in the right direction.”

Neenan is partnering with government real estate specialist WD Schorsch LLC / Pahrump VA LLC for the government lease-back project, according to its website.

No timeline on construction was available.