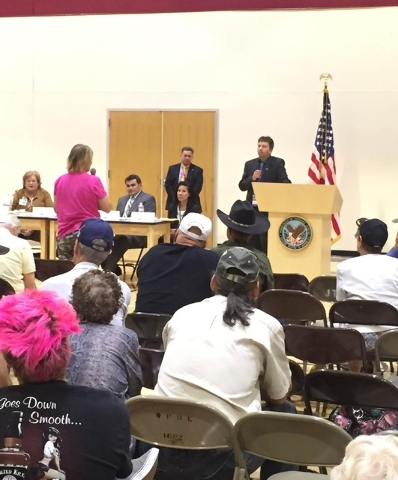 Approximately 100 people turned out for the event at Pahrump Valley High, which acting Medical Director at VA Southern Nevada Bill Caron said he was happy with.

Caron admitted that the area’s VA health care for the 6,000 veterans in Pahrump is a work in progress, one that he hopes is corrected soon.

“We’ve got work to do in Pahrump,” he said. “The good news in Pahrump is that we’ve had a clinical presence here since 1999, serving about 2,400 veterans. I will tell you that staff that I have had the opportunity to meet several times, are just unwavering, persevering and provide great care whenever possible.

Veterans took turns airing their issues with their experiences with health care, in a lottery system, as those interested in speaking were given a number, which was drawn at random for their time to speak.

One such issues was spoken about by Ed Fox, who had issues with the phone systems at the main clinic in Las Vegas.

“I’ve been out on hold for 20, to 25, to 30 minutes and then it doesn’t go to the individual department,” Fox said. “It goes someplace else. I don’t understand.”

Although there were various questions about claims and phone wait times, questions about the long-delayed VA clinic were brought up throughout the 90-minute meeting. The new facility is scheduled to be built near Desert View Hospital on South Lola Lane, which would almost be double the size of the 4,500-square-foot rented facility in use now on Calvada Boulevard.

The clinic has been in planning for the better part of the last three years, with various issues being cited as reasons why construction has yet to begin.

An update on the clinic was given at the town hall, and a tentative timetable was given to the long-awaited project.

“The anticipated award of that contract is in August,” Caron said. “So we are approximately a month and a half away from that award. After award we are looking at an 18-month to 24-month design, build time frame.”

The contract was supposed to be awarded this month, but a pricing issue by the potential awardee caused yet another delay, as the two sides review the updated pricing plan, according to Brian McClung, chief engineer of Veterans Affairs.

Rep. Cresent Hardy, whose district includes Pahrump, spoke about the project to the House of Representatives Wednesday morning, emphasizing the importance of the clinic.

“We live in America, a nation conceived in liberty, consecrated by the service and sacrifice of our military men and women,” Hardy said in his minute-long speech. “We promise to care for their health after they come home from battle, and yet too often we delay making good on the promise. Specifically, why the veterans of Pahrump, Nevada had a promise of a new clinic dangled over their heads for years.”

With construction being approved last year, there has been no work done on the facility and Hardy hoped the area veterans would get answers, mentioning the town hall meeting.

“Construction was finally approved nearly one year ago … after one year the grounds remained unbroken,” he said. “Later today the VA is holding a town hall in Pahrump. My staff will be there to hear the latest updates.

“Let’s not leave our veterans with more unmet promises. We can do better for the more than 8,000 veterans of my district of Nevada,” he said.