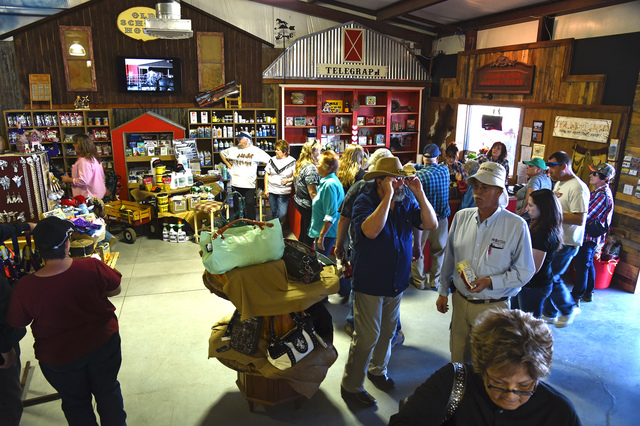 Valleys Edge Country Store owner, Cary Jubinsky, always wanted to open a store with an old town feel, and a chance opportunity helped bring that dream to fruition after moving back to the valley following a brief hiatus from town.

“My son and I decided to move back (to Pahrump) and came down April 1st during spring break from Montana, and they were putting it [the store] back on market for sale,” Jubinsky said. “My brother out of California and I had been looking into different businesses to venture into, and it happened to be that day, we talked to the realtor and here we are today.”

A self-proclaimed, bad sketch on an oversized piece of paper helped turn the local business owner’s dream into reality.

“I started this from… a sketch of what I envisioned this to come out like and I can’t draw at all,” Jubinsky said. “Then I hired a retired old friend of mine that’s built a couple of old towns before, and we spent about two months, spending every breathing moment in here and getting dirty painting.”

Jubinski took over the space that used to be Windrock Ranch Country Store, a business that she was the project manager for during construction of the building, and then later helped manage the store as well.

Valleys Edge has been open since November, but had their official grand opening celebration Saturday. Jubinsky raved about the turnout from the valley, stating that around 1,000 people showed up throughout the day.

In addition to selling goods to the customers, educating the community on a variety of topics is something Jubinsky is passionate about.

“We have a customer computer to do any kind of education,” she said. “If somebody comes in and says, ‘Hey, my horse’s back has got this strange thing and I saw a YouTube (video), but it doesn’t have to be an animal, they can ask any question they want.”

The computer, which can also be displayed on the wall-mounted television, will be used to conduct classes on a variety of topics, as Valleys Edge, “strives on education,” Jubinsky said.

Valleys Edge has everything from feed, grain, hay, antiques and more, with the goal being becoming a one-stop destination for customers, offering a variety of goods for those with and without animals to care for.

Not only does Valleys Edge sell their own goods, they also help others sell their goods and offer their property as a meeting place for others to swap product.

“We also have the antiques and collectables area where we do consignments for people,” Jubinski said. “We help people trade and sell things as well. We purchase from people. Again, it gives a more diverse direction.”

Having a close relationship with the customers is something Jubinsky aimed for originally and in a short time she’s been able to turn consumers into friends.

“We strive on making everyone happy,” she said. “We know everybody by first name that comes through the door. We’re pretty much almost on a hugging level with everyone, if you will. When they come in it’s a family atmosphere. We have stools for people to come in and hang out.”

With the store grand opening past them, Valleys Edge can focus on expanding their product line, to include more clothing and adding boots, among other things to build toward that “one stop” goal.

“We just want to create someplace fun,” Jubinsky said. “We have plans of the future of Valleys Edge and that’s got a covered arena, and just tons of stuff and again you don’t have to own an animal to want to come to Valleys Edge, it’s worth the drive.”