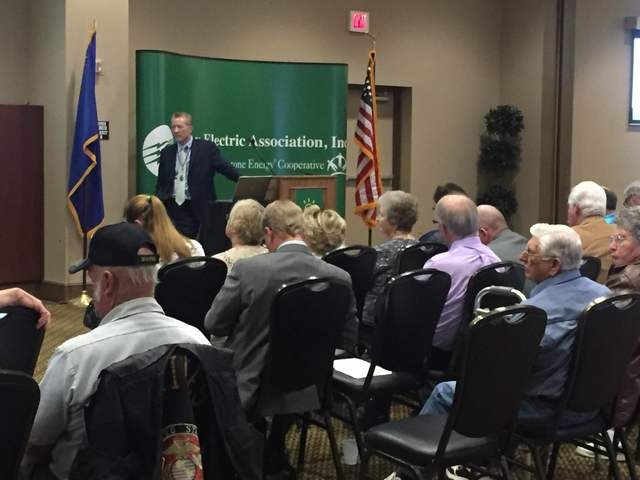 Valley Electric Association, Inc. held its first of six district meetings Tuesday evening, aimed at informing members of the cooperative of the past year’s accomplishments as well as looking toward the future.

The past achievements were touched on briefly, but the upcoming projects served as the bulk of the presentation.

Speaking to VEA members of District 1 at the Pahrump Nugget Hotel and Casino, Chief Executive Officer Tom Husted broke the news that the co-op was tentatively planning an accelerated rate hike July 1, instead of the January 2017 date.

“Here we are, six months before we said we were going to do that, saying we’ve got to pull the trigger now,” Husted said. “We need to move forward with a small rate adjustment this year. Single digit.”

The crowd didn’t react much to the news of the first rate adjustment from VEA in six years, except when Husted made an error saying it would be a six-digit increase. When he corrected himself and explained it was a single-digit one, the crowd seemed at ease and shared a laugh with the CEO.

The rate hike is going to be no more than 9.99 percent, according to Husted, and is tied to the cost of doing business over the last six years. Projects like solar, broadband, Creech Air Force Base and the Nevada National Security Site were all mentioned as contributing factors.

VEA has commissioned a cost-of-service study by Black and Veatch, an independent third party, to evaluate VEA’s services over the five rate classifications.

The study will be complete in the next 30-60 days and the board of directors will not consider a rate increase until after reviewing the study.

Another major point of the meeting was VEA’s subsidiary Valley Communication Association and the pending launch of broadband service in the valley.

VCA is ready to launch a wireless-based service to offer their Internet service as soon as possible while the full fiber-optic build-out is complete in town.

“Sometimes Pahrump is not the most patient community,” Husted said. “We need to flood the valley with wireless (Internet) like they’ve never seen.”

With a dozen sites placed around town, VCA will utilize WiMax service to give members up to 25 Mbps Internet speeds for $49.95 and when their area is set for the fiber-optic broadband service, all they have to do is plug into the service and for the same price as their wireless Internet their speed will double, with the lowest offered speed of up to 50 Mbps.

Husted hopes offering the initial wireless service first will allow for the engineering team to be able to finish installing the fiber-optic wire system in a timely and precise manner to provide the highest quality of service once complete.

Husted explained that having reliable, fast Internet speeds will benefit the community in an assortment of ways.

“Businesses will want to come here (because of the Internet),” he said. “We have already been contacted by very large companies, some of those have databricks, big data centers, that are looking for areas such as our valley where they can put in a data center where they have high-speed capabilities.”

By continuing to add new services and infrastructure, that means that VEA needs more employees to handle such ventures.

“That also allows us to diversify our workforce and bring more people on,” Husted said. “Thirty new positions now, and 30 right behind those. So you take a company that was down at one time to 80-something people and now we’re looking at 160.”

The 80-acre community solar plant is also forging ahead, which will offer more than just the power benefits that come with a renewable energy project.

“One of the things that’s really exciting about this is that it’s not a normal solar field,” Husted said. “When we do deliver the output to you, it will be through virtual net metering. It will be just like it’s on your roof, we will apply it to your account at a cost less than what you’re paying now.”

The design of the solar project is also unique as it is being built to create as little environmental impact on the area as possible.

“Half of the solar site is built under normal standards,” Husted said. “The other half we tagged up with entities such as Fish and Wildlife to say, if you could build this what adjustments would you make?”

With their help, VEA built it to accommodate the tortoises in the area, by building doors that the animals can go in and out of.

Also, to help cut down on bird incidents that many solar sites see, which end up injuring and even killing birds on numerous occasions, VEA designed the site on different levels in order to take away the illusion that the solar panels are water, which is the cause of the majority of avian incidents.

The solar site will also have an educational component to it as everyone from elementary to college-age students can utilize the site to learn various aspects of solar energy and the surrounding area.

“We then get to tag up with people like UNR, UNLV, because students are going to be studying this also,” Husted said. “There’s an academic achievement here also. Not only for students coming from the universities, but local students also.”

The solar site should be complete sometime this summer and the on-site learning center will be part of that.

“We can bring groups in and go over the details of the solar field,” Husted said. “It’s a great educational opportunity for our students.”

Another project on the horizon for VEA is a transmission project titled the Delany Colorado River Transmission Project. The project involves a transmission line that will run from California to Phoenix, Arizona.

DCR Transmission LLC won the bid to construct the transmission line. They are going to build it and VEA is going to be brought in to operate, maintain and manage the site.

“I’m jazzed about this one because this is new money coming in,” Husted said.

The transmission site should be complete in four years and VEA will run the project locally.

“Beginning in 2020, under contract we will operate, maintain and manage a 500,000-volt transmission line between California and Phoenix,” Husted said. “Guess where we’re going to get that from? Right here in Pahrump through high-speed communications.”

If the transmission line needs any service, VEA will use hired contractors in the area of the project.

Husted said that the project will bring in about $500,000 annually, that will go straight to VEA’s bottom line.

The same company wants to purchase VEA’s transmission system, but then hire the co-op to continue to manage and operate the system.

“Not only then will we get the reliability… not only do we get to control the quality of that, but we get to guarantee ourselves to the best of our abilities to hold those rates.”

Husted explained that deal would provide long-term rate stability, and on the heels of the pending rate increase this year, the selling of the transmission line could result in a rate decrease.

“We don’t have the burden of the ownership of that, but we get all the benefits of using it, the reliability, the jobs and economic development activities.”

Other projects were spoken about by Husted as well, including the campus expansion at VEA’s headquarters in town, the addition of a Las Vegas business center for the co-op to strengthen ties with key government and political figures, smart farming utilizing wireless Internet and cyber security.