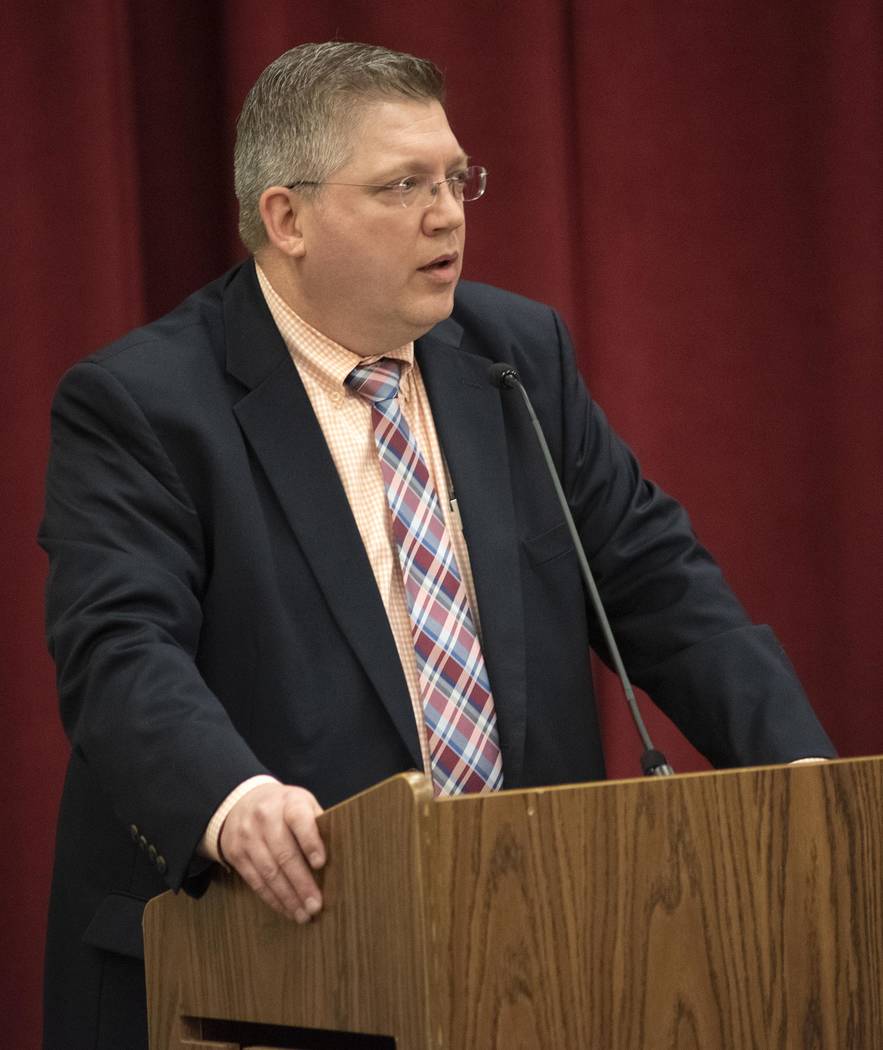 Richard Stephens/Special to the Pahrump Valley Times Chief Financial Officer Steve Morrison explained that a rate hike had been rescinded back at the beginning of the recession in an effort to help the member customers.

Richard Stephens/Special to the Pahrump Valley Times The District 3 annual meeting was the first time for Valley Electric Association executives and board members to face members in Beatty since the recent rate hikes. 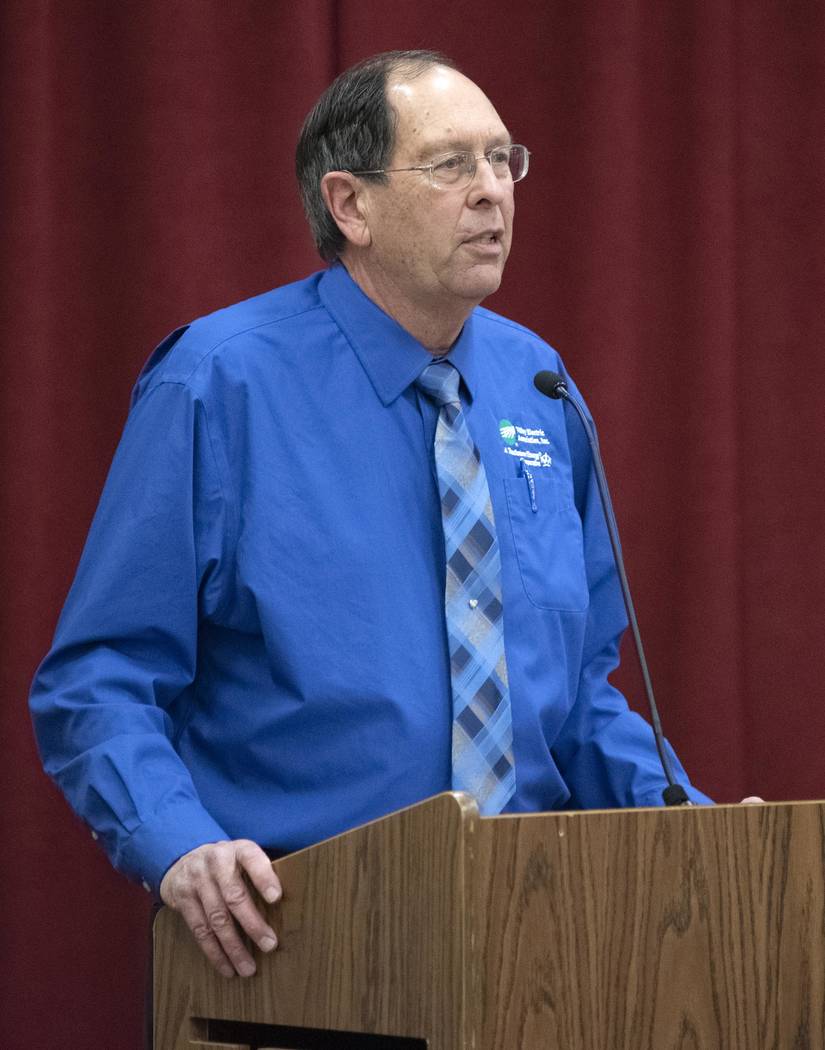 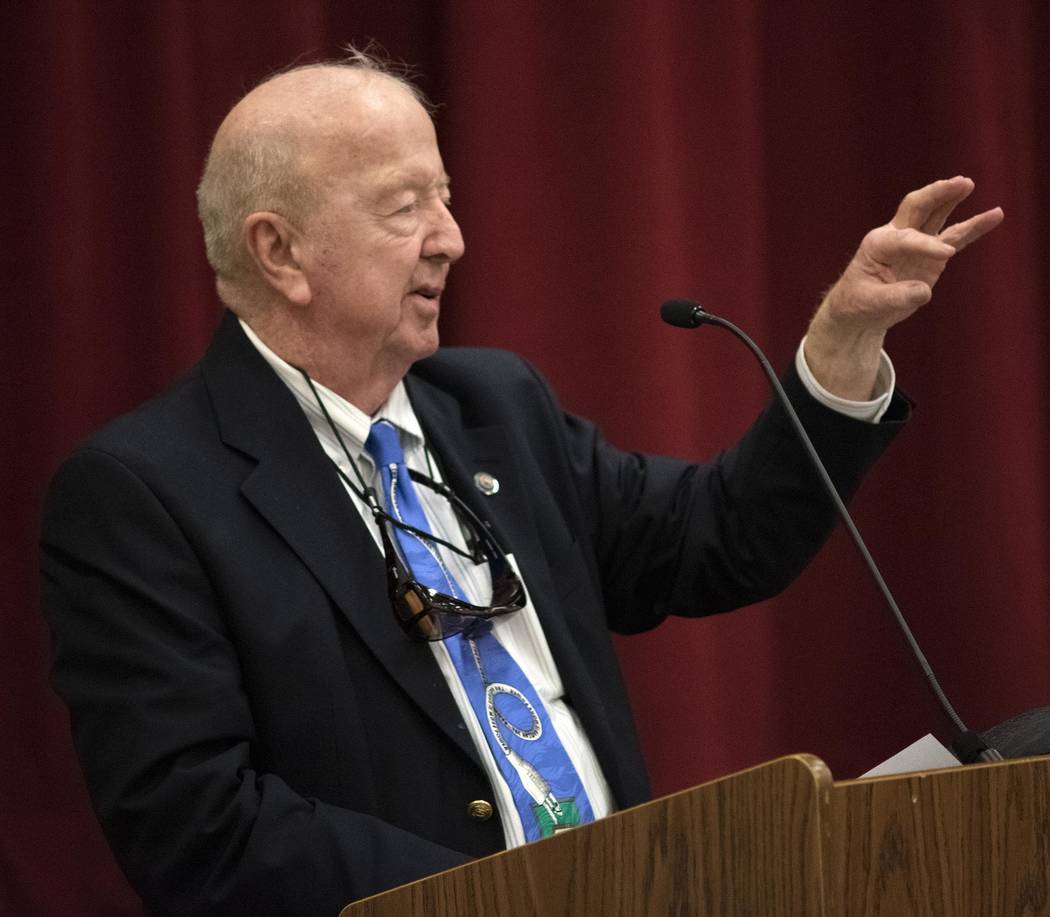 Richard Stephens/Special to the Pahrump Valley Times Interim CEO Richard Peck underscored the company's dire financial situation by revealing that VEA was $1.1 million in the red for the month of January alone.

The District 3 annual meeting in Beatty March 5 was the first time for Valley Electric Association executives and board members to face members since the recent rate hikes and the instigation of a sheriff’s investigation into the company.

Anger at the rate hike was partly driven by the assertion by former CEO Tom Husted at last year’s meeting that the company had “rate stability” and did not anticipate a rate hike at least until 2024.

District 3 Director Richard Johnson acknowledged that by saying, “We said a year ago we had rate stability through 2024. You feel betrayed. We feel betrayed ourselves.”

Chief Financial Officer Steve Morrison explained that a rate hike had been rescinded back at the beginning of the recession in an effort to help the member customers. The company knew that rising costs would have to be dealt with in the future, but Husted had a plan to offset those costs by finding other sources of revenue to compensate for the higher cost of power.

The trouble with that plan is that the sources of additional revenue did not develop as planned. Morrison said that the revenue from Valley Communications broadband services has been half of what was anticipated, and the other potential revenue sources were dependent on the passage of Question 3, which was defeated in the last election.

This left the company facing the increased cost of power without the increased revenue needed to offset it. Before making the power rate hike, the company cut costs by $11 million, partly by cutting 30 employees. This did not eliminate the need for a rate hike, but did reduce it from 24 percent to 9 percent as calculated by an outside study.

Interim CEO Richard Peck underscored the company’s dire financial situation by revealing that VEA was $1.1 million in the red for the month of January alone.

Beatty fiber-optic broadband customers were particularly upset by the large increase in the cost of internet service, since the hike came within the first year of service.

Morrison explained that Valley Electric had been subsidizing Valley Communications for over two years, and that it now needed to stand on its own. He said that the high-speed fiber-optic service was still a good bargain compared to the same level of service elsewhere.

In his remarks, Johnson said there was “no validity to the criminal accusations against Valley Electric.” He said that the company had “come out squeaky clean” from an outside audit, and that the accusations were being driven by a disgruntled former VEA employee.

Peck said they needed more member participation in the ambassador program in rural areas, and said he would direct the board to provide transportation to quarterly meetings in Pahrump.

Meanwhile, Beatty resident Jerry Hammes, who was helping circulate a petition to recall the board of directors, handed Peck his VEA ambassador T-shirt, saying he could no longer serve as an ambassador “in good conscience.”

Johnson acknowledged mistakes had been made, but speaking of the board of directors, he said, “We take our responsibility seriously.”

He said that VEA had to win the members’ trust back. “Give us a chance. We are committed to repairing this. We can ride this storm out, and we will.”