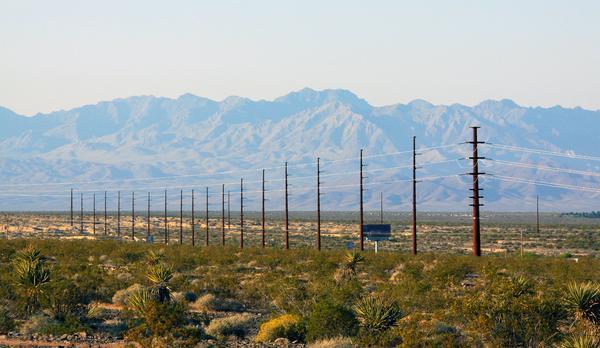 Valley Electric Association, Inc. approved the proposal to sell its 230 kilovolt transmission system, which encompasses 164-miles of high-voltage transmission lines for about $190 million. The sale is contingent on a two-thirds vote from the VEA member-owners. Special to the Pahrump Valley Times. 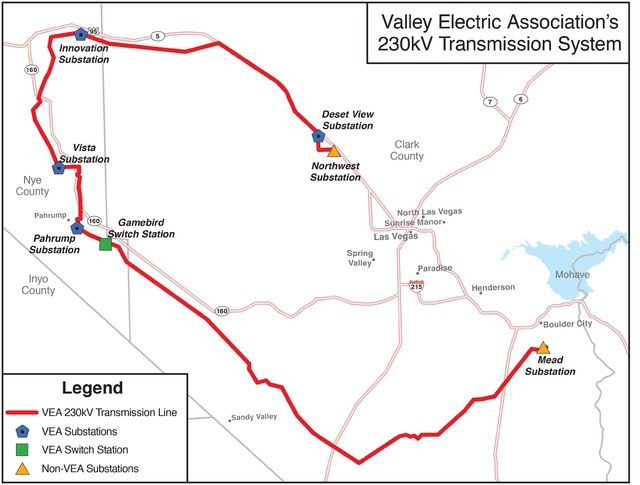 Map of the 230 kilovolt, 164-mile long transmission system Valley Electric Association, Inc. will sell if approved by a two-thirds vote by its member-owners. Special to the Pahrump Valley Times

Valley Electric Association, Inc. is set to sell 164 miles of high-voltage transmission lines it owns throughout Southern Nevada for an estimated $190 million.

At its board of directors meeting Tuesday morning, VEA approved the proposal to sell its 230-kilovolt transmission system. The transaction would net the cooperative almost 2.4 times the initial $82 million it invested to construct the transmission lines.

The sale, which has two companies with formal bids put in that are confidential at this time, now awaits approval of VEA members, as the transaction is contingent on a two-thirds vote, roughly 12,000 member-owners, for the deal to go through. The vote will be conducted by an independent third party, where members could cast their votes in person at designated locations, via mail, on the internet, or by proxy.

If the sale receives the 66.6 percent of votes needed in the special election to be held Sept. 14 through mid-October, the sales transaction will be completed in late 2016 or early 2017.

If the members vote to approve the deal, not only will VEA itself capitalize on its investment, the member-owners are set to cash in as well.

The proceeds would be distributed and invested in many ways, including the $82 million debt VEA took on to build the transmission system being retired and $10 million being set aside to distribute to active members who paid into the ownership of the lines between 1995 and 2016.

Other uses include putting $7.2 million toward retirement of capital credits, retirement of patronage capital, paying down additional debt and being used in future capital expenditures.

The sale would also allow the cooperative to roll back a 9.9 percent rate increase enacted in July 2016 and stabilize the rate to where another rate adjustment wouldn’t be made for at least 10 years.

The $10 million set aside for distribution to VEA member-owners will be given out in a one-time cash payment of $579 through the retirement of capital credits, which would be the largest in VEA history.

Aside from the benefits the members-owners will see, VEA will also be able to pay off debt, build equity, provide more rate stability and new investment capital and turning an expense of owning the transmission lines into a revenue source.

VEA would turn the expense of owning the lines into a revenue source by being brought in to maintain the transmission lines by the new owners, which is how the co-op will profit on an expense.

Also, the new owners will be subject to regulatory approvals set by the Federal Energy Regulatory Commission, which will protect VEA consumers from sudden rate adjustments, according to the co-op.

“Having built the transmission system, VEA owner-members can now sit back and watch the fruits of their labor work for them in the form of fewer risks and lower rates,” Husted said.

The lines were created to serve members in the rural portion of the state, which encompasses 6,800 square miles of service area that were affected by brownouts and blackouts in 2007, caused by damage to existing power lines.

Having the two sets of lines allows the member-owners of VEA to have redundancy to avoid a repeat of the 2007 incident.

Considering the area as an “island utility,” VEA has been forced to bear its own infrastructure costs since its inception over 50 years ago, which is unlike the majority of the country.

No job cuts will occur at VEA as a result of the pending sale, according to Husted.

The sale would also put into motion a community-focused project that VEA has been considering for the better part of the last year.

“There would be a $5 million donation from the buyers to the Valley Electric Charitable Foundation designated for a YMCA-type facility in Pahrump,” Husted said.

The value of the land that the proposed facility would be built on is also worth an estimated $5 million, VEA said.

If the sale is approved by VEA member-owners, Husted explained that would not change the plan that was put into place when building the system.

“The sale of those lines does not mean that our mission changes,” he said. “That mission was accomplished in 2013 when the second of the two lines was energized and it is not going away.

“Whether we own the lines or not, those lines will always be there to serve Valley Electric’s load and to give us reliability.”