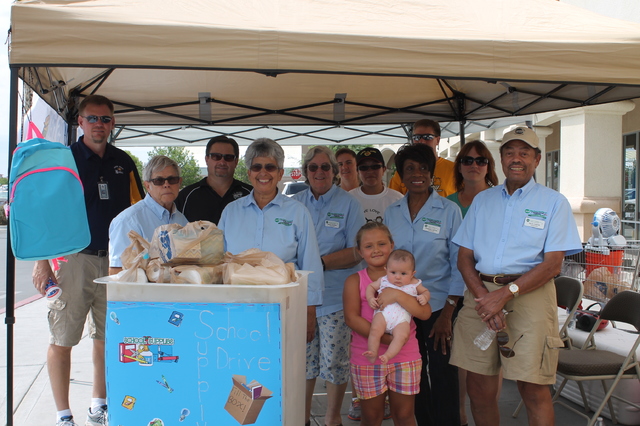 For the 11th consecutive year, the Valley Electric Association Ambassador Program will conduct its Fill the Bucket event on Saturday, Aug. 5, to gather school supplies for needy students within VEA’s service territory, the association announced.

Ambassadors and VEA staff will collect school supplies at from 9 a.m. to 1 p.m. at Smith’s, Walmart and Albertsons in Pahrump. Ambassadors will then distribute the supplies to schools within the VEA service territory.

Following is a list of supplies that school officials have identified as being most needed by students:

More than 37 buckets were filled during one of the hottest days of the summer in 2016, and Ambassadors hope to exceed that amount this year. Dozens of VEA ambassadors and staff will volunteer their Saturday collecting school supplies outside Walmart, Albertsons and Smith’s.

The annual event, which began in 2007, has its roots in the Seven Cooperative Principles, several of which focus on education and concern for community, says Frank Bonesteel, chairman of the Ambassador Executive Committee. The program has been a favorite of VEA staff and ambassadors ever since.

Each year, members are excited to support the event by dropping supplies into the bucket as they exit the stores. Many shoppers also donate money, which is then used by the volunteers to purchase the needed supplies.

In order to get the supplies to schools as soon as possible, dozens of VEA ambassadors will gather on Monday, Aug. 7, to organize the supplies that are collected and package them in boxes for delivery.

VEA’s Ambassador Program, 650 members strong, has been in existence for approximately 10 years. Ambassadors seek to be well informed and educated on the day-to-day operations of VEA, as well as its future.

These members want to make a difference in their community and support VEA by participating on committees, attending meetings and joining VEA staff at functions, organizers said. They provide feedback on VEA initiatives, programs and activities. They talk to their neighbors and share information.