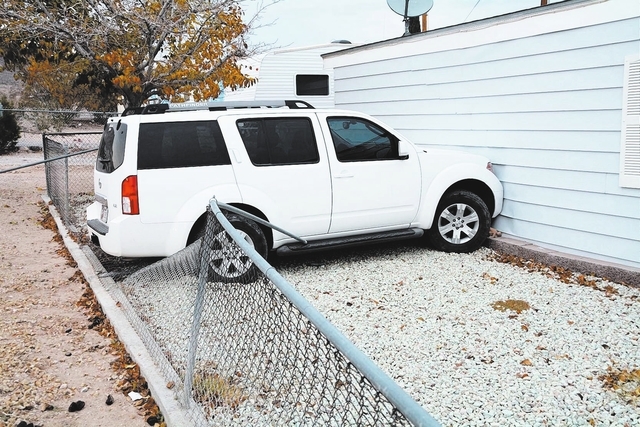 BEATTY — Bobby and Chris Nichols were using computers in the front room of their house at 500 N. Irving in Beatty Monday afternoon when they heard a loud crunch.

“I thought someone had hit my camp trailer out back,” said Bobby Nichols, “and I walked out the door, and there it was.”

The “it” was a white SUV that had crashed through their chain link fence and hit the side of their house.

The vehicle was driven by a 16-year-old male juvenile, who was obviously shaken by what he had done. He said he remembered thinking he was turning at the corner some 50-75 feet further back, and the next thing he knew he had hit the house.

It was unclear whether he had blacked out or perhaps been distracted. Two other male juvenile passengers in the vehicle were evidently frightened and fled the scene before deputies arrived.

“I felt sorry for the poor kid,” Bobby Nichols said, remembering how he felt when he had his first accident as a youth.

“They are nice people,” he said, referring to the driver and his mother.

Bobby Nichols was not sure of what damage might have been done to the interior of the home. The point of impact was in the back of a large closet, and items stored in the closet had jammed the door so that he could not get it open.