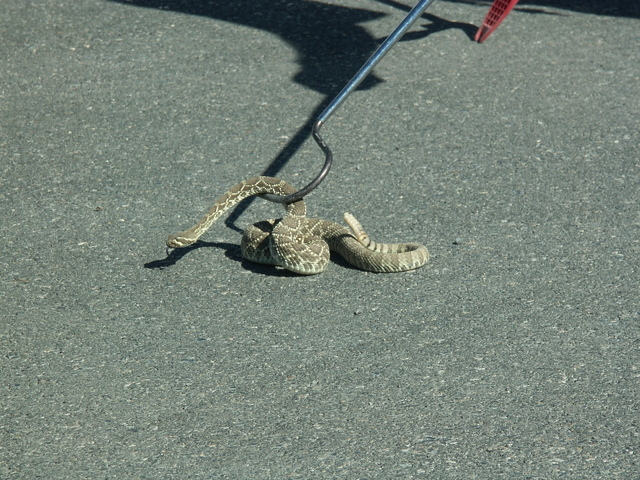 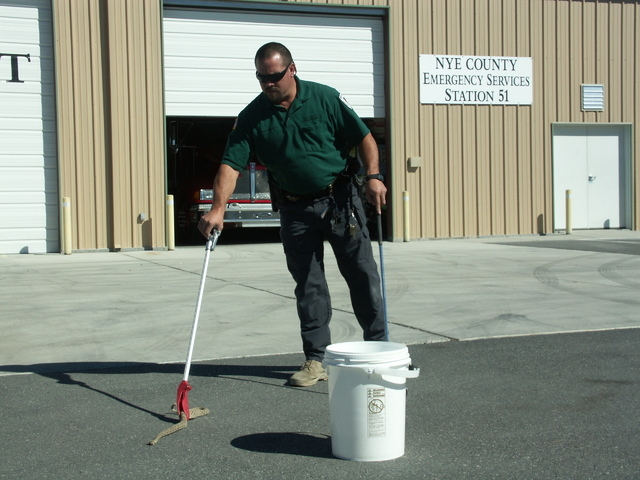 Officials with Nye County Emergency Services offered some advice on what not to do if someone encounters a snake while walking down a dark street in the wee hours of the morning.

The advice, however, was a little too late for a local man who found himself in similar circumstances late last month.

The man, who was walking along Simkins Road just past 3 a.m., chose to pick up the snake and was subsequently bit twice.

Nye County Emergency Services Director Vance Payne said the man was bitten by a venomous snake known as the Mojave Green, the most deadly variety of the rattlesnake species in Pahrump.

Officials also say they’ve had more reports of venomous snake sightings in Pahrump this summer than in recent memory.

“It seems like there has been more interaction in populated areas than we’ve seen in quite a while,” Payne said. “We’ve been having at least one or two a week and sometimes more than that. These were not bites, but sightings. The desert, obviously is all around us, so there has been a lot of interaction between the public and snakes this year in Pahrump.”

Payne also said for the most part, snakes tend to avoid contact with humans, unless the human initiates the contact, which is never a good idea according to Payne.

“To my knowledge, there are not a lot of snake experts here in town, so it’s best to assume that they are venomous. If you give them plenty of berth, they will normally just move away. If they are near your pets or children, call animal control and we’ll respond as quickly as possible. Many times, they are gone by the time we get there.”

The man who was bitten, according to Pahrump Valley Fire and Rescue Services Chief Scott Lewis, was flown to Las Vegas for treatment.

Lewis noted that for reasons unknown, the man waited before he contacted medical crews.

“He was on foot and walked to his house,” Lewis said. “He didn’t call 911 for approximately one hour after he sustained the bites.”

“Our hospital tries to maintain at least eight units of antivenom at any given time. It generally takes six to eight units to properly treat someone. If more than one person was struck by a venomous snake, they can initiate treatment, and then get them moved toward sources in Las Vegas.”

Gregory said Nevada is home to five snake species that can be dangerous to people and pets, including the Mojave Green, which he said is the most poisonous in the region.

The Western Diamondback, the Speckled Rattlesnake and the Sidewinder are also classified as poisonous.

Gregory also said some of the less aggressive varieties are normally caught and released deep in the desert.

Others will eventually meet their demise once they are caught.

“The calmer snakes, I’ll take five or ten miles outside the community and release them. They are all over the valley, but this year we have seen more Mojaves. Last year, we saw a lot of Sidewinders in the area.”

Additionally, Gregory said there are at least two lizard species that also pose a hazard to people and pets.

“We are supposed to have the Gila monster and the Beaded lizard here. They look very similar and are more common in Arizona. I’ve never seen one here, but they can get here.”

Gregory also said the best way to avoid a bite is to be aware of surroundings and avoid any contact.

If a venomous reptile is seen in an area where it poses a direct threat to human safety, residents are urged to call Nye County Animal Control at (775) 751-6315.