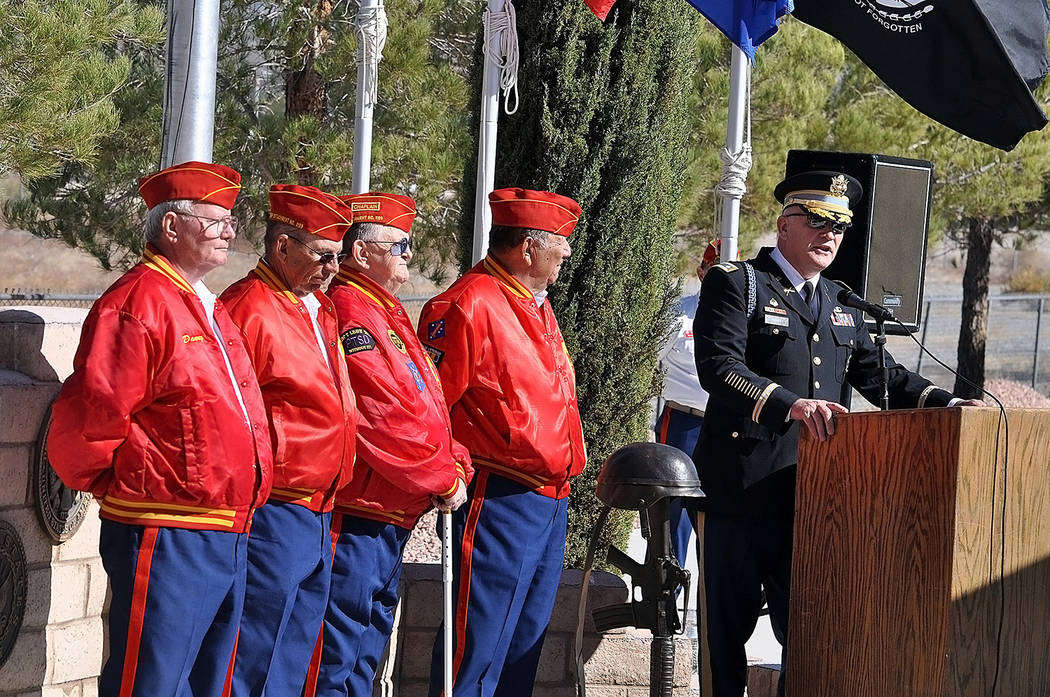 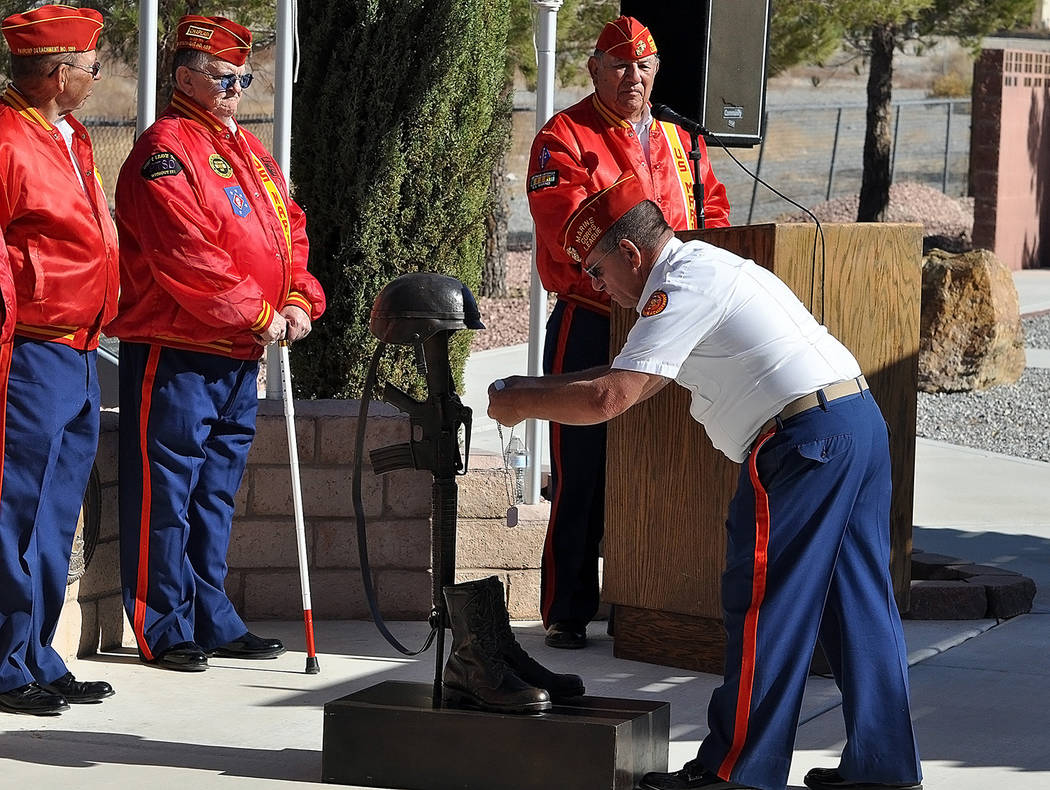 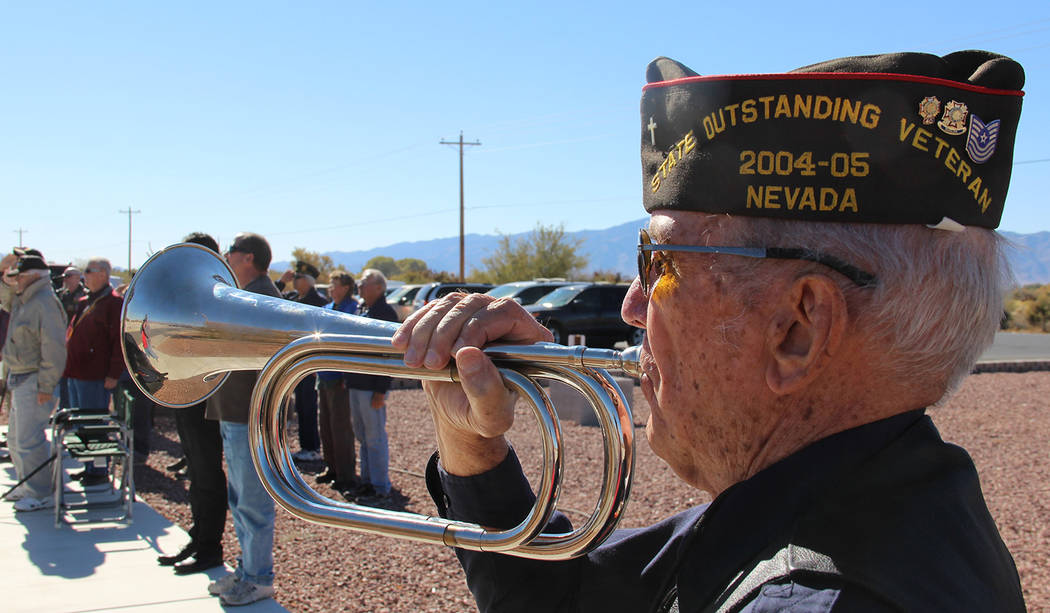 Charles Hoover/Special to the Pahrump Valley Times A local veteran blows TAPS during Sunday’s Veterans Day ceremony at VFW Post #10054 on Homestead Road. The site was one of several venues where Veterans Day services were held in the valley. 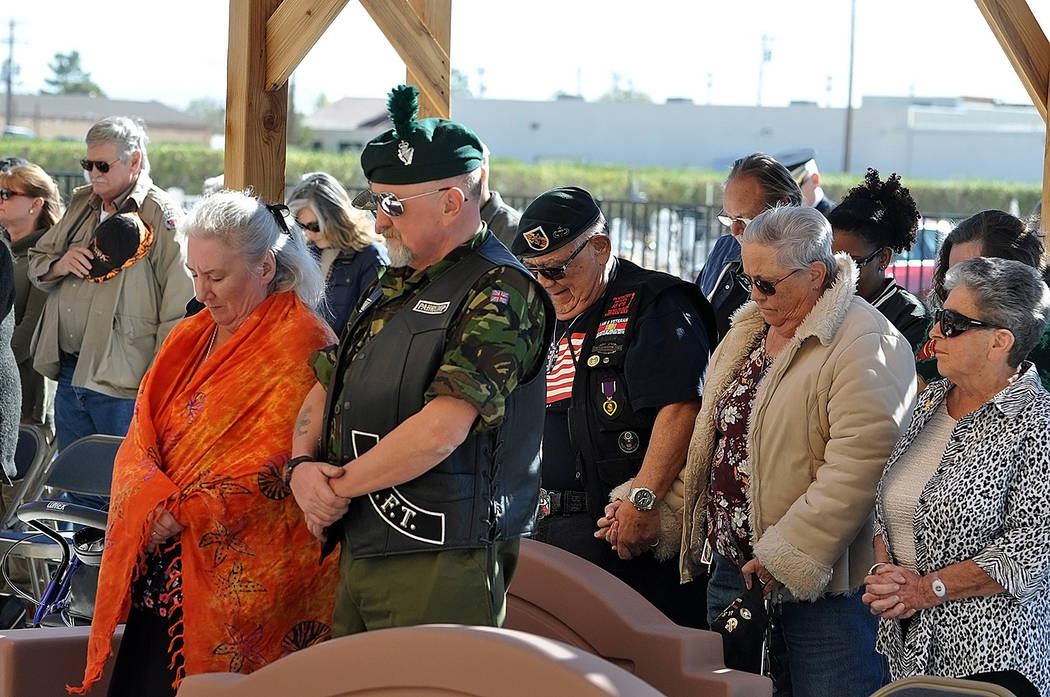 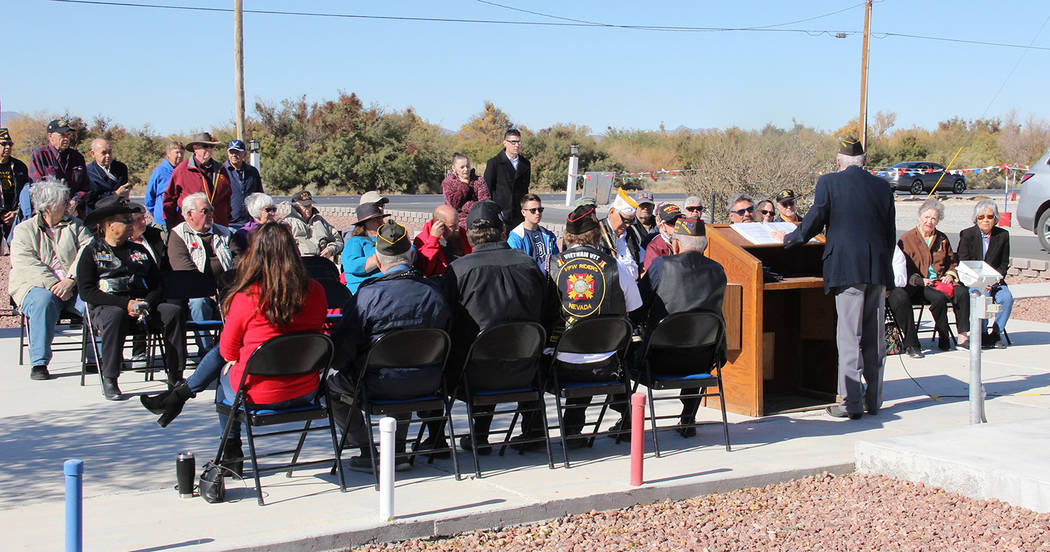 There was no shortage of services honoring area veterans during the past week as businesses, veteran organizations and Pahrump Valley High School’s music department paid tribute to current and former members of the United States military.

On Sunday, Nov. 11, members of the Pahrump Marine Corps League Detachment 1199, hosted their annual Veterans Day observance at the Pahrump Veterans Memorial located on the grounds of Chief Tecopa Cemetery.

Originally termed “Armistice Day,” each year, Nov. 11 marks the anniversary of the end of World War I, where major hostilities of the conflict were formally ended at the 11th hour of the 11th day of the 11th month of 1918, when the armistice with Germany went into effect, according to local Marine Corps combat veteran Jose Telles, who also served as the master of ceremonies during the observance.

“At the urging of major U.S. veteran organizations, Armistice Day was renamed Veterans Day in 1954,” Telles noted. “Today is the 100-year anniversary of the end of World War I. It is a day to honor those who have served and are now serving in uniform, as well as those who died in service to this great country. Military service joins us together like no other bond. The camaraderie we share in military service helps to define us. I can honestly say the time I’ve spent as a member of the United States Marine Corps was the best time of my life.”

Nye County Commission Chairman John Koenig spoke of the sacrifices service members and their families make throughout their career.

“The places where you live and serve, the risks you face, the people you deal with every day; all of these are usually decided by someone else,” Koenig remarked. “For the time you spend in uniform, the interest of the nation must always come first, and those duties are shared by family members who also make many sacrifices of their own by facing separation during deployments and sometimes bear extreme and permanent losses. My wife’s father was a 30-year Navy vet, so she can relate.”

“We had about 50 people come out on Sunday, which was nice, considering it was a bit windy and chilly,” Darrell said. “It was a somber occasion and it was also wonderful to see everybody out there to watch the flags be retired. It was a really nice ceremony to see the old flags removed from the flagpole and the new ones put up, including the POW and the MIA flag. We observe Veterans Day every year. On Monday we had a flag retirement ceremony where the flags are retired by burning them during a special ceremony. The local Boy Scouts played a big role in the flag retirement ceremony.”

Members from the school’s JROTC program were also part of the hour-plus concert, which closed with a ‘Goodnight Saigon’ all-ensemble performance.

Just across town at the Albertsons Plaza, the owners of G.I. USA, George and Cindi Vroenen, hosted their 5th annual Veterans Day observance.

“The turnout was wonderful,” Cindi Vroenen said. “Col. Patrick Nary came up to cook, and we served about 200 people. Of course, we had all of the giveaways, which was wonderful. We also had members from Nye County Search and Rescue and the Quilts of Valor group here on Saturday.”

Vroenen also spoke about a special Christmas card drive for the thousands of U.S. troops stationed, at present, in the Middle East.

“It was from the Project Pahrump Cares Organization,” she said. “We must have collected two or three hundred Christmas cards that will be shipped out to service personnel in Afghanistan. We have several thousand American troops stationed there right now.”