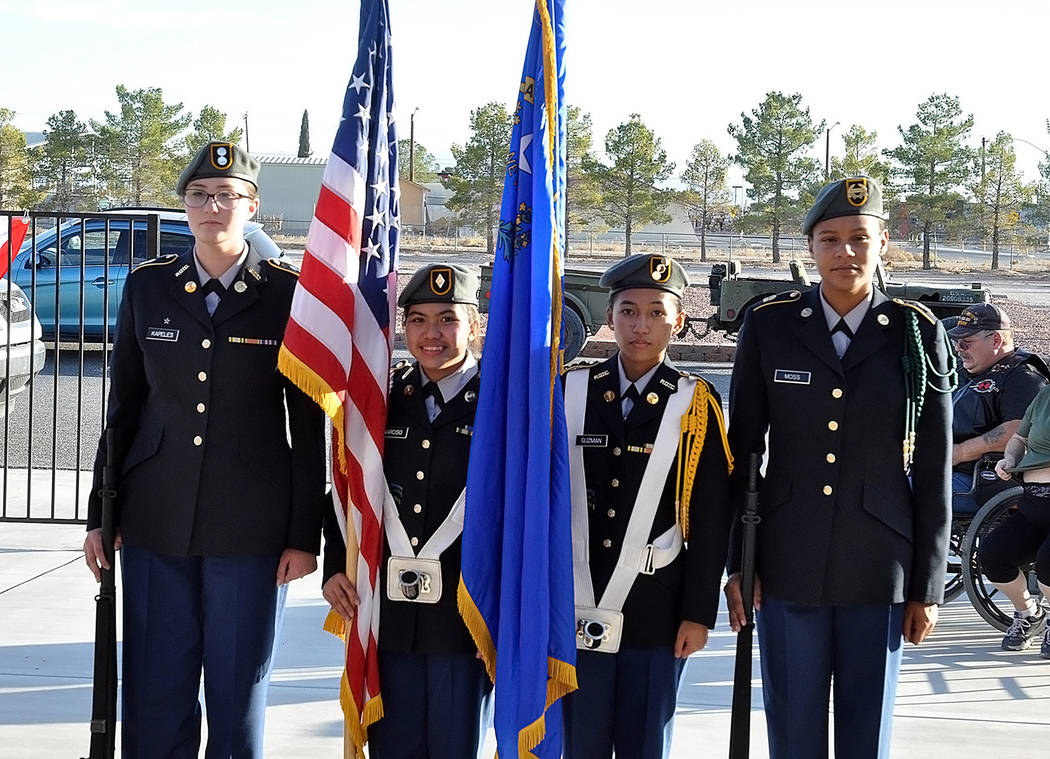 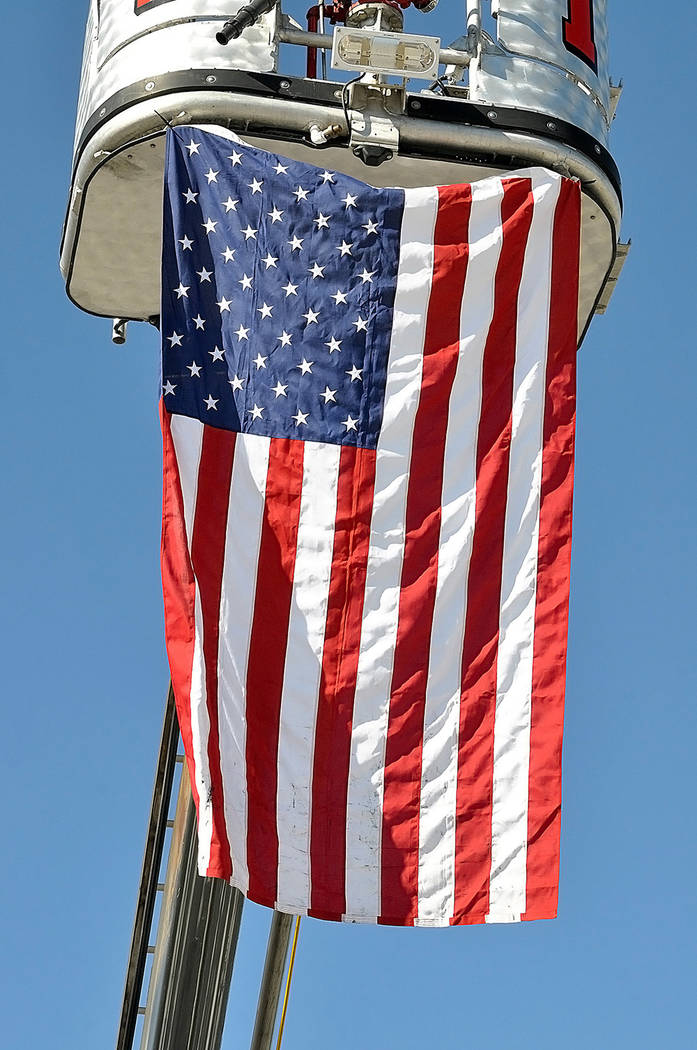 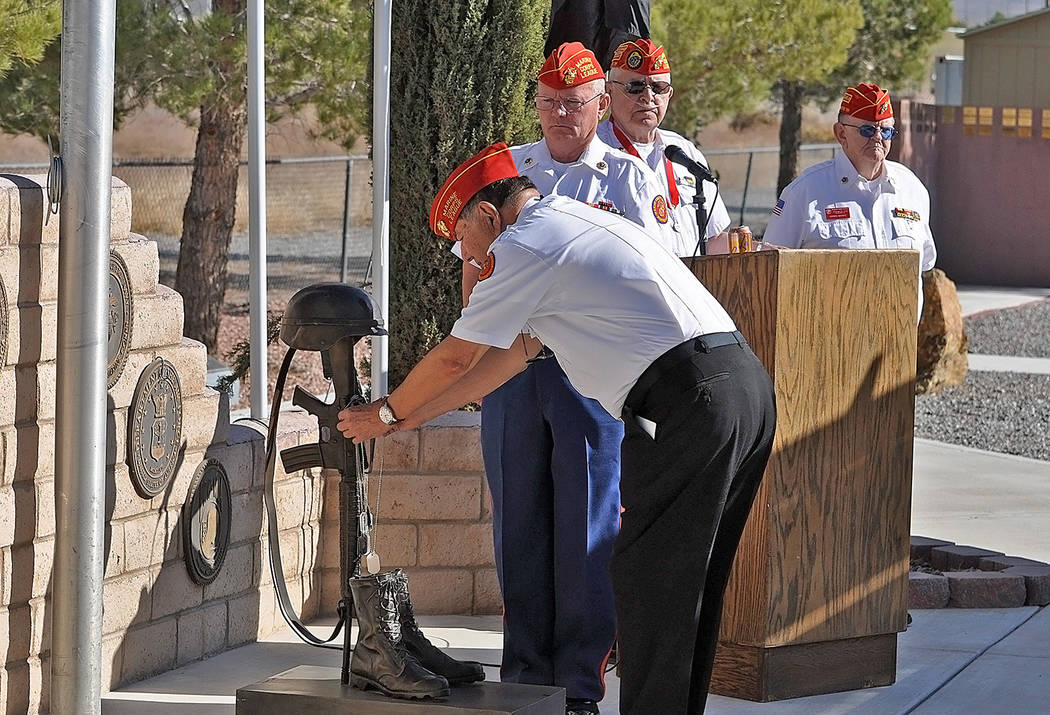 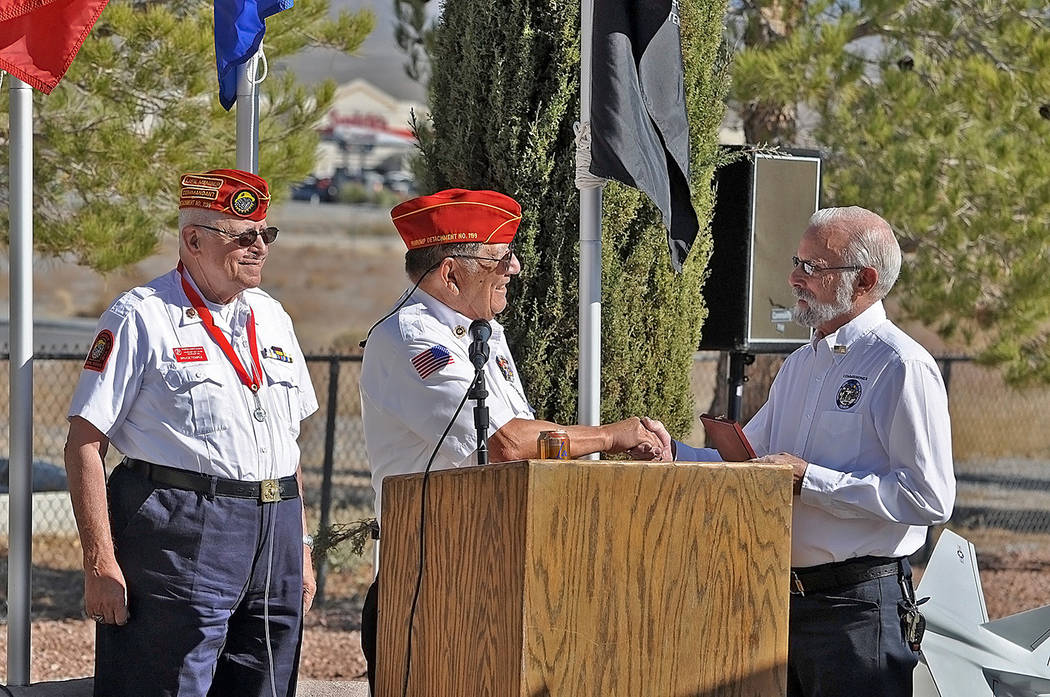 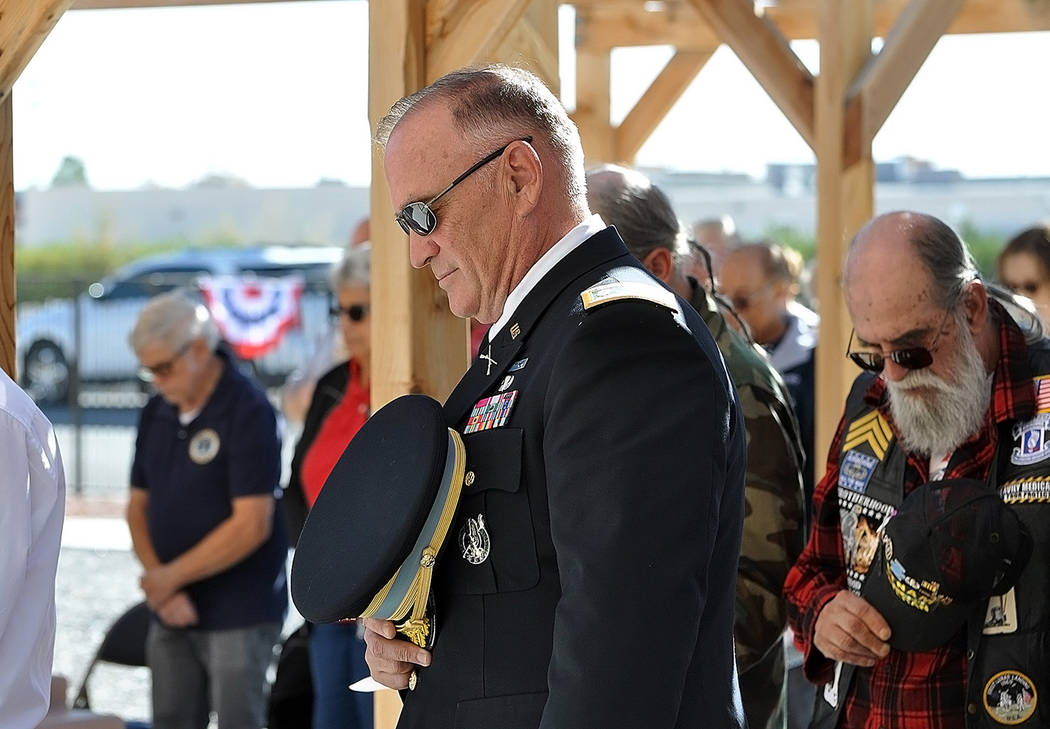 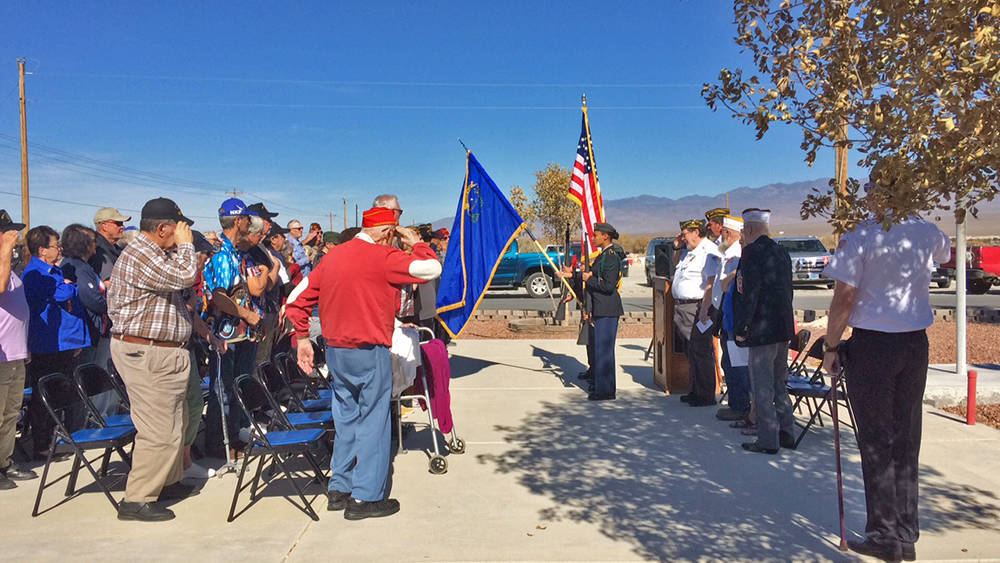 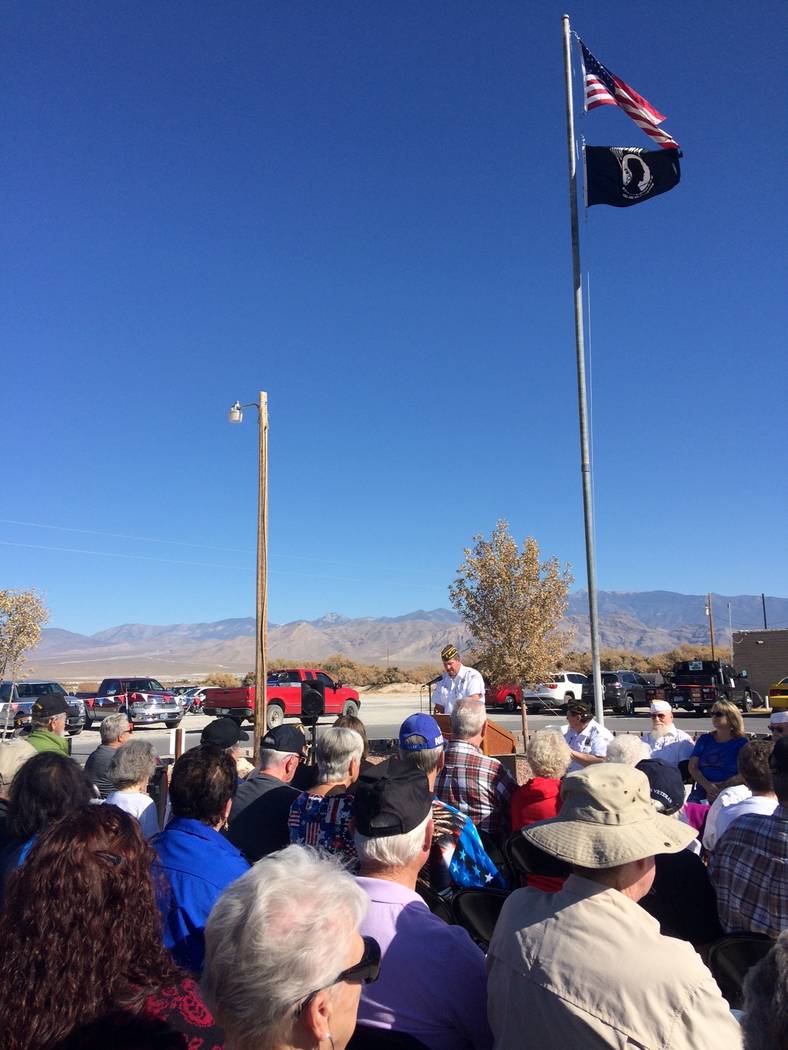 Robin Hebrock/Pahrump Valley Times The American flag and POW/MIA flag fly over the audience at the VFW Veterans Day ceremony. 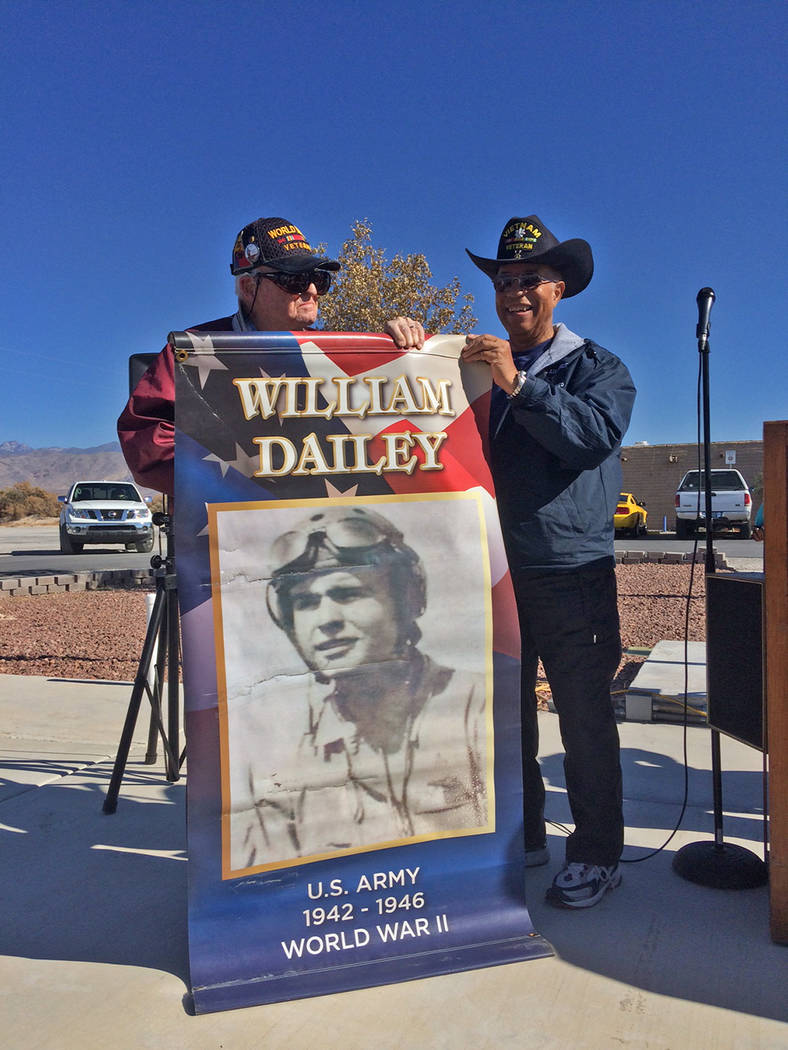 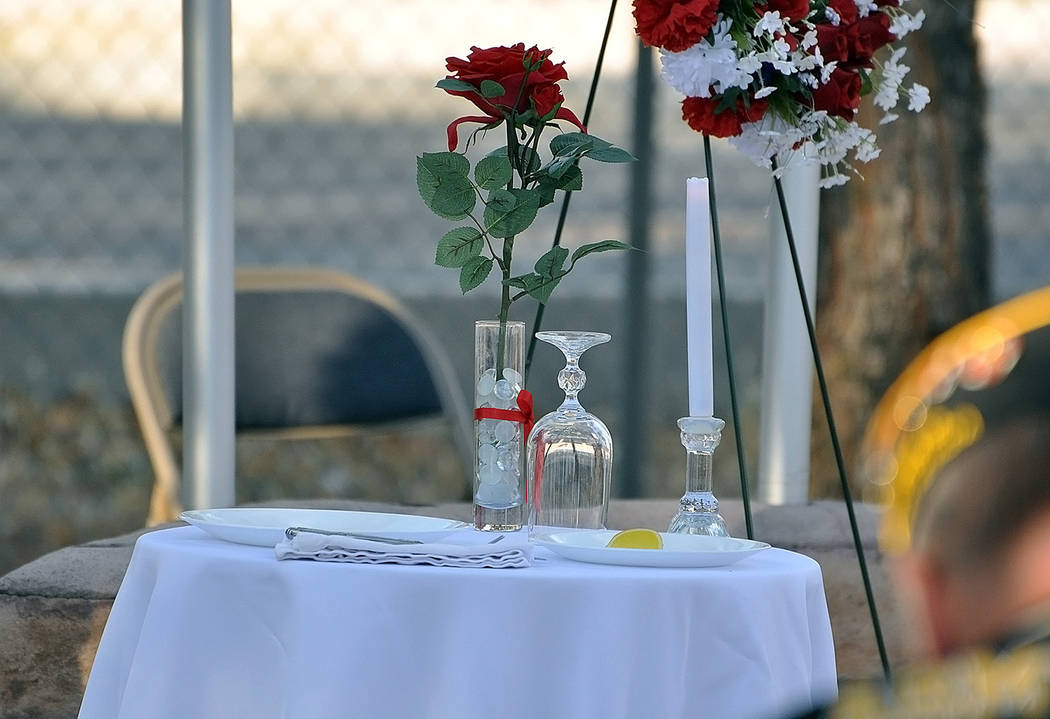 Horace Langford Jr./Pahrump Valley Times The solitary table, complete with lemon, salt and candle, provides a symbolic setting in honor of all Prisoners of War and Missing in Action during the DAV's sundown ceremony on Veterans Day. 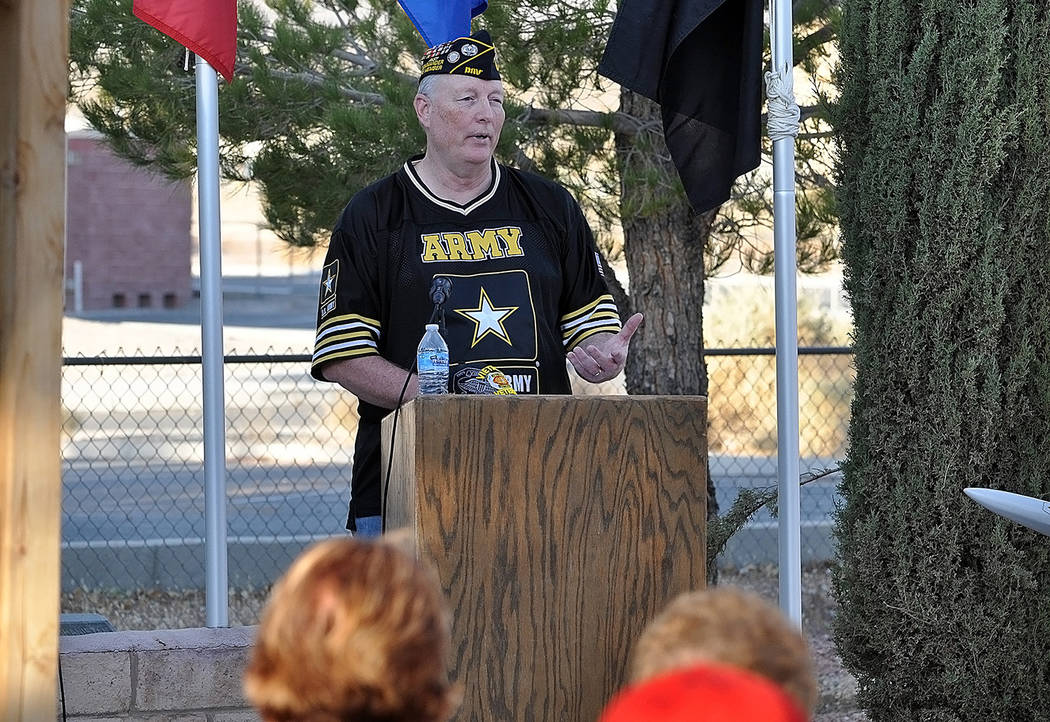 Horace Langford Jr./Pahrump Valley Times - Veteran Bruce Cox of the DAV Chapter #15 and local VA clinic was one of the three veteran speakers who took part in the DAV's Veterans Day ceremony.

Veterans Day is always quite a special occasion in the Pahrump Valley, where the population is well known for supporting its troops and former service members.

This year’s observance proved no different, with several events taking place across town to mark the day.

Three of the valley’s veterans organizations, the Marine Corps League Detachment #1199, the Veterans of Foreign Wars Post #10054 and the Disabled American Veterans Chapter #15, each conducted ceremonies in honor of the holiday and the community turned out by the dozens for all three.

The first ceremony took place at 10 a.m. on Monday, Nov. 11 when the Marine Corps League kicked off its event with the slow tolling tones of a bell ringing through the morning air. Welcoming the crowd to the event was Marine Corps League Commandant Bruce Temple, followed by the Marine Corps Color Guard posting the colors while the audience together recited the Pledge of Allegiance.

The opening prayer was given, after which the “Star-Spangled Banner” was performed, intensifying the patriotic atmosphere already so strong throughout the venue of the Chief Tecopa Cemetery Veterans Memorial.

The Marine Corps League Honor Guard then proceeded with a rifle salute, emitting a volley of shots into the air. The somber sound of “Taps” rang out next, followed the traditional I.D. Tag ceremony, with a set of the tags solemnly placed upon a statue depicting the rifle, boots and helmet of a soldier in representation of each branch of the military, the Army, Navy, Marines, Air Force and Coast Guard, as well all prisoners of war and those missing in action. A few words from two invited guest speakers were included in the event as well, with Lt. Col. Patrick Nary and Nye County Commission Chairman John Koenig speaking.

“Thank you for the honor and privilege of speaking today, to recognize those who have fought for the freedoms we enjoy, many of whom never got the chance to enjoy because they died in battle thousands of miles away from their homes,” Nary, who served for 26 years in the Army, told the crowd.

Koenig, who is not a veteran himself but has a history of supporting veterans’ causes, spoke next. “The service members we honor today came from all walks of life. They shared several fundamental qualities. They possessed courage, pride, determination, selflessness, dedication to duty and integrity, all qualities needed to serve a cause larger than one’s self.”

Just before the ceremony came to a close, Marine Corps member Jose Telles had a surprise for Commissioner Koenig, who was presented with a pocket knife and lighter in thanks for the work he has done as a commissioner to aid veterans in the community.

At the 11th hour of the 11th day of the 11th month, the VFW ceremony took place at the VFW post. The Pahrump Valley High School JROTC started the ceremony with the posting of the colors for the recital of the Pledge of Allegiance. The opening prayer then followed by post commander Marty Aguiar, who welcomed the crowd, thanking all for attending.

“It is on this day when we honor the contributions and sacrifices of more than 19.5 million veterans and service members who have proudly served our country and all those who paid the ultimate sacrifice in the name of liberty and justice,” Aguiar said. “Every generation of Americans undoubtedly owes a debt of gratitude to these brave patriots and we must do everything we can to make sure men and women who serve in today’s and tomorrow’s military receive what they need to accomplish their missions of safeguarding America’s interests.”

Aguiar then turned the microphone over to the day’s speakers, which included post Auxiliary President Bonnie Darrell, post Senior Vice Commander Max Schmidtt and post Junior Vice Commander Peter Christian, before bringing the ceremony to a close and inviting attendees inside for socialization and refreshments.

The DAV’s ceremony began at 3:30 p.m. at the Chief Tecopa Cemetery Veterans Memorial with a welcome from commander Greg Cardarelli, who announced that evening that this would be the last year that he would be acting as commander of the organization. Again the opening prayer started the Veterans Day event and the Pahrump Valley High School JROTC was once again on hand to present the colors for the Pledge of Allegiance and the playing of the national anthem.

Guest speakers for the evening included three local veterans, VFW commander Aguiar, DAV member and VA Clinic worker Bruce Cox and Lt. Col. Dr. Tom Waters, U.S. Air Force-retired. Each spoke about their experience as a member of the U.S. armed forces and detailed why they are proud to be veterans.

“The best thing about being a veteran is being here with all of you guys… it doesn’t get any better than that,” Cox told the audience.

“While today, Veterans Day, is a day to honor and celebrate our veterans, we need to emphasize… that this is not a day of mourning. This is a day of celebration and honor,” Waters stated, later adding, “I am extremely proud to stand with all veterans today. God bless you all for being here today, God bless our veterans and God bless these United States of America.”

A medley of the songs of each military branch was then played, with members of those branches standing when they heard their song ring out before DAV Chaplain brought the ceremony to a conclusion with the benediction.