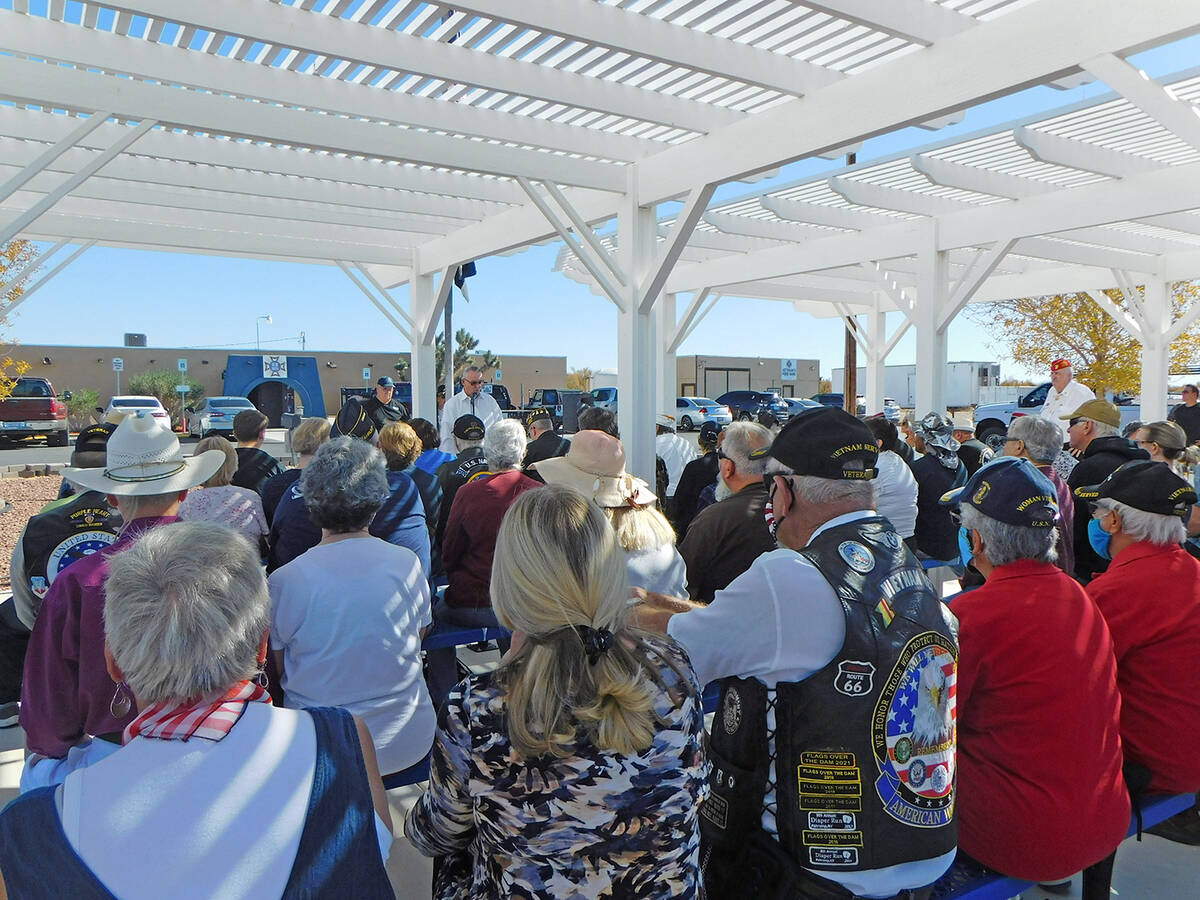 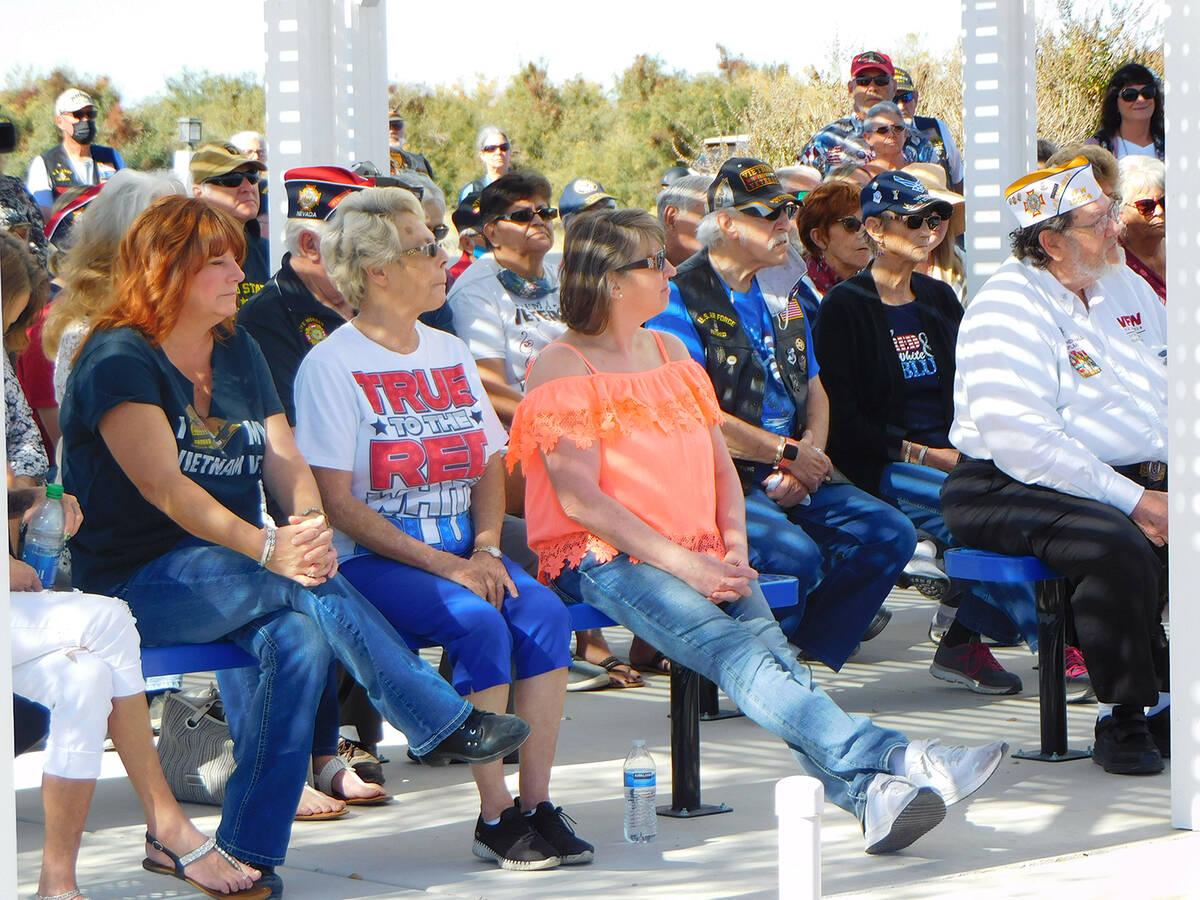 Robin Hebrock/Pahrump Valley Times There were several dozens attendees at the VFW Veterans Day Ceremony on Nov. 11, all out to honor the men and women who have served America in its armed forces. 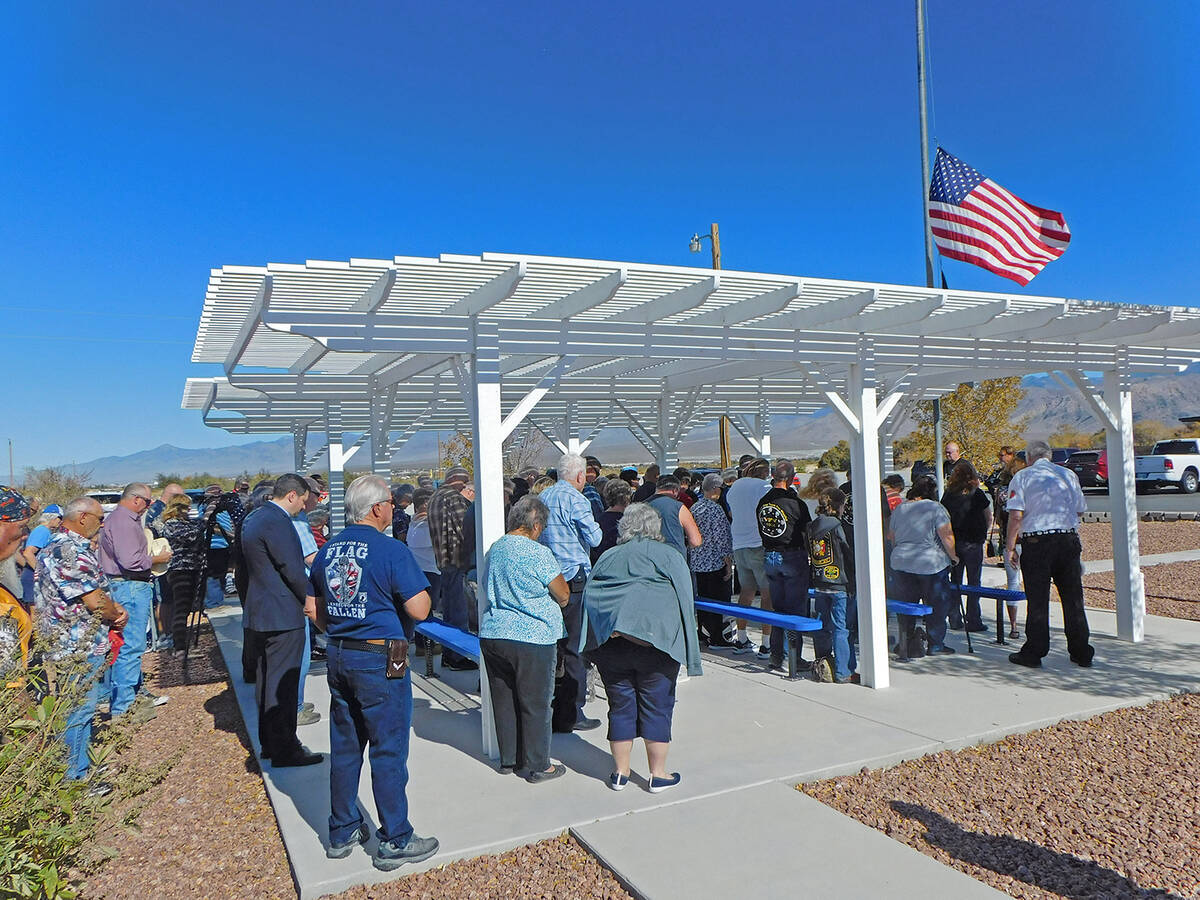 Robin Hebrock/Pahrump Valley Times With the flag waving in the slight breeze, VFW Veterans Day Ceremony attendees are pictured saluting as they recited the Pledge of Allegiance.

In honor of Veterans Day, at the 11th hour of the 11th day of the 11th month, members of the Veterans of Foreign Wars Post 10054 gathered to host their annual ceremony. Joining members were several dozen residents and fellow former military service members, all intent on commemorating the holiday, which is one that is taken for granted by many, but one the residents of the Pahrump Valley regularly celebrate with all due solemnity and appreciation.

VFW Sr. Vice Commander Steven Kennard, who was acting as post commander for the ceremony, welcomed the crowd that had assembled amid the mild late-morning weather before asking all to rise and salute the flag for the Pledge of Allegiance.

Post Chaplain Stephen Hall then took to the microphone for the invocation, asking God to bestow his blessings upon all those who have fought in the name of country, and all those friends and loved ones who support those who serve.

“We thank you for this opportunity to share with them this special occasion to honor our veterans. Let us also always honor the memory of those brave men and women of the Army, Navy, Air Force, Marines and Coast Guard, who sacrificed so much that we may experience freedom in a country that is free,” Hall intoned. “Let us be reminded of life, liberty, justice, freedom and democracy, that we may be ever grateful to you for those veterans who gave so much for their country.”

Kennard returned to the podium to give his formal speech, taking over for post commander Marty Aguiar who could not be an attendance that morning.

“It is truly an honor to join with you today as we recognize all of America’s veterans, all the soldiers, sailors, airmen, marines and coast guardsmen who have selflessly gone wherever they were called on to serve,” Kennard said. “This year, Veterans Day has extra meaning, as 103 years ago, on the 11th hour of the 11th day of the 11th month, in 1918, the Great War, the war to end all wars, finally ended.”

Kennard went on to explain a bit of the history that surrounds Veterans Day, a holiday created to celebrate the armistice that ended World War I. As Kennard reflected, even now, a full 100 years later as community members come together to remember those who fought to preserve the freedoms that all Americans enjoy today, there are thousands of men and women in active duty continuing that mission.

“Like generations of patriots who came before them, these few shoulder the burden for many. They serve because they know it is necessary for the greater good. Now, more than ever, it is important that we take time to thank the men and women who selflessly sacrificed to serve in our armed forces,” Kennard said. “It is because of their dedication and sacrifice that we celebrate Veterans Day, to recognize and honor all those who have placed country above self, who have determined the safety and security of others as more important than their own, and who have done their duty by taking their place in line, just as generations of military men and women have done before them.”

Kennard went on to note that every generation of Americans owes a debt of gratitude to the patriots who donned a U.S. armed forces uniform and took the mantle of responsibility for protecting the freedoms and liberties of their friends, family and neighbors. Without those willing to put their own lives on the line to uphold the American way of life, tyrants and evil will prevail, Kennard declared.

“If we could make any demand, I would demand my fellow citizens grant our keepers of peace and protectors of our freedoms, our veterans, the care and respect they so richly and rightfully deserve. Those of us who care to honor Americas heroes gather because we are honoring our sons and daughters, our mothers and fathers, our brothers, our sisters who are serving on behalf of everyone in our great country, just like generations of American patriots did before them,” Kennard said.

VFW Auxiliary President Bonnie Darrell also spoke that morning, offering a few words about the other side of military service, the family members who must watch their loved ones leave for an uncertain future and yet keep faith at home.

“The waging of war involves more than just combatants who fight to the death in the field of battle. The fighting forces begin at the fireside and in the hometowns,” Darrell told the crowd. “The repercussions of war’s terrible brutality have chilled the heart and dimmed the hopes and dreams of many a loved one left behind on the home front. While the horrors of the battlefield may not have been our experience, we have lived with the terrifying loneliness created to answer an aggressor’s challenge and this continues even as I speak.

“In waging war, we have moved forward with a unity of purpose, which made us strong, forgetting pettiness, egotism and pride,” she continued. “Our hearts beat in tune with those of other nations fighting for freedom and the dignity and opportunity of mankind. In our constant quest for an honorable world peace, there is need for unity and purpose if we are truly to move forward to a brighter tomorrow.”

VFW Jr. Vice Commander Peter Christen, who stepped in as acting Sr. Vice Commander for the ceremony, was the final speaker of the day, starting off his remarks by stating, “If there be glory in war, it is the utmost incredible spirit which it engenders.”

The men and women of military service offer their lives, sacrifice their all with magnificent abandon, Christen declared, noting that heroism becomes contagious, but there is another face to warfare, that of greed and brutality.

“Too often it is these latter which persist in the peace which follows. Let us strive to see that the same spirit of self-sacrifice is cultivated in peace as has been exhibited in war,” Peters said. “It behooves us to rear new standards of success, to inspire youth in peace as youth was inspired in war.”

The VFW Veterans Day Ceremony then came to a close and attendees were invited to have hamburgers and hot dogs and to spend a few minutes mingling with each other and offering their thanks to those veterans who made their way out for the event.