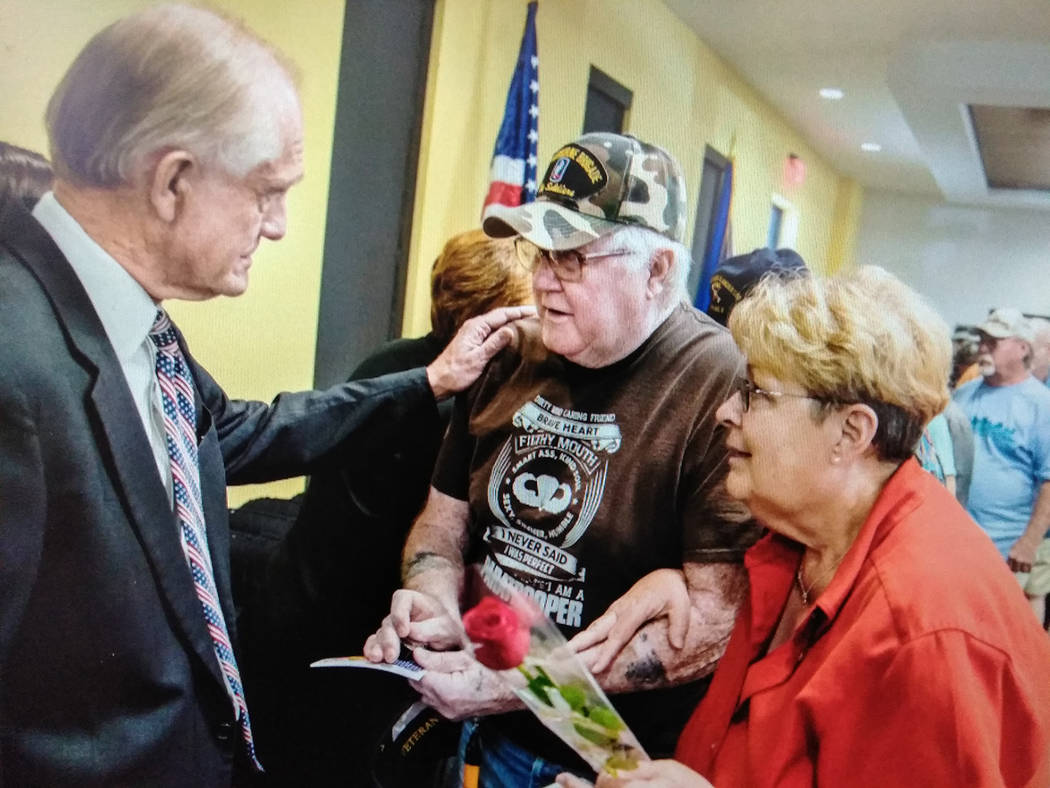 Jeff Scheid/Special to the Pahrump Valley Times Las Vegas PBS General Manager Tom Axtell, left, greets a Vietnam Veteran during the March 29, Welcome Home ceremony at Valley Electric Association's Conference Center. The occasion came exactly six years to the day when President Obama proclaimed March 29, as a day for all Americans to observe, with appropriate programs, ceremonies, and activities, the commemoration of the 50-year anniversary of the Vietnam War. 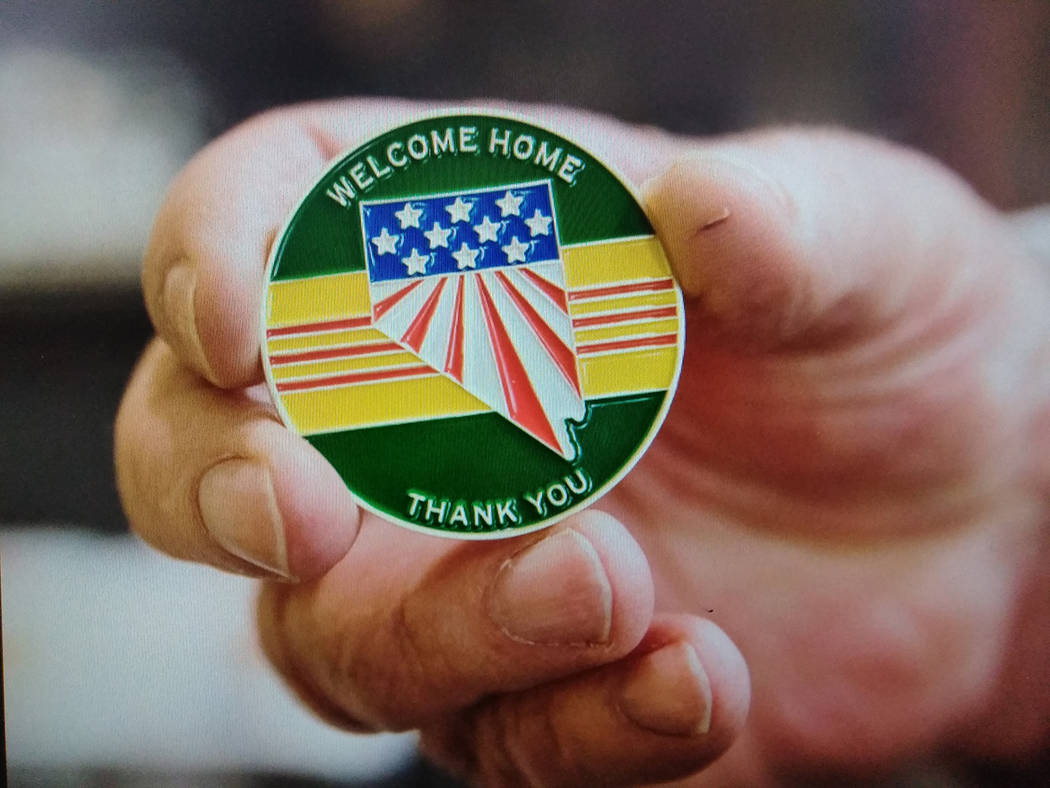 Jeff Scheid/Special to the Pahrump Valley Times Upwards of 170 Vietnam Veterans received an official "Welcome Home Coin and Vietnam Veteran cap at the ceremony. The hour-long event open to all veterans and their spouses, was hosted by Valley Electric Association, and held at the utility’s new conference center. 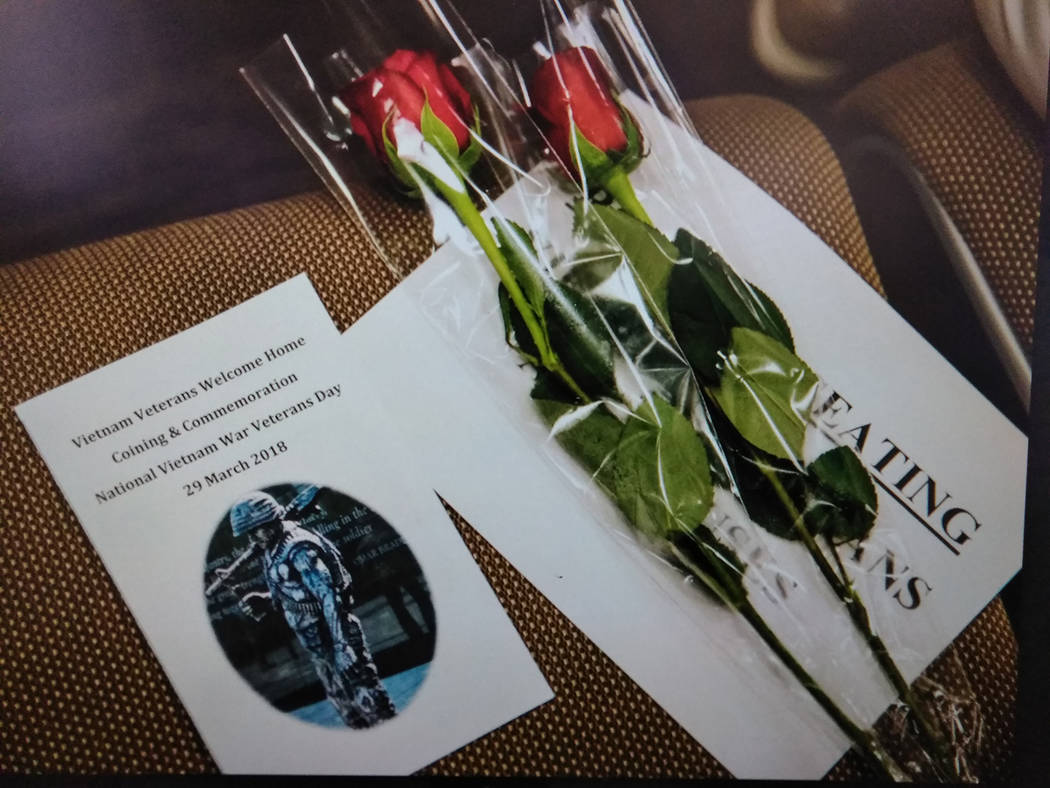 Jeff Scheid/Special to the Pahrump Valley Times Just feet from the conference center entrance, stood a small table set for one. The table stood as a symbol for the many veterans who were missing from the ceremony, while a red rose served as a reminder of familes and loved ones who "keep the faith," awaiting their return. 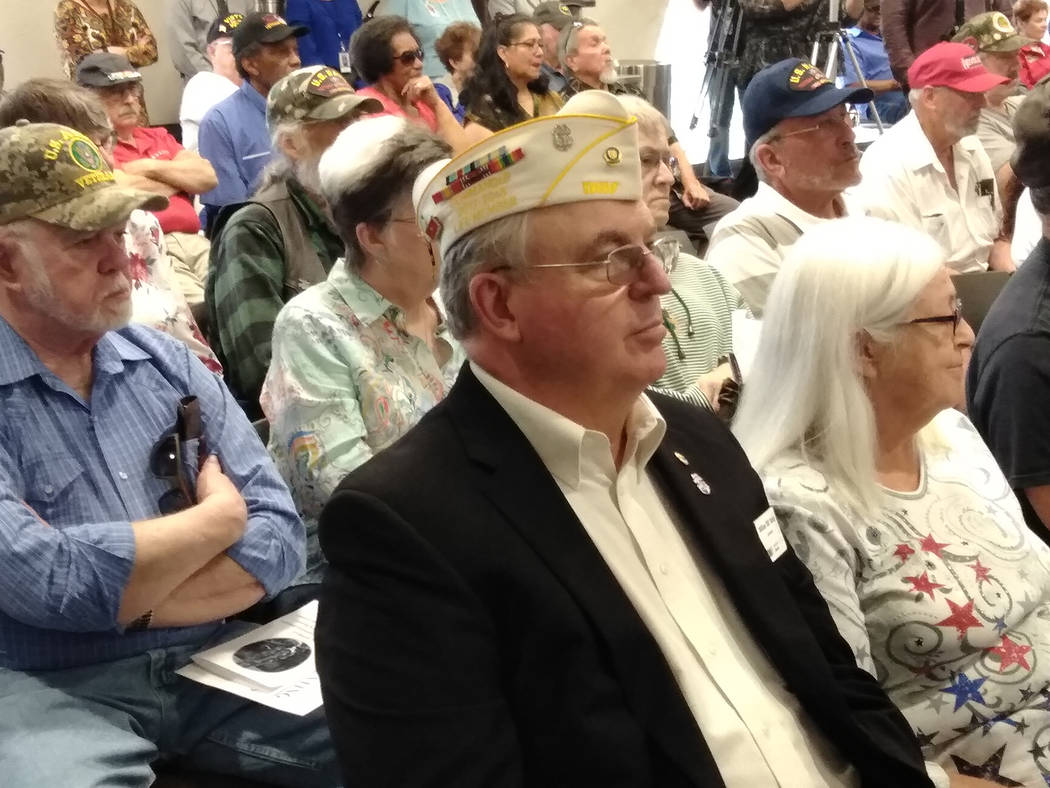 The hour-long event, open to all veterans and their spouses, was hosted by Valley Electric Association and held at the utility’s new conference center on March 29, where between 150 and 170 veterans in attendance were presented with a commemorative “Welcome Home” coin and veteran cap.

The occasion came exactly six years to the day when President Obama proclaimed March 29 as a day for all Americans to observe with appropriate programs, ceremonies, and activities, the commemoration of the Vietnam War.

Just feet from the conference center entrance stood a small table set for one.

That table stood as a symbol for the many veterans who were missing from the ceremony, while a white tablecloth symbolized the purity of a soldier’s intentions to respond to the “country’s call to arms.”

VEA Community Relations Representative Ryan Muccio said he was personally quite moved by the observance.

“Just watching all of the camaraderie and exchanges between all of the veterans who turned out made me very happy that they had the opportunity to get down, talk to each other and break bread with each other,” Muccio said. “It was a very beautiful afternoon and a very beautiful ceremony. I was quite moved by the event, and there was quite a few more people who turned out than I originally expected.”

An impressive lineup of guests attended the event.

The presentation and posting of colors were performed by the Marine Corps League Pahrump Detachment #1199.

“I am still waiting on the final numbers, but I can tell you that anywhere between 150 to 170 veterans were honored with the cap and commemoration coin,” Muccio said.

Just prior to the ceremony, all area veterans received valuable information during an hour-long veteran resource session.

“We invited any and all community partners and sponsors who offer services to veterans to our resource event,” Muccio noted. “They set up tables and offered information on what they had to provide for all of our veterans. That session was very well received and the veterans got a lot of great information. We were happy to be able to host that session as well.”

As there was no shortage of local veterans and spouses attending the ceremony, Muccio said VEA’s conference center was the ideal venue.

He noted that the event came about after VEA officials met with representatives from Las Vegas’ Public Broadcasting Service television station, KLVX Channel 10.

“We were touring their campus and we learned that they were looking for a venue in Pahrump to hold the service,” Muccio said. “Naturally, we offered our conference center, and it just became a natural fit. We just thought we would jump in and help sponsor it and put it on. The conference center, which was completely full, was actually built for community events such as that one.”

Issued in a news release, Valley Communications Association Manager of Marketing, Candace Perkins said the co-op was excited to partner with Vegas PBS, Kiwanis International, DAV, VETrans and VFW, in an effort to welcome all Vietnam veterans home.

In fact, Perkins noted that the observance had a particularly special meaning to her.

“My father is a Vietnam veteran, so I understand that those that served didn’t receive a proper welcome home,” she said. “This is an opportunity for our community to recognize their service, thank them and finally welcome them home.”

Pahrump Disabled American Veteran Chapter 15 Commander Greg Cardarelli, who is also a Vietnam veteran, believed the ceremony was necessary after 50-plus years.

“I heard about it through the Pahrump DAV Chapter 15 and I contacted the people organizing it,” he said. “I thought that it was important to do this.”

The ceremony’s Pledge of Allegiance was read by Juan Rangle, followed by the official invocation, given by Chaplain Dan Marks.

Additional sponsors of the event were the Veterans of Foreign Wars of the United States, VETrans and the Disabled American Veterans.