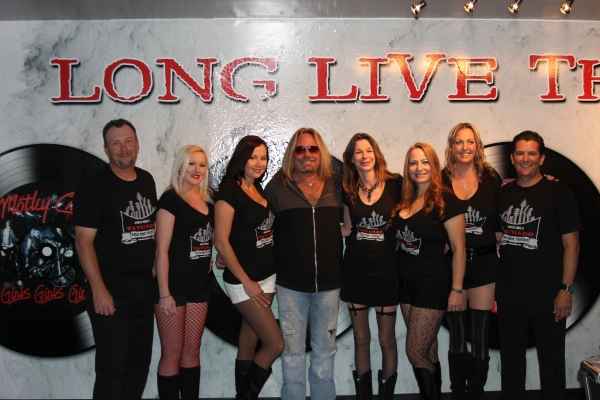 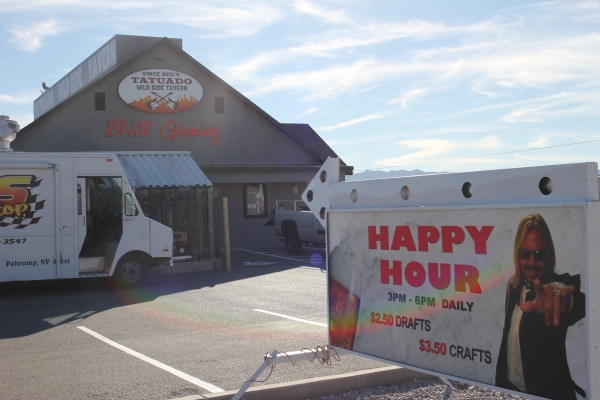 After experiencing a pair of delays pushing back the opening almost a month, Vince Neil’s Tatuado Wild Side Tavern is finally set to let Pahrump residents take a walk on the wild side.

Remodel issues and weather caused the delays, but with everything squared away, Neil stopped by the bar Tuesday afternoon to check out the bar that dons his name ahead of Friday’s grand opening.

Neil, taking a brief pitstop on his band, Motley Crue’s farewell tour, toured the facility full with Crue memorabilia and his face behind every seat and one on every table top.

When the idea about opening a place endorsed by him was approached by owner Michael Tsunis, Neil said he was excited about the plan.

“I thought it was great (to bring a bar to Pahrump,)” Neil said.

Despite not being too familiar with the area, Neil explained he knows some people who reside in the valley.

“I’ve actually never really been here,” he said. “The closest I’ve been is the motorcycle bar up in Mountain Springs. Today is the first day I have ever been to Pahrump, but it’s funny because I actually have a lot of friends that are from here.

“There’s one girl who is my girlfriend’s best friend, whose family still lives here and she said, “yeah, the bar could do good here, the people here are ready for something new, something fun.”

With a Tatuado-branded bar in Las Vegas at the Circus Circus Hotel and Casino, Neil expects the Pahrump location to be a scaled-down version of the one on the Las Vegas Strip.

“It’s different but it’s the same,” Neil said. “It’s the same concept, coming in here to have some drinks and listen to rock n’ roll, that’s really what it’s all about. The other one is just a little bigger with a little more to it, but this place doesn’t need that.

“We have four bars in there, this place doesn’t need four bars.”

Neil explained that he enjoys the smaller feel to the bar, as it allows employees to focus on their work and most importantly, the customers.

The almost 4,000-square-foot Wild Side features 15 beers on tap, four pool tables, two dart boards, a food truck and an indoor stage for smaller acts to perform. Patrons will also be able to buy merchandise, including T-shirts and Tatuado-branded packaged liquor to allow customers to take home a little Wild Side with them.

The 250-gallon fish tank featuring the shark named “Mr. Neil” is not installed yet, but plans still call for the tank to be installed in the near future. The other animal-themed attraction at the bar will be ready for opening night, as a gigantic imitation snake, which was brought in from Dr. Feelgoods in Miami Beach, Florida will slither on the back wall of the building.

With having his likeness plastered all over the place, Tsunis was in close contact with Neil to make sure everything involving himself was to his liking.

“I approved everything,” he said. “Michael (Tsunis) sent me the floor layout, I approved that, pictures of what’s going where, what the walls and seats would look like. He was really good about keeping me involved.

Neil explained that he hopes that the bar becomes a regular tour stop on many bands’ list, and said he will play the rear festival area in the summer once the area is complete.

“We’ll put a stage back there and do a summer concert festival and of course I’ll play,” he said. “Make it like a regular stop on the rock n’ roll touring schedule.”

Neil is confident that the bar could host bigger-name rock n’ roll bands, as one of his friends opened a similar bar in Sioux Falls, South Dakota, which has seen success.

“There is nothing in Sioux Falls, but he opened up this great rock n’ roll place and he’s got bands like Ratt and Quiet Riot, I mean tons of the 80s bands and it’s booked up for the next four months.

“So it’s become a stop where rock n’ roll bands will stop and we’ll do the same thing for Pahrump.”

Friday’s grand opening celebration begins at 4 p.m. with DJ’s from the Las Vegas location spinning tunes. They will have raffles for Vince Neil-signed memorabilia and the food truck out in front of the bar will be open as well.

Tsunis said safety is a top priority for the bar, as they will have adequate security on-hand.

“It’s going to be a great, fun party time,” Tsunis said. “We’re all about security. We want everybody to feel safe. We don’t over-serve and there’s no drugs allowed in here.

“It’s going to be fun, fun, fun and everybody will have a great time.”