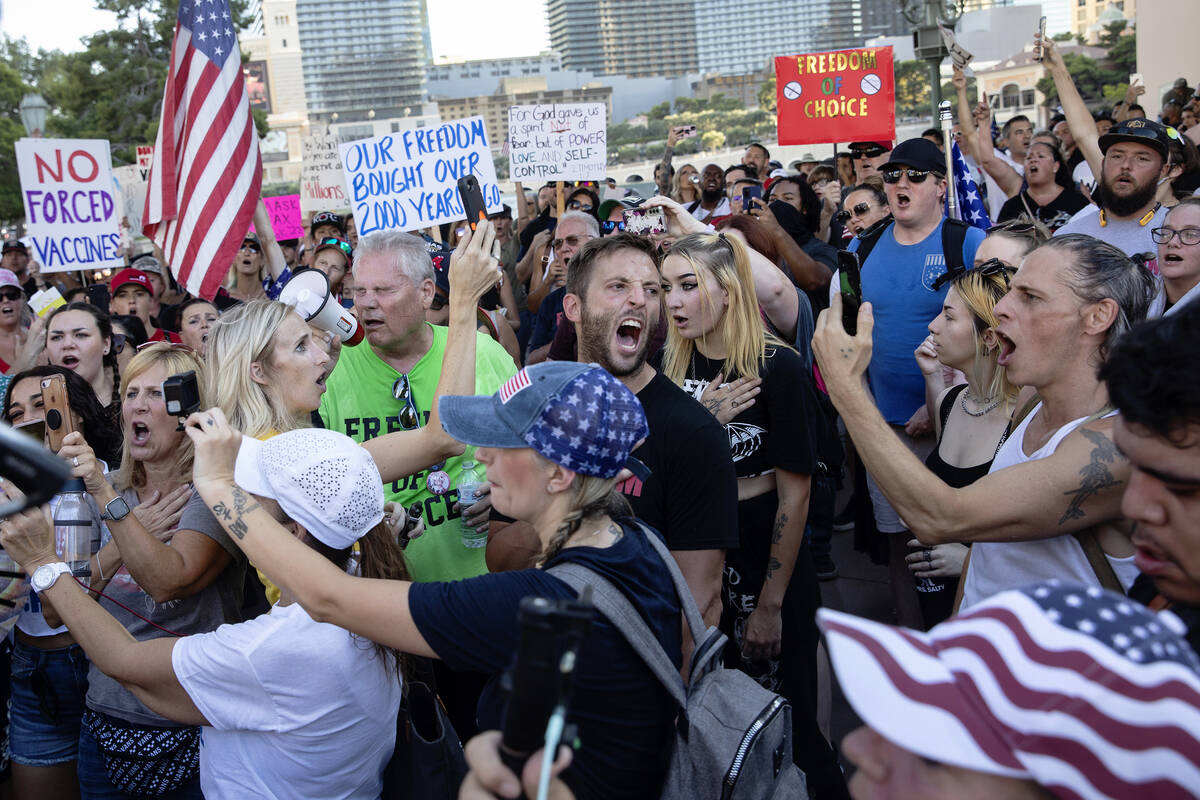 Anti-mask, anti-vaccination and freedom of choice protesters cheer after singing the national anthem during an event led by the "Call Out of Work Movement" outside the Bellagio on Tuesday, Sept. 7, 2021, in Las Vegas. (Ellen Schmidt/Las Vegas Review-Journal) @ellenschmidttt 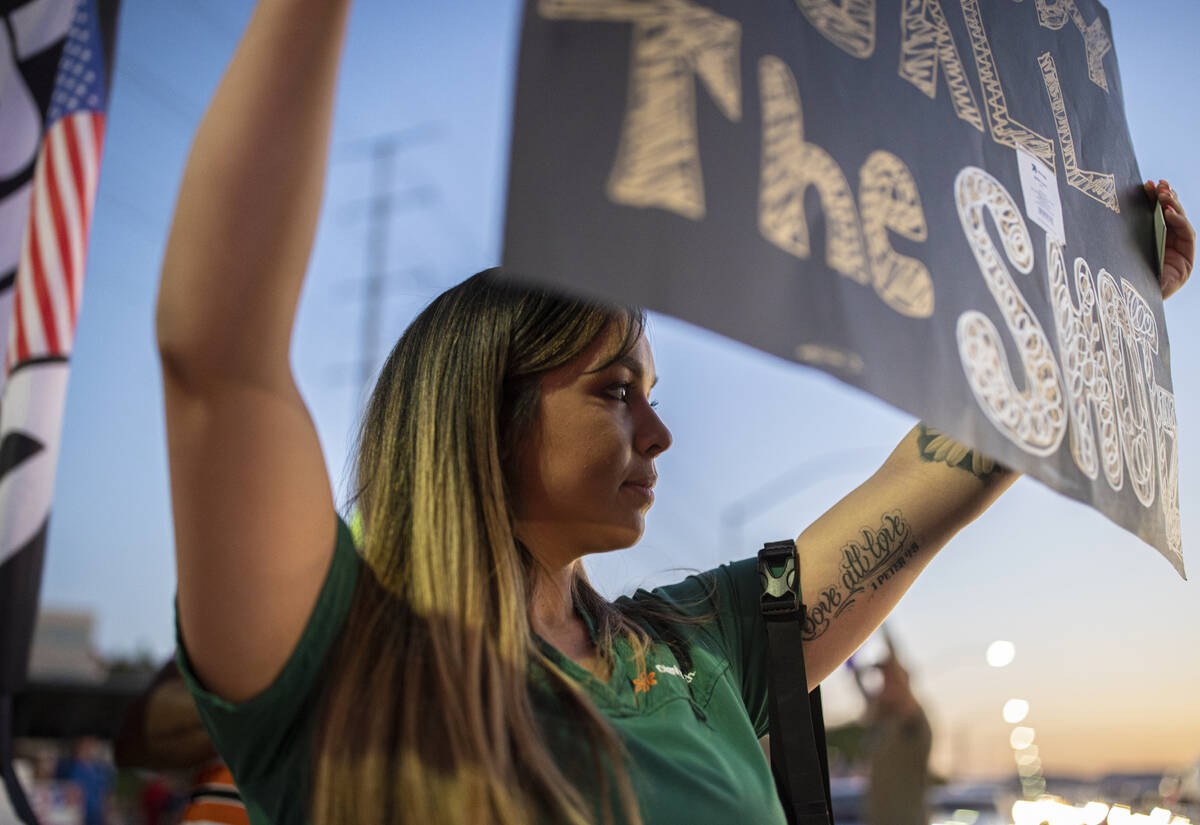 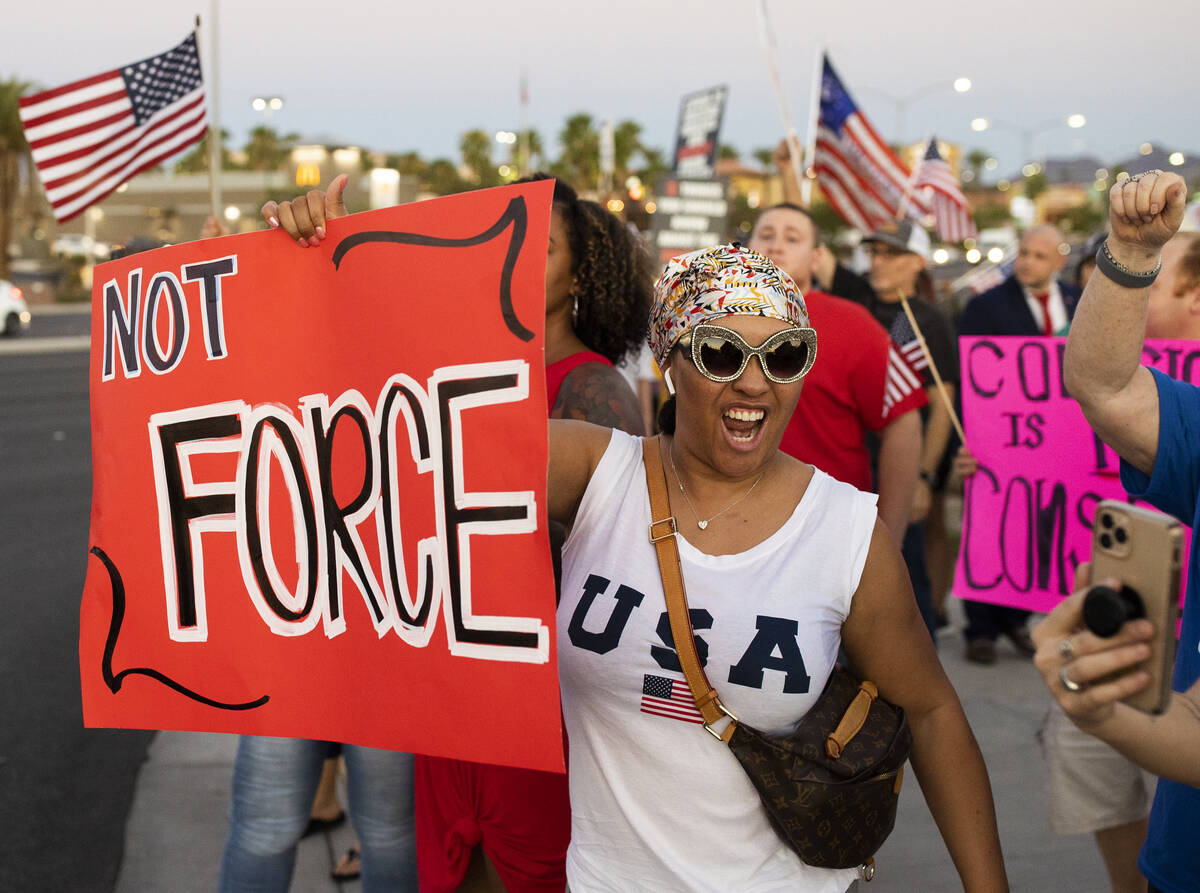 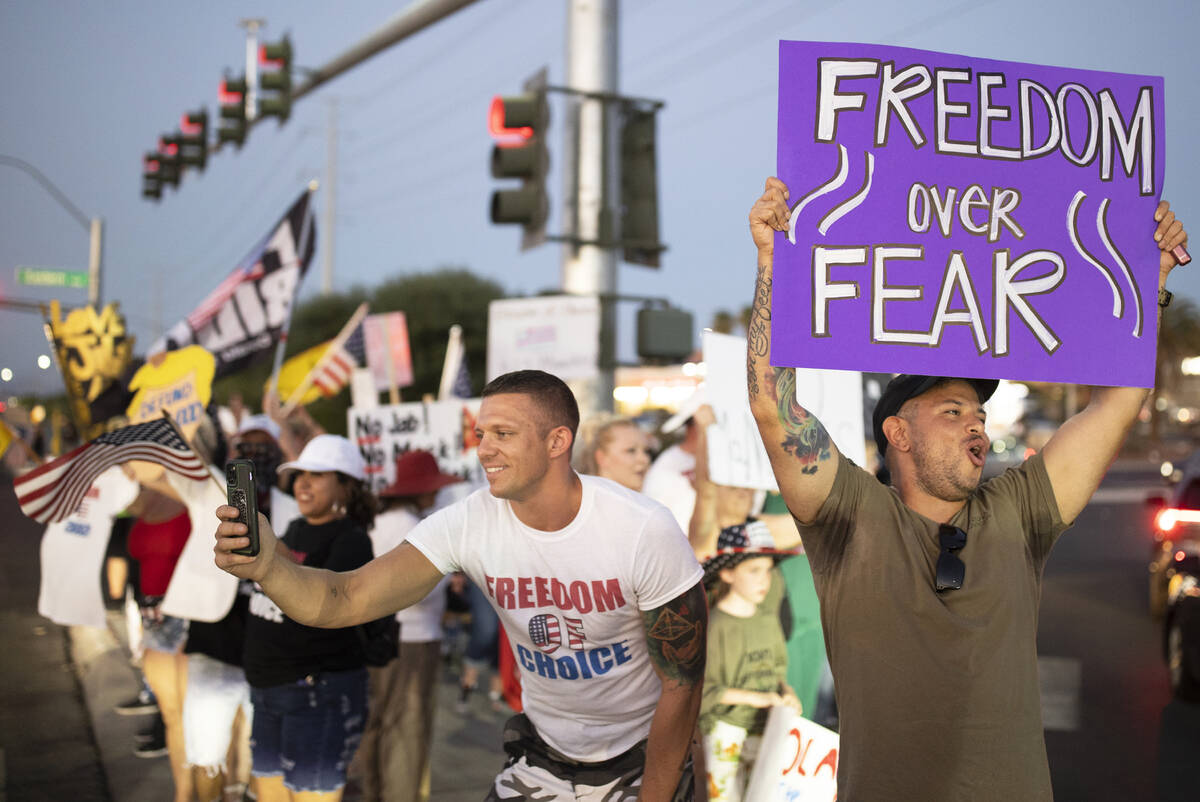 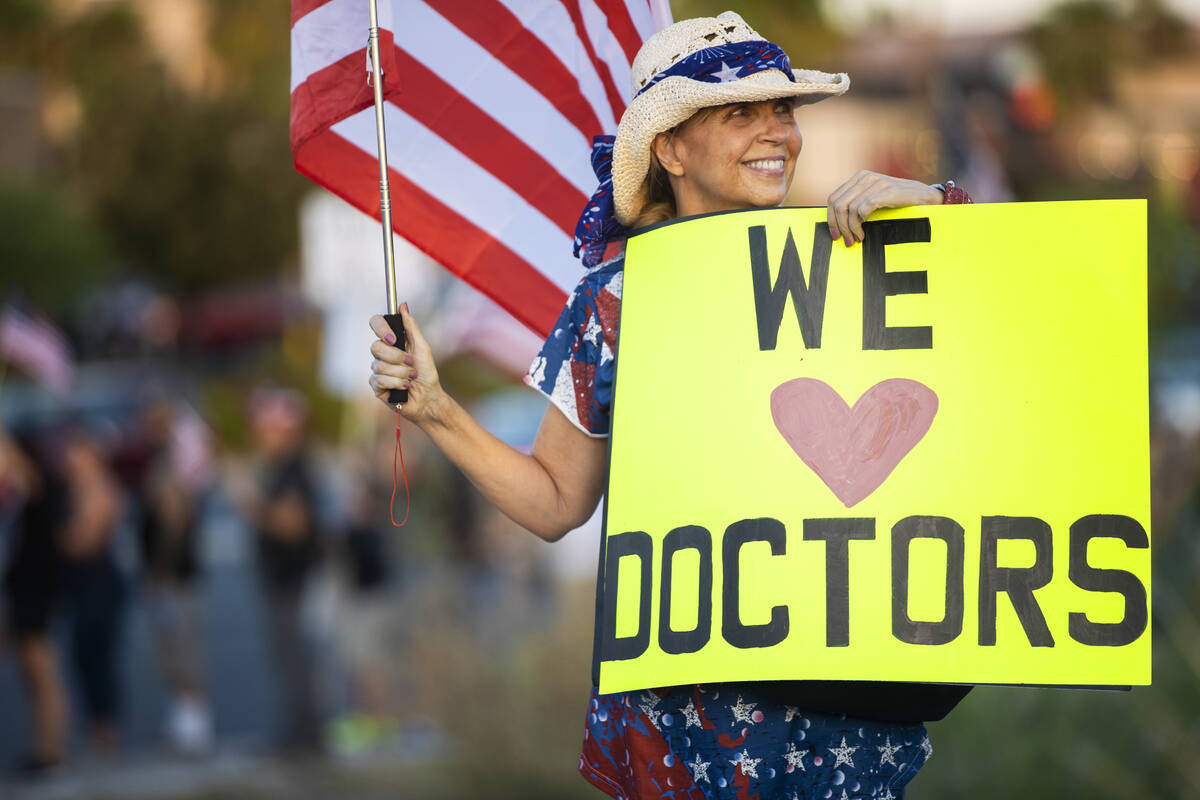 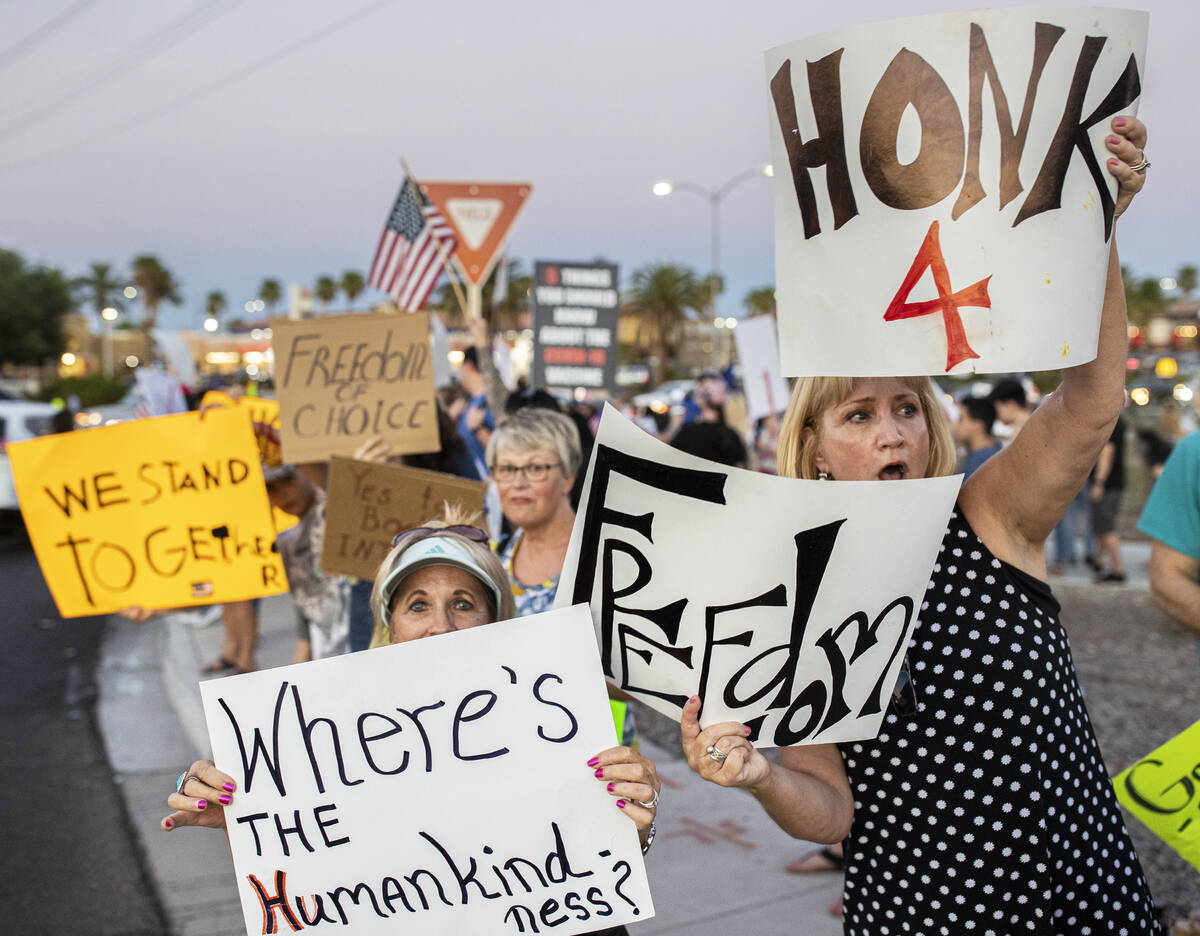 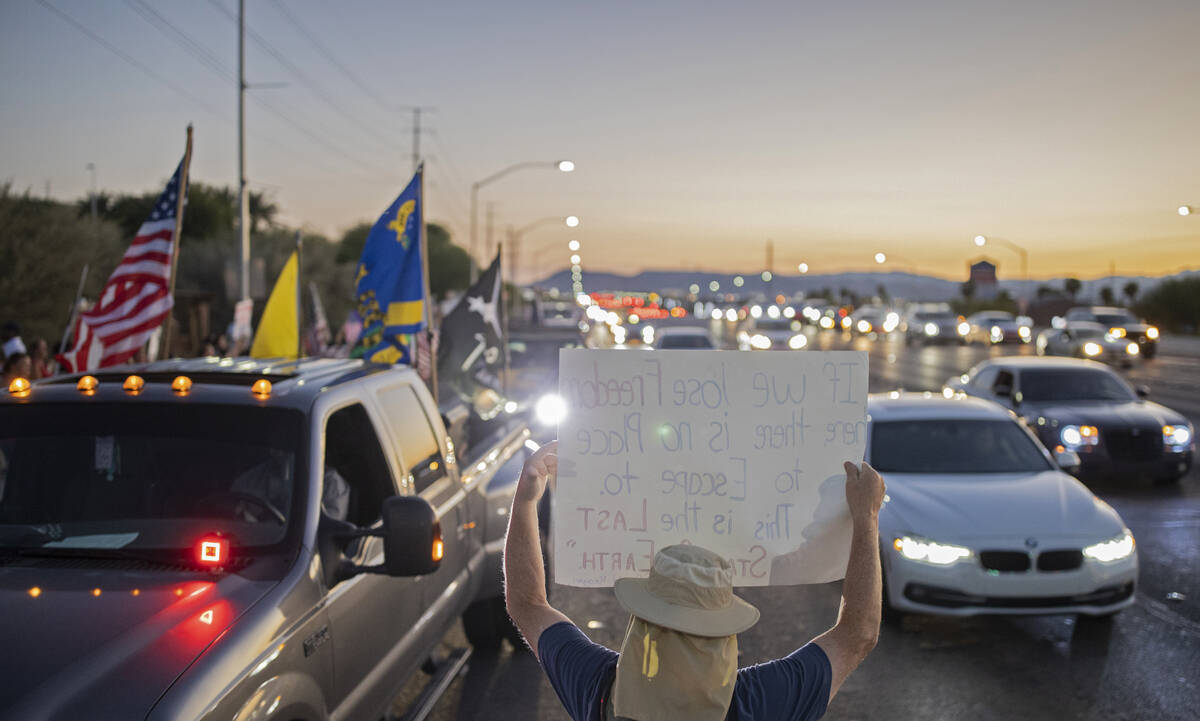 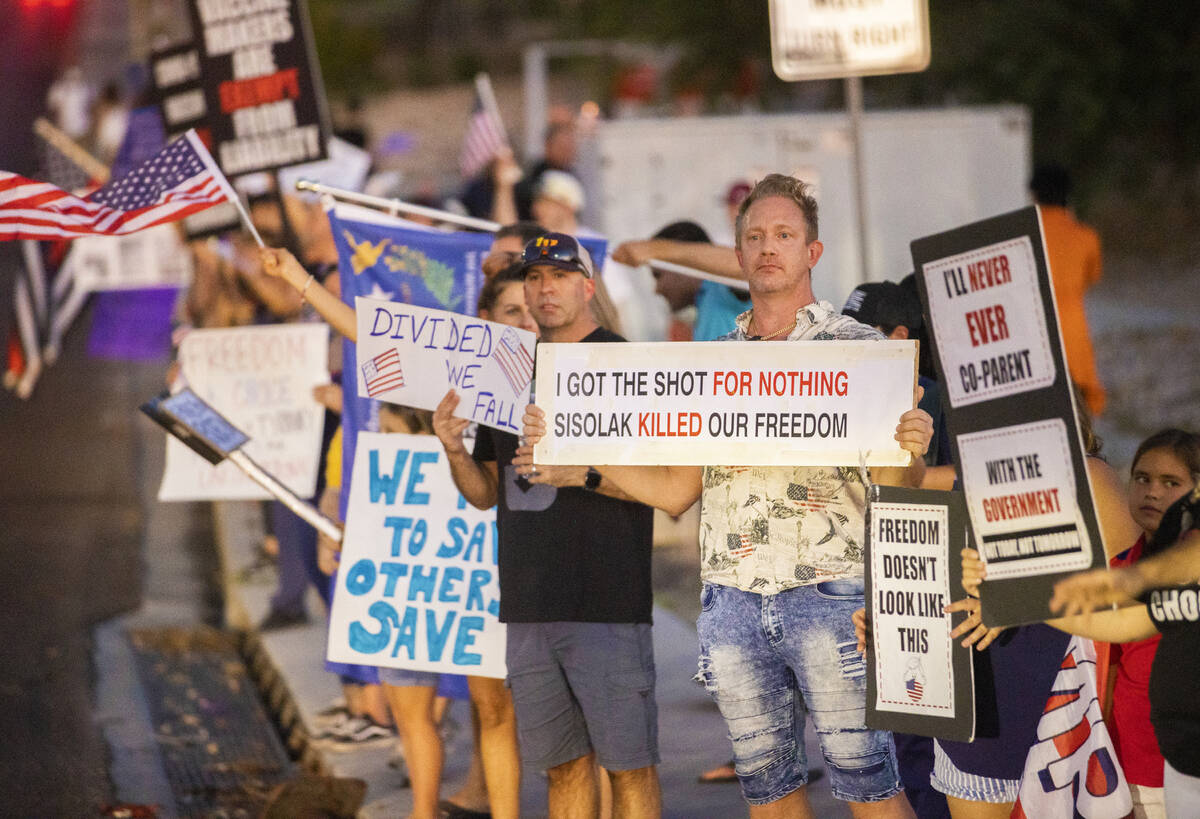 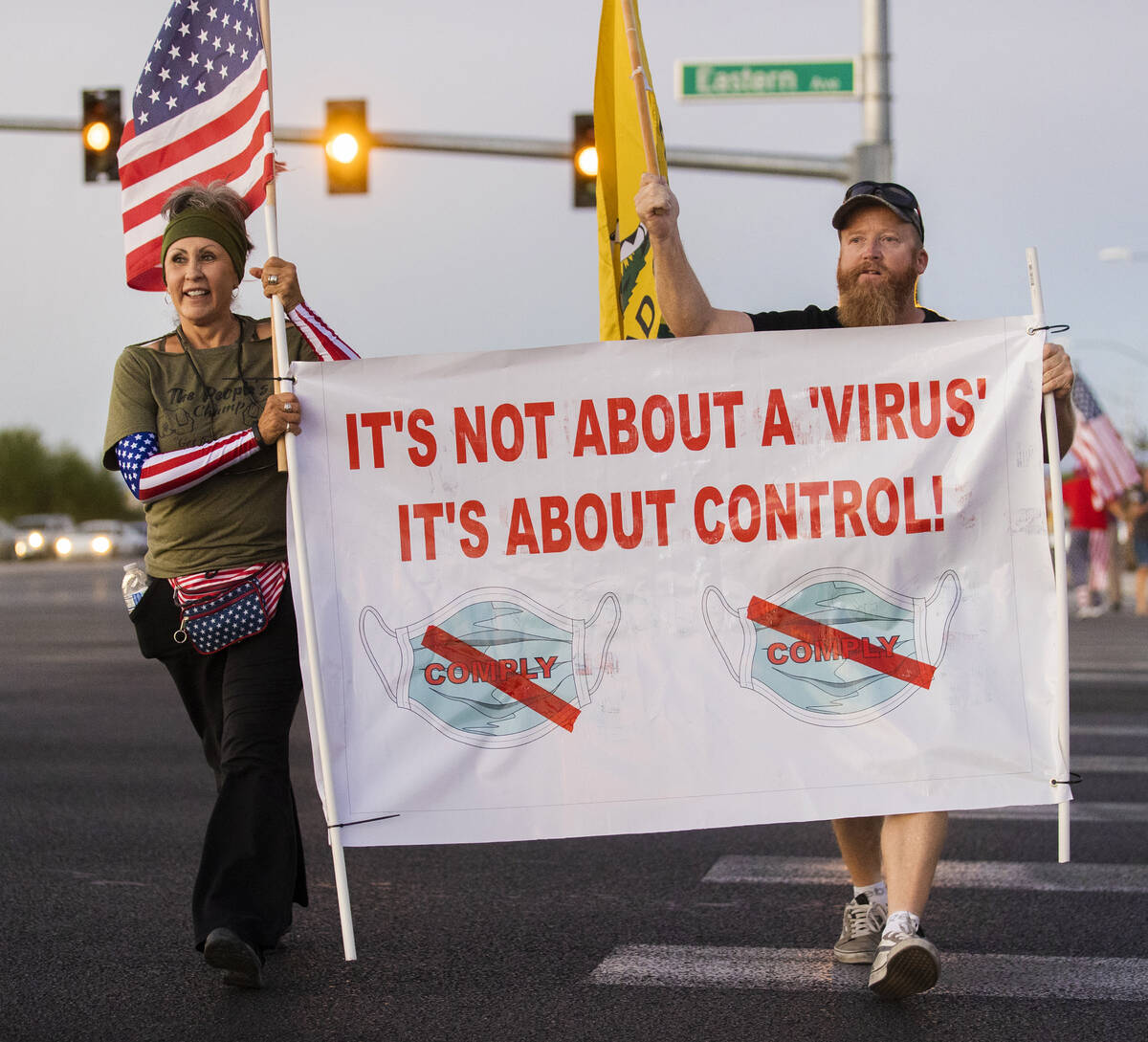 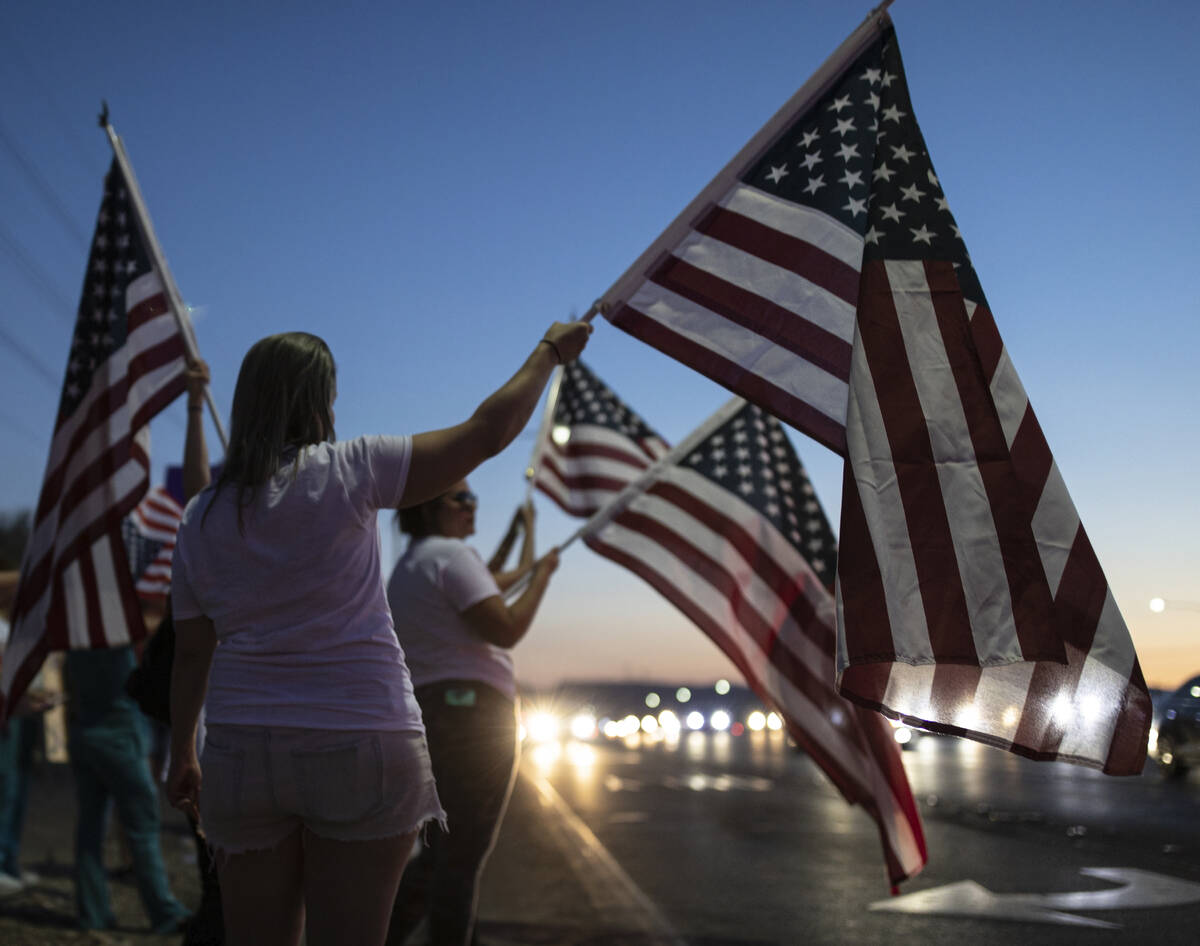 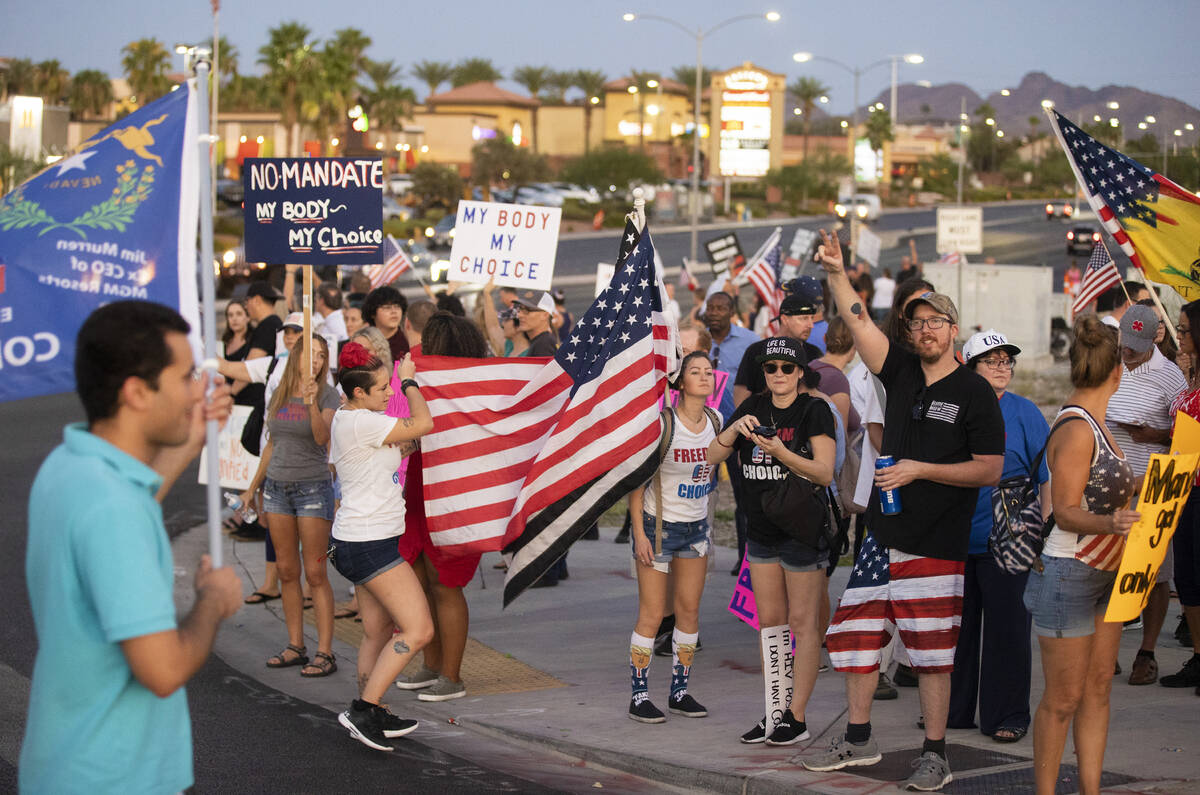 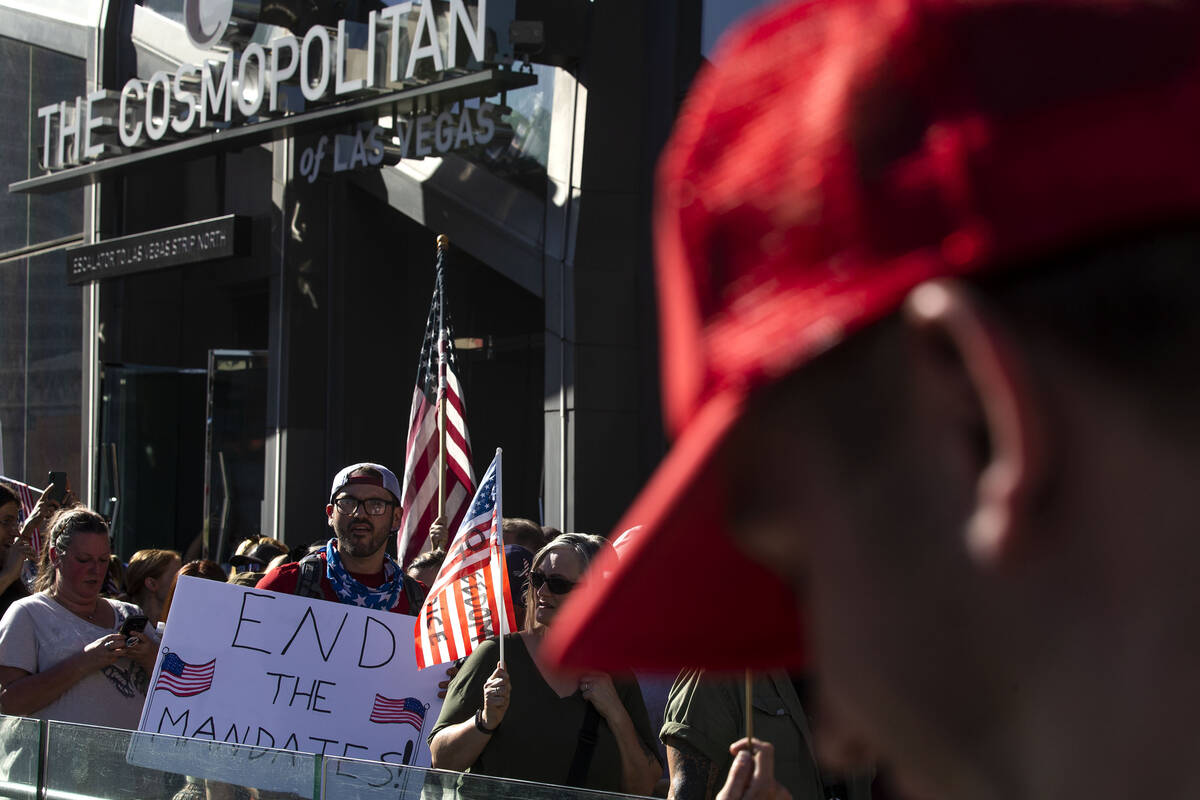 Protesters demonstrate outside of The Cosmopolitan during an anti-mask, anti-vaccination and freedom of choice protest on Tuesday, Sept. 7, 2021, in Las Vegas. (Ellen Schmidt/Las Vegas Review-Journal) @ellenschmidttt 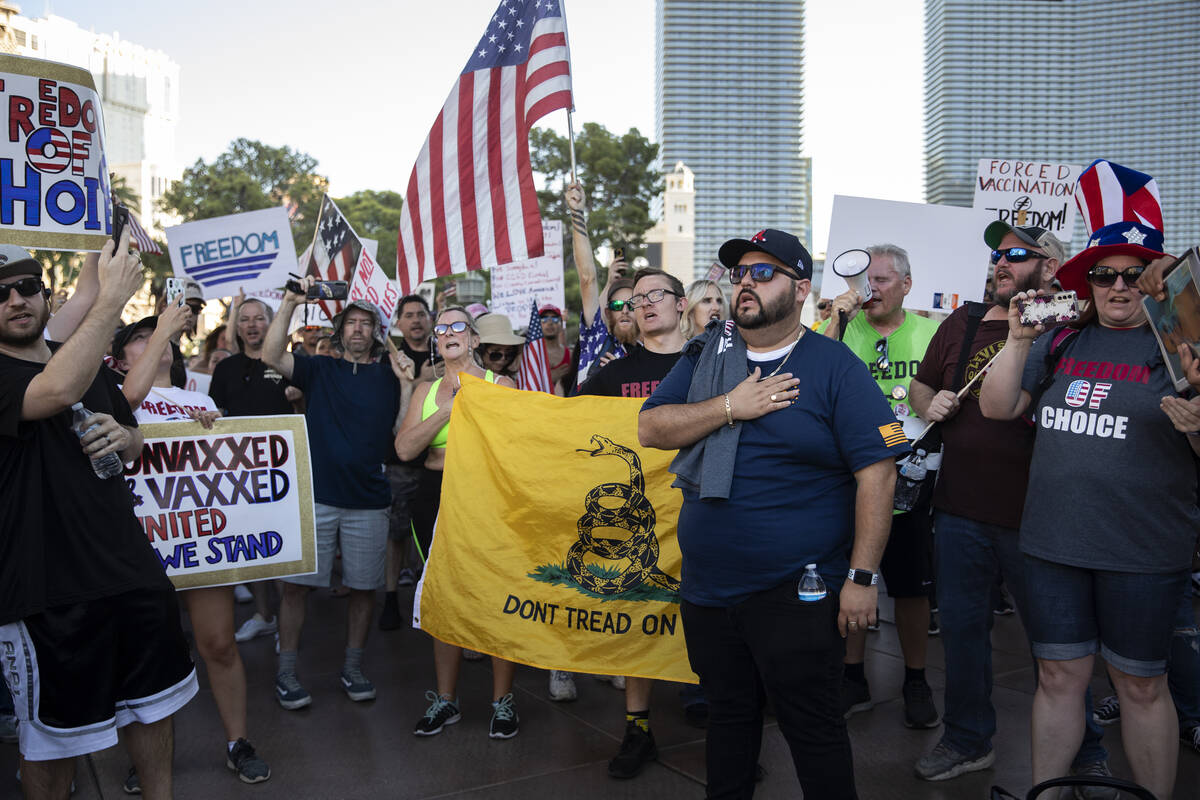 Attendees of an anti-mask, anti-vaccination and freedom of choice protest recite the Pledge of Allegiance outside Bellagio on Tuesday, Sept. 7, 2021, in Las Vegas. (Ellen Schmidt/Las Vegas Review-Journal) @ellenschmidttt 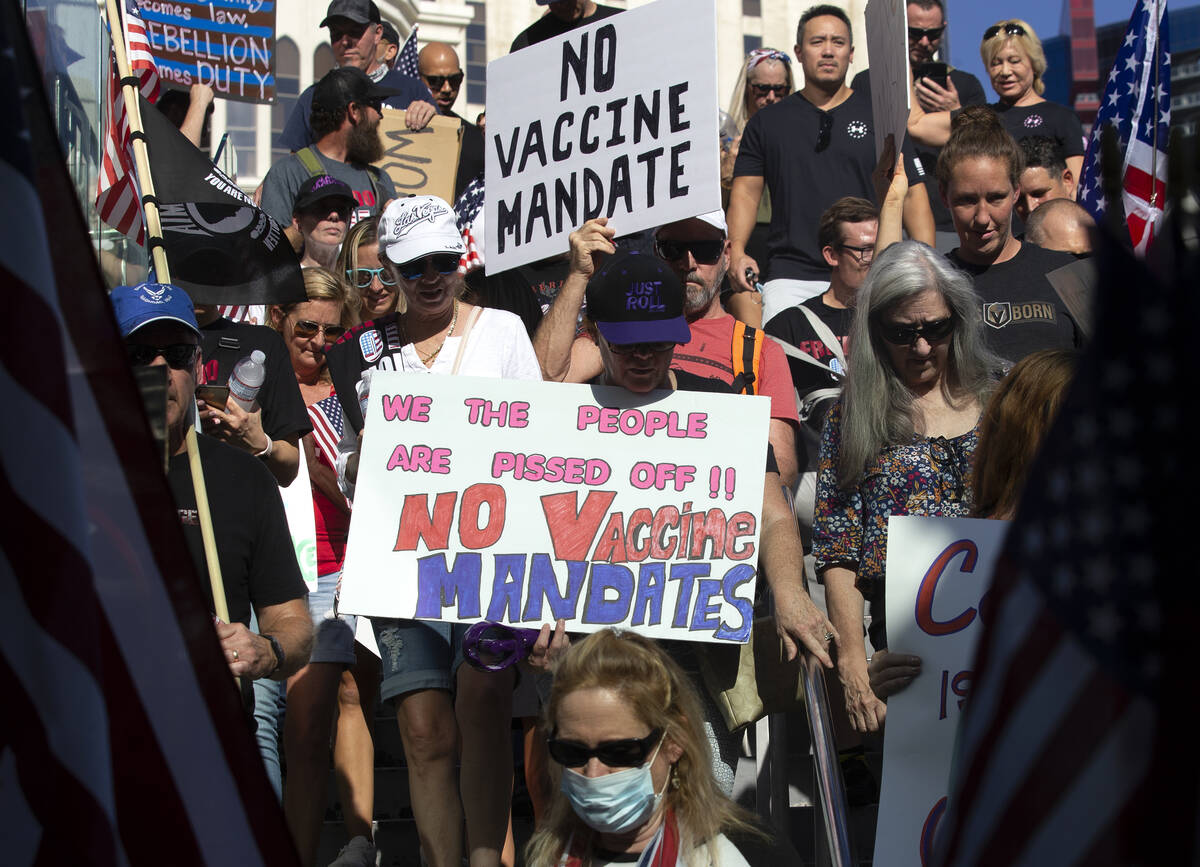 Demonstrators march on the Las Vegas Strip during an anti-mask, anti-vaccination and freedom of choice protest nearby The Cosmopolitan on Tuesday, Sept. 7, 2021, in Las Vegas. (Ellen Schmidt/Las Vegas Review-Journal) @ellenschmidttt 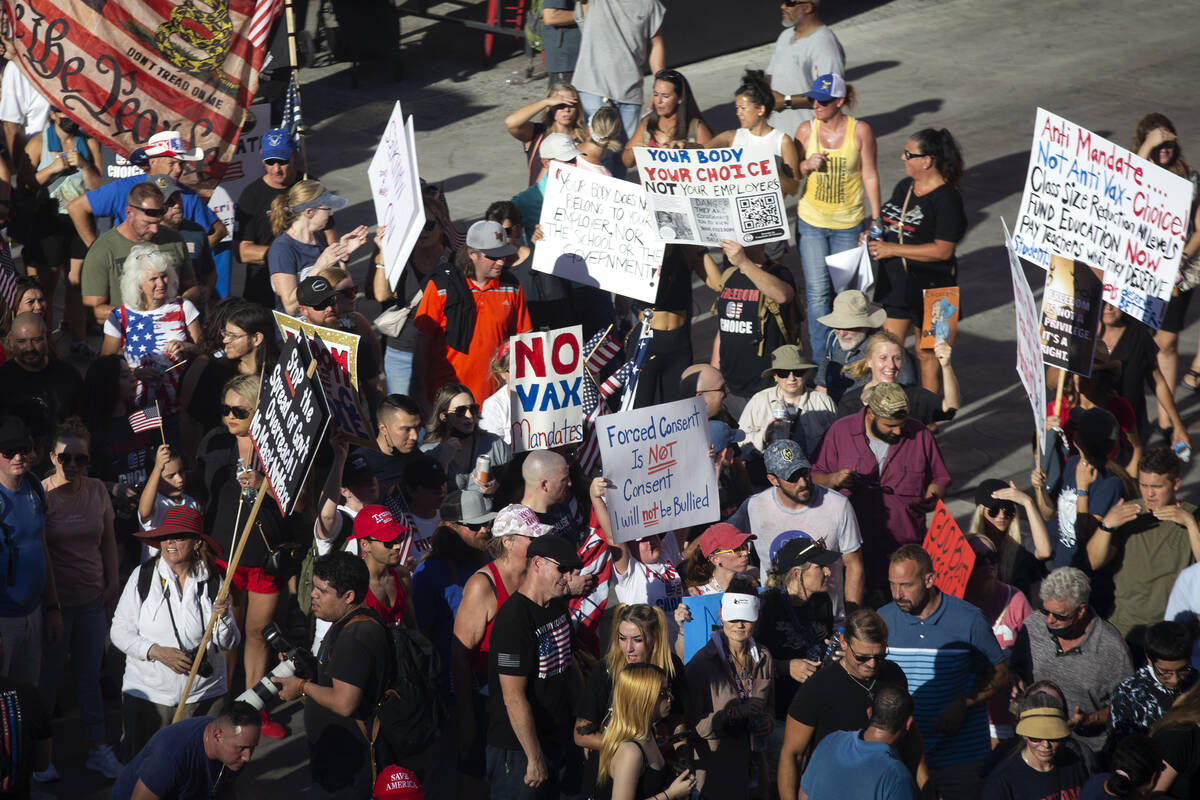 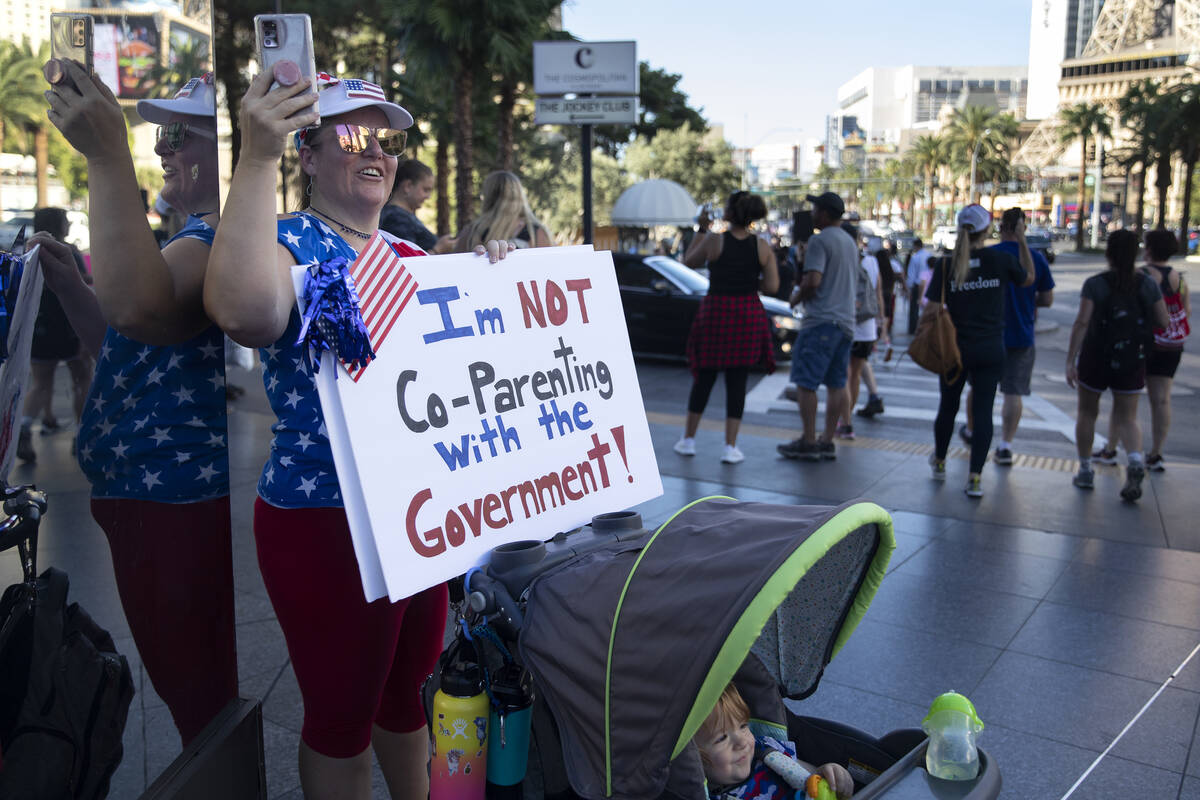 Tiffany Angin, who brought her 1-year-old son Evan Angin to an anti-mask, anti-vaccination and freedom of choice protest, demonstrates outside of The Cosmopolitan on Tuesday, Sept. 7, 2021, in Las Vegas. "I want to be able to make the choices for my children," Angin said of COVID-19 masking and vaccination. (Ellen Schmidt/Las Vegas Review-Journal) @ellenschmidttt 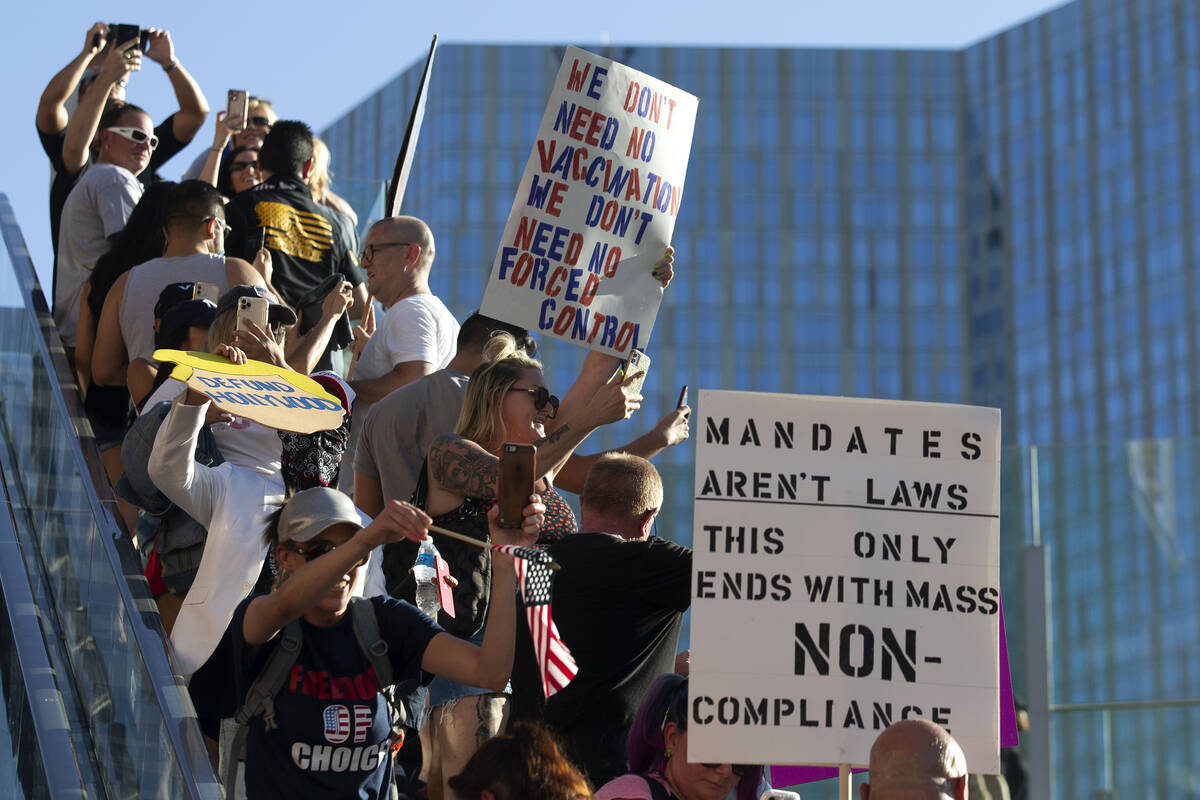 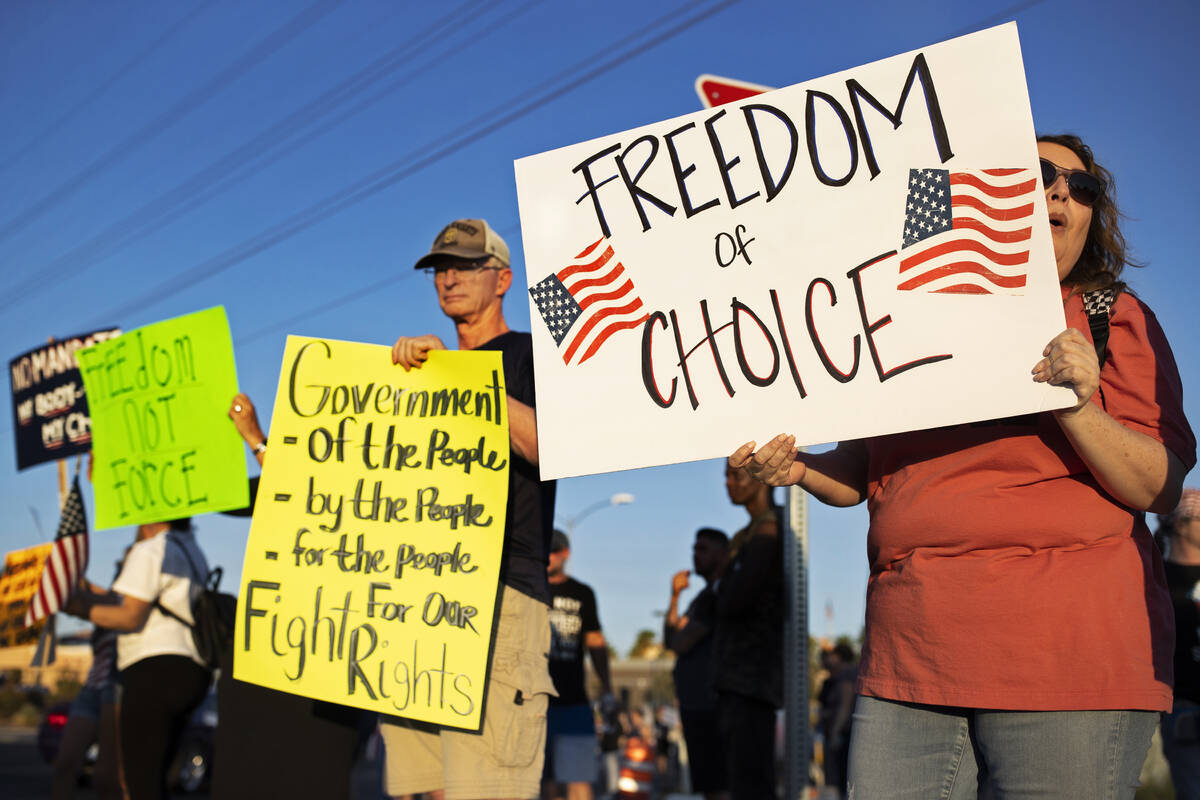 They’ve been warned, ridiculed, cajoled, induced, even threatened in some cases, but still they hold out against receiving the COVID-19 vaccine.

They have heard the public health announcements and ignored the incentive programs, and some have protested against vaccine mandates.

They are Nevada’s calculated unvaccinated, and their reasons for shunning the shot are almost as varied as the coronavirus itself. Some are concerned about long-term side effects. Others say vaccine mandates unlawfully infringe on their constitutional rights as Americans or are part of an evil government plot. Still others don’t think the vaccines work or believe they will make them sicker than the disease would.

Related: Kernels of truth mixed with bad information keep many from vaccines

Then there are those who see signs of a government plot in the drive to inoculate more members of the public.

To learn more about their views and concerns, the Review-Journal talked to about a dozen unvaccinated Nevadans about their decisions to forgo the preventive measure in a state that lags well behind the nation in getting shots in arms. As of Friday, 62.97 percent of Nevadans 12 and older had received at least one vaccination shot against COVID-19, about 10 points below the national average.

Here’s some of what they told us.

‘I’ll use them as my test dummies’

For Brooks Slater, a car repossessor in Las Vegas, the accelerated trials before federal approval of three COVID-19 vaccines on an emergency basis is the deal-breaker.

“I know multiple people that have gotten the vaccine, so I’ll use them as my test dummies,” he said.

He doesn’t rule out getting a shot but says it won’t happen for at least five years.

“I’ll see how it affects them in three, four, five years,” he said. “If they start growing an 11th toe or have another head growing out of their neck, I’ll know that it’s not safe to take.”

The same goes for other members of his family, including his dad, who works at Mandalay Bay and expects to be fired when an MGM vaccine mandate for employees kicks in next month.

What if he wanted to go to an event that required vaccines, like a Raiders game?

“I’ll get a fake vaccine card,” Slater said. “If every business starts making it mandated that you have a vaccine, I’ll be left with no choice. And I’ll be willing to take whatever repercussions come with that because I won’t get the vaccine one bit.”

Many claims made by unvaccinated Nevadans don’t line up with scientific evidence or expert opinion.

Dr. Bayo Curry-Winchell, medical director at Saint Mary’s Urgent Care in Reno, cautions that people should not believe everything they read online about COVID-19 and vaccines.

“I really encourage people to reach out and find accurate information from a trusted source,” she said. “And for those who are still unsure, find someone who can answer your questions and have a dialogue about why you are unsure. And be open to a different possible thought process after that conversation because that’s how we educate ourselves.”

State data provides some insight into the identities of the calculated unvaccinated.

Vaccination rates vary considerably from county to county — ranging from a high of 63.06 percent in Carson City to a low of 17.96 percent in Storey County. Most of the counties on the lower end of the spectrum are rural, with Carson City, Clark and Washoe counties having the highest rates in the state.

State data also shows that Black and Native American citizens are least likely to get vaccinated, with just 6.1 percent of the former and 0.6 percent of the latter having initiated vaccination.

Age also is a determinant. More than 86 percent of Nevadans age 70 and over have initiated vaccination, according to the state data, easily the highest level among age-based demographic groups.

Less than half of those ages 20-29 have gotten their first shot, and that number is even lower in ages 10-19, a group that includes some children who are not yet eligible.

She said she her reasons for not getting a shot are twofold: She doesn’t feel like the vaccines work well in preventing COVID-19, and she also has friends who got “very sick” after getting the shot.

“My friend, he just got COVID and he was vaccinated, and so the vaccine, I don’t feel like it does enough,” she said. “I feel like there’s something else, a better vaccine that they could come out with that doesn’t have to be forced on people. It would make me more comfortable if everybody was more willing to go get it.”

As businesses and government bodies like the Clark County School District have considered and implemented vaccine mandates for employees, foes of the policies have taken to the streets in recent weeks to forcefully express their opposition, including a large rally this week on the Strip and at a School Board meeting on Sept. 1., when hundreds of people showed up at the Clark County Government center to speak forcefully against a vaccine mandate

Among the protesters was Angel Rivera, who rallied the crowd outside with a microphone and portable speaker.

‘This is our choice’

Rivera said afterward that he, like Slater, is waiting for more information on “side effects” from the vaccine. He doesn’t mind if other people get it but says it should be his personal choice.

“Like the mask thing, for example,” he said. “If you want to wear a mask, wear a mask. I’m not an anti-masker. I bring a mask, especially when I have to use public restrooms.”

Rivera spoke alongside Mario Izzo, who said he hasn’t gotten any vaccines since he was old enough to decide for himself. He said he won’t get the COVID-19 vaccine under any circumstances.

“I have everything I need,” he said, pointing to his chest and apparently signaling his reliance on his body’s immune system.

Other protesters had different concerns.

Nikki Settles-Spilotro said she left her job as a teacher at a private school because she believed her school would push through a vaccine mandate in the near future.

Holding a sign that reads “Follow the real science,” she said she opposes vaccination in general because her son is autistic, which she believes is the result of a vaccination he received when he was little.

She hopes to return to teaching but not if she’s required to get vaccinated.

“There’s a multitude of reasons,” she said. “And it’s not just, you know, I’m just anti-vax. Because if you’re fully healthy, maybe that’s a choice that you want for yourself and your body. And that’s your choice. So, I’m not out here to tell you, ‘Go home’ and ‘You’re the devil’ or whatever, I’m out here just to say, ‘Hey, this is our choice!’”

Some protesters also expressed their opposition to the state’s face-mask mandate in crowded indoor spaces, arguing that, too, should be a matter of choice.

The Strip event this week was followed by a smaller protest at St. Rose Dominican Hospital’s Siena campus, which included a handful of health care workers. Many people there said they also wanted more information about the vaccine, specifically what’s actually in it.

Natalie Cortez, a CNA student nurse at St. Rose Dominican’s Siena campus and a single mother of two, said she believes “there needs to be a minimum three-year testing period” for the vaccines and doesn’t think anyone’s job should be on the line over what she characterized as a personal medical decision.

‘I don’t want to fix what’s not broken’

A growing number of government agencies and companies in the Las Vegas Valley have recently required vaccination for their workers, though the edicts have not yet taken effect. In some cases, including the Clark County School District, many employees have threatened to quit over the mandates.

Other agencies, including the Metropolitan Police Department, have said they will require all new employees to be vaccinated against COVID-19 but won’t mandate it for current workers.

Slater, the car repossessor, said his company, which he declined to name, instituted the opposite policy: It will not hire anyone who has been vaccinated, he claimed.

On Aug. 16, the Raiders became the first NFL team to announce it would require all attendees at games to be vaccinated against COVID-19.

People who are unvaccinated can get their first shot at a pop-up clinic outside the stadium, then must wear a mask until they’re fully vaccinated.

That led to a handful of fans deciding to hand over their season tickets. Pasquale Buonsante, who has Raiders season tickets, was among them. Buonsante said he is “proud” to be unvaccinated and thinks the Raiders implemented this policy as part of a “deeper agenda.”

“I believe this is a setup for something bigger,” he said, declining to elaborate. “I think they want people to get sick, that’s why they’re saying ‘go in vaccinated and not wear the mask.’ Well, it wasn’t too long ago that they made an announcement that vaccinated people have to wear the mask. So, they’re kind of contradicting themselves.”