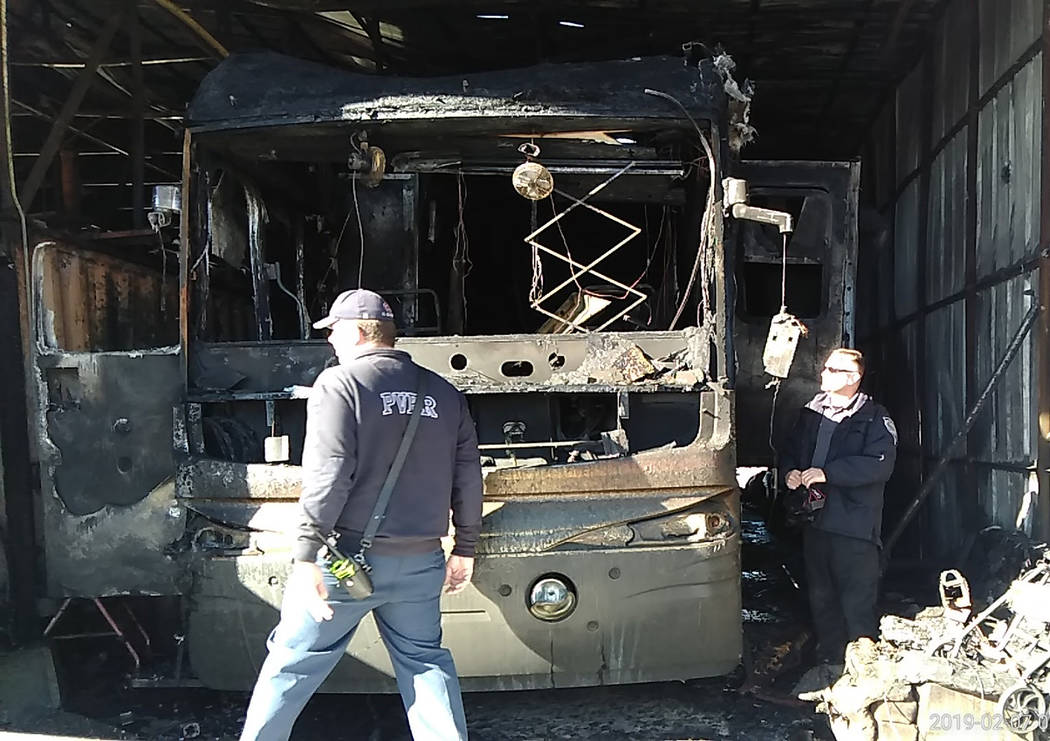 Selwyn Harris/Pahrump Valley Times Michael Kolpak, right, investigator with the Nevada State Fire Marshal Department of Public Safety, inspects the aftermath of a warehouse fire that broke out Wednesday afternoon along the 2700 block of East Charleston Park Avenue. Kolpak said he believes an electrical malfunction in a motorhome parked in structure was the origin of the fire. 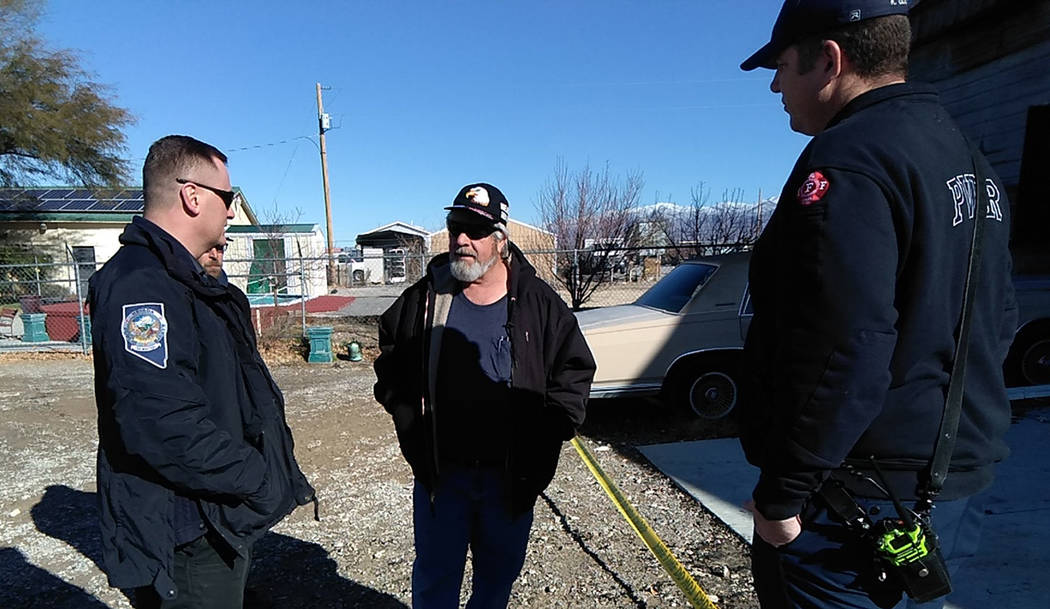 A fire destroyed the contents of a Pahrump business owner’s warehouse on the 2700 block of East Charleston Park Avenue just after 5 p.m. Wednesday.

John Benedict, owner of Pahrump’s JonAire Heating, Cooling and Refrigeration said he’s fortunate the fire did not affect his day-to-day operations, as the warehouse was not part of his business.

Benedict noted that it was a neighbor who called him and 911 after noticing smoke and flames coming from the roof of the structure.

“I was home watching TV and I had no idea,” he said. “I came out the door and saw the smoke and the flames shooting out of the roof. We called 911 and my neighbor said she already called, and then it evolved from there.”

Though no injuries were reported, Benedict said the fire destroyed his motorhome and damaged several vehicles stored inside the structure, which also housed many other of his belongings.

“My 40-foot motorhome is a total loss, as you can see,” he said. “It was a 2007 model. The fire did spread and damaged some ATVs that I have. I’m not sure how bad they are damaged because I haven’t had time to inspect them just yet. In the other part of the garage, I had a boat and a ‘55 Chevy, but it doesn’t look like they suffered a lot of damage. They might be salvageable but I won’t know until we get it all pulled out of there. My business was not affected by the fire, and nobody was injured. Thank God for that.”

As far as a dollar amount in terms of damages, Benedict estimated it to be in the six-figure range.

“At this point in time, the fire appears to have started in the motorhome parked in the warehouse,” he said. “We were dispatched to perform an origin and cause investigation of the fire because there is a potential for a high-dollar loss due to the number of contents and vehicles inside the warehouse. The fire caused very extensive damage.”

Benedict, meanwhile said he’s going to carry on despite the loss.

“As far as how I’m doing, I am very upset,” he said while looking at the burned out warehouse. “It’s discouraging to work all your life and have this sort of thing happen. I am 60-years-old and we’ve worked so hard to get all this stuff and it’s all gone in a matter of 20 minutes. I just thank the good Lord that nobody got hurt. I praise him for everything he’s given me. There is a lesson to be learned here. I’m told the fire started in the motorhome most likely, and we could have been in it somewhere when it happened. So maybe God was protecting us.”

At the height of the fire, Pahrump Valley Fire and Rescue Chief Scott Lewis classified the scene as a “high-risk assignment,” as there was at least 100 gallons of diesel fuel in the motorhome’s fuel tank.

“The motorhome holds 120 gallons of diesel fuel, plus it has a 20-gallon propane tank,” he said. “They were both full because I always keep them full in case the world comes to an end and we need a place to go. The fireman said that diesel fuel is not as volatile as gasoline, unless it gets under a lot of pressure, and then it explodes. It has to get a lot of intense heat and most of the heat was at the ceiling, as you can see.”

When asked about recouping his losses, Benedict was not entirely certain.

“You know how insurance companies are, so I’m sure they’re going to try to wiggle their way out of everything like they always do,” he noted. “The good Lord will take care of us and our health is good. He has blessed us and if this is the worst thing that happens in my life, I’ve had a pretty good life.”

“My business is doing great and I really want to thank all of Pahrump for being loyal to us over the years. “We have 21 employees now. I thank the community and the Lord, for keeping these people working, because they all have families. We opened in 2001, so it will almost be 20 years. I’ve been in the business for almost 45 years.”

Benedict also praised the efforts of first responders, who quickly arrived on scene once they were dispatched.

“I want to thank all of the paramedics and the firefighters because they did a great job, and they knew what to do,” he said. “They came and they assessed what was going on and got right on it. They saved a lot of my stuff. It could have been much worse. They were here in about five minutes after my neighbor called 911. The sheriff’s deputy was here first and he was securing the scene and getting everybody moved out. I just want to say again, thank God nobody got hurt.”

It took roughly five hours before firefighters cleared the scene.