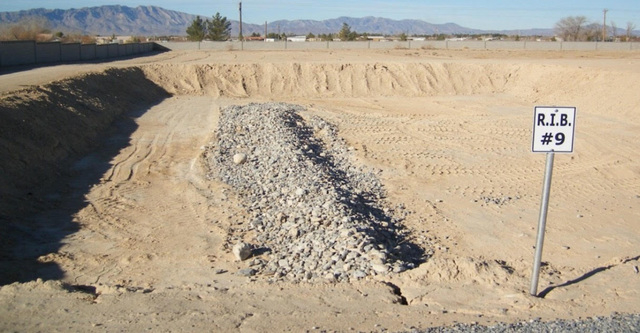 Proposed rapid infiltration basins continue to spur safety concerns among residents, however officials last week gave a go-ahead to the construction of the system in areas of declining water levels in Pahrump Valley.

After a lengthy discussion, the Nye County Water District Governing Board greenlighted construction of RIBs in areas of declining water levels for the purpose of flood control and direct replenishment of the aquifer.

In the meantime, concerns about infiltration of the effluent water to the aquifer prevailed throughout much of the last WDGB meeting, preventing officials from making a decision on the use of effluent from the Utilities, Inc. of Central Nevada wastewater treatment plant.

“The only way I can vote for the construction of a rapid infiltration basin that accepts effluent from the wastewater treatment plant is if the effluent is treated to the potable water standards, period,” WDGB Chair Greg Dann said.

Under the permit granted by the Pahrump Regional Planning Commission in January, UICN planned to construct two rapid infiltration basins, or RIBs, at the former Willow Creek Golf Course by modifying existing overflow ponds located on the property for the purposes of effluent disposal, flood control and groundwater recharge.

Bruce Holmgren, staff engineer for the Bureau of Water Pollution Control at the Nevada Department of Environment Protection, said the system would put nonpotable water into a RIB and essentially use the soil as the final filter before the nonpotable water reaches the aquifer.

“Most of your degradation for groundwater coming from a wastewater effluent is nitrogen and this plant treats the influent so that discharge is less than 10 milligrams per liter total nitrogen. That’s more restrictive than the drinking water standard,” Holmgren said.

“The system has three monitoring wells and they would detect if there’s been degradation,” Holmgren said. “The permit was developed on the idea that it’s protective of waters in the state and the monitoring wells confirm that.”

UICN wants to use the effluent from UICN wastewater treatment plant No. 3 for reuse or storage in various ponds on site and to send the water to Lakeview Golf Course for reuse or dispose of the effluent in the new onsite RIBs on the property.

Two weeks ago, a number of officials toured UICN and the Pahrump Utility Company Inc., wastewater treatment plants, where they observed operations and met with employees.

UICN President Wendy Barnett said beneficial reuse of effluent is a “good thing” for the community.

“I am continually dumbfounded why it is so hard to do a good thing in this community,” she told WDGB at the meeting.

She said the water was “highly tested and highly-regulated, treated effluent water.” The fact that it was raising suspicion as runoff water made no sense to her, Barnett added.

“The difference between a RIB and an injection well is an injection well puts the water directly into the aquifer,” he said. “Let’s not get that confused with the RIB. The RIB is just like a septic tank leach line, it has to go through a certain amount of soil before it reaches the RIBs and that’s one of the best cleaning methods there is for water.”

Nye County Commissioner Dan Schinhofen argued that the system is already in place. A number of RIBs already operate in several towns in Nye County including Beatty, Tonopah, Gabbs and Pahrump.

“It’s not something new,” Schinhofen said. “It’s something that’s been used over and over and continuing to say we have a great potential of poisoning water doesn’t make it true.”