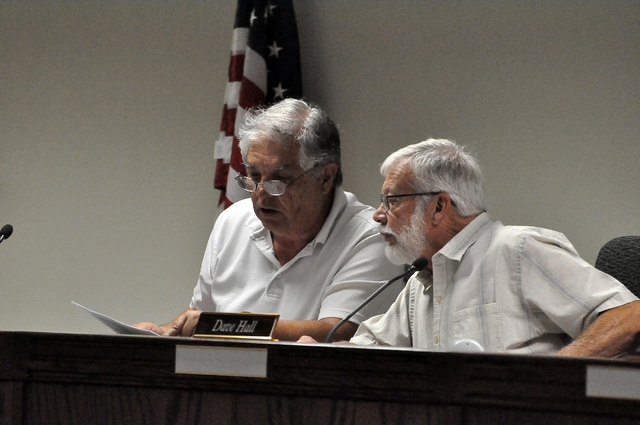 The county Water District Governing Board keyed in on domestic wells after discussing a number of bill draft requests that were proposed by the boards contractor, Oz Wichman, in a staff report on Monday.

(State Engineer) Jason King would like to clarify that in a legislation to where in times when the basin is in serious troubles that the domestic well owners are still allowed to use well water for indoor use, Wichman said.

Kings move would be an exception to the current law that would require complete curtailment of junior priority domestic wells if curtailment by priority was required in a groundwater basin.

King wants to amend the provision to restrict outdoor use of domestic well water in times of curtailment with no curtailment of indoor use, but members of the board made a recommendation that the measure would be done as a last resort for balance of the basin only and allow for indoor use of water and use of water for domestic animals.

From my seat in the fray, completely up to the governor of the state, nobody has an interest in completely shutting off domestic wells, period, Wichman said. So Jason King is looking for an exception in the law that if it does really get down to the fray, ends, that he has a way to curtail the domestic well without having to tell them that they cannot use indoor water.

Wichman said the board should support Kings idea, but board member Ken Searles said he wants to set up priority that would prevent the state engineer from taking individual water.

I would try and put a BDR to limit for indoor use and for domestic animals, as a last resort only, Searles said.

Domestic wells are of a junior priority to most of the 60,000 acre feet of water rights on the books in the Pahrump Valley.

Fifty-six of Nevadas water basins are severely over-allocated, according to Great Basin Water Network. That means that there isnt enough water to meet the water rights that the state has dished out.

If you look at the figures, the highest use of water in the state of Nevada is for irrigation. I think thats what the state engineer is after, Wichman said.

Other proposed BDRs from Wichmans staff report that officials discussed at the meeting were water conservation plan, law changes regarding mitigation and limitations on new domestic wells.

During the 2015 legislative session, the board supported the water conservation plan, one of the elements of the Basin 162 Groundwater Management Plan.

The Legislative Commissions Subcommittee to Study Water has been gathering information from different groups across the state and will work on recommendations for future legislation during its last meeting.

The subcommittee will hold its last meeting at 9 a.m. on Aug. 26 in Carson City. The meeting also will be teleconferenced at the Grant Sawyer Building, located at 555 E. Washington Ave., in Las Vegas.