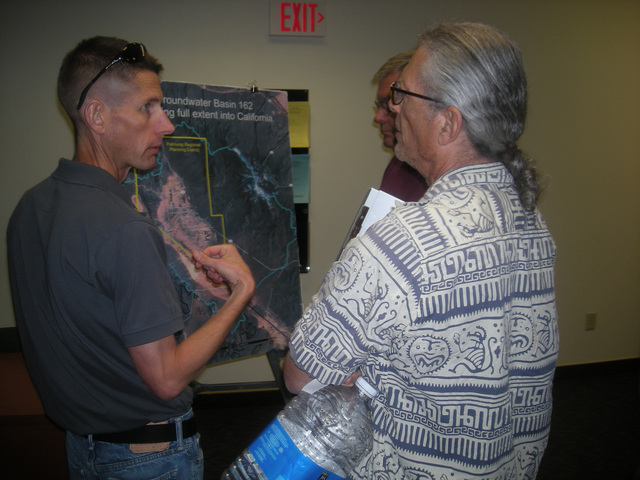 Deputy State Engineer Kelvin Higginbotham said his office could take other steps to avoid listing Pahrump as a critical management area for water under a new state law, like declaring it a less severe “active management area.”

He also pointed to proactive measures taken recently by his office, like revising figures upwards on the potential recharge into Pahrump Basin from 12,000 acre feet to 20,000 acre feet.

“That still doesn’t mean the basin’s not in trouble. The potential’s there for 62,000 acre feet of groundwater being pumped as well in permitted and certificated rights and up to 20,000 acre feet in domestic wells,” Higginbotham said. “It’s still a basin that’s very sensitive. We know that we issued the water rights. We know it isn’t the residents of the basin or the county or anybody else so we have to take responsibility for that. Even though it wasn’t us, it was still our office and we have to figure out a way for everyone to have water for their future needs.”

Higginbotham took responsibility for his office, in a four-hour workshop that included finger pointing between well owners and developers.

“I have been trying to make the argument that to do nothing is a valid option because if you look at the few meter readings we have, it shows that domestic well owners, frankly stated, are pretty water-conscious. I’m seeing a fair amount of paranoia about metering of domestic wells but my honest question to the people of this community is if I don’t have good math, decisions will be made,” Wichman said.

Nye County Water District General Manager Darrell Lacy said water levels are dropping on the west side of Pahrump Valley where there are a lot of domestic wells, but rising in areas to the east, like the Manse Spring. Meghan Hodgkins, from Glorieta Geoscience, suggested injecting water from Manse Spring into two wells on the valley floor.

“We’ve chosen the two areas where the well density is the highest, which corresponds to areas of the basin where ground levels are dropping the fastest,” she said.

Committee member Greg Dann wants meters on domestic wells, he said only 8,582 acre feet of water rights out of the 62,504 acre feet on paper are presently being put to beneficial use. He also wants to prevent outflows to California and pumping should be spread out on the alluvial fan and reduced on the valley floor.

Dann said the importation of water will play a big role, but it’s not going to happen tomorrow because of the exorbitant cost. But he doesn’t see Pahrump growing too much past 50,000 population without an alternate water source. Dann also objected to people getting indefinite extensions on their water rights.

Dann conceded “I’ll probably get shot down” on suggestions for a valley-wide public water system and conceded there isn’t money for it. But his other controversial idea, a moratorium on development, he called “the meat and potatoes” of his plan, in particular restricting big water users like any future golf courses. The committee could institute a water rights buy back program, Dann said.

“It’s not costing people in the municipal world to just hold their water so they just hold it. They can hold it for 200 years from now. I don’t think that’s a good incentive for the benefit of the valley,” Dann said. He added, “I would like to propose that all new wells to be drilled in the valley for domestic use only be allocated a half acre foot per year.”

Board chairman Greg Hafen II read off a list of suggestions for the committee: metering consumption to raise awareness of water use; prohibiting private wells inside a utility service territory; allowing utility companies with infrastructure to reach more lots; an aggressive program to remove vegetation consuming lots of water like salt cedars; creating incentives to voluntarily connect to public water systems where feasible; stripping unused water rights and an aggressive water conservation plan.

“I’m having a hard time believing anybody in the community would propose more taxes, higher property taxes, sales taxes and impact fees. That is under the heading of suggestions,” Bentzen said. “I haven’t found anybody that I talked to that is in acceptance of putting a meter on their wells.”

“If the production of new domestic wells is a concern then it stands to reason these potential new domestic wells should be a part of the solution. However all owners of empty lots should have a chance to build their homes,” Harris said. He added, “we should not be required to meter existing domestic wells. If you want to volunteer that’s fine.”

To stabilize the water table where domestic wells are having problems, Harris proposed drilling wells in the southeast part of the Pahrump groundwater basin where there’s no wells, to capture water draining into California and pipe it north to the three utility companies. Another suggestion was to send treated effluent to areas where the water table is dropping.

“The formation of the three utilities was a stroke of luck for all of us. Without the utilities a lot of us would still be farming and we would be pumping several thousand more acre feet than what we are pumping now,”he said.

Vicki Hafen Scott, with Pahrump Utilities Inc., said though her company may not be pumping all their allotted acre feet of water rights they are still obligated to serve future development.

Frank Maurizio, president of the new Private Well Owners Cooperative, said the committee can only do what the state Legislature allows under Dillon’s Law. If the engineer doesn’t say the basin is over-appropriated the committee is wasting its time and violating the law, he said.

John Bosta wants the state engineer to call for a beneficial use status on all water rights in the Pahrump basin with all unperfected water rights subject to forfeiture in an attempt to bring down the water rights on paper to more balance the recharge rate.

“This will solve that big discrepancy of numbers and I believe it is this board’s obligation to protect the domestic wells of 11,200 people,” Bosta said.

Committee member Wendy Barnett, president of Utilities Inc. of Central Nevada, said there are already 11,106 domestic wells in Pahrump, if the state didn’t reduce their two acre foot allotments that would still be 22,392 acre feet of water used annually, above the perennial yield.

Fred Sobel said he wants to drill a well on his property in a neighborhood commercial zone on Calvada Boulevard. But Higginbotham said, “once you start drilling domestic wells in a service area where you can be served, you are then going to cause harm to that utility that’s set up to serve the area.”

Higginbotham, agreed with Bosta’s comments the state engineer’s office is required to protect domestic well owners, but he said that could include requiring them to hook up to a utility system. The state engineer already has a lot of powers, Higginbotham said, including the authority to limit the extraction of water from any well, even when it’s not in a critical management area.

“They did set up a tax directly on that, it’s $30 per domestic well, $30 per acre foot and then they had a breakdown in that $30 what each dollar was used for. It was used for permanent recharge, it was used for a groundwater connection program where domestic wells failed, they subsidized that. A substantial portion was used for education,” Coache said.