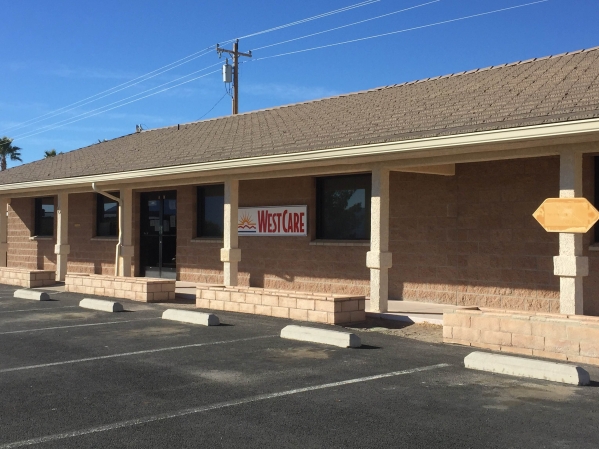 When someone is addicted to drugs, getting the help they need to kick the bad habit is tough for some to do, especially with no help. Luckily for residents, a local health care outlet is there to help them get through what for many is their toughest time.

WestCare Nevada, located at 1161 S. Loop Road, has been in Pahrump for about 10 years, and despite that, many residents aren’t aware that they are located in town until they are appointed to them by drug court, due to them being tucked away behind the main highway in town.

WestCare, who started out in Las Vegas and has expanded all over the country, is now found in 17 states and two U.S. territories. It offers various programs, including youth and adult assessment, intake and referral, alcohol and drug education, prevention and intervention programs, adolescent and adult outpatient substance abuse treatment service, youth and adult drug court services and art programs for “at-risk” youth.

Tamara Jones, supervisor of the Pahrump WestCare location, explained that there is a big need for the facility’s services in town, especially the addiction-based programs.

“Substance abuse is the meat and potatoes of what we do,” Jones said.

Assessment is the first step in the treatment process. Assessment is where the staff works to figure out the best course of action to take for each individual who comes to them seeking help.

Also offered at WestCare is services, which is just what it sounds like, staff working with area youth to curb substance abuse and gambling abuse before it begins. The group of educators hopes to teach the youth to be goal-minded adults using positive action, an evidence-derived program which helps deliver the program’s message.

The Level 1 treatment program is the lowest level of treatment the facility offers, which consists of a mix of treatment options.

“Generally, for our outpatient program it is group once a week, and then they have monthly individual meetings with their primary counselor,” Jones said.

Jones explained having both one-on-one talks along with talks amongst others with similar issues have their benefits for each client.

“Group counseling is great because it’s a group of peers, with a counselor facilitating keeping everything in line, but that peer-to-peer support and advice, them calling each other out in a safe place, it’s really important,” she said. “Individual sessions tend to be more individually goal-based focused. When someone comes into treatment they initially get an assessment and get recommended for treatment. We bring them in and create a treatment plan.

“We’re not session based, we’re goal based. It’s not ‘Hey, you came to treatment for 12 sessions and now you’re done. It’s you’re identifying needs you have, goals in relation to those needs and it’s about them reaching those personal goals.”

With Pahrump being a smaller town, people come to know one another, especially ones who have addiction issues like themselves, which can sometimes create problems in group settings.

“A lot of the people that come here have known each other from their past, so it can make it kind of uncomfortable at times for them to really open up in a group session. So in an individual session they have more of that one-on-one and you get a better feel for who they are.”

The bulk of their patients are appointed by the court, due to them being in some sort of legal trouble revolving around drugs or alcohol.

“We also do the treatment for the drug court program, Nye County Adult Drug Court,” she said. “We do random drug testing to our outpatient clients. Drug court also does their own testing.”

For those clients who might need services the in-house counselor can’t offer them, like mental health issues, WestCare utilizes technology to connect them to someone in their Las Vegas offices to get them the help they are seeking.

“We offer the Telehealth, which is a wonderful component,” Jones said. “It helps people that are dealing with substance abuse and also have a mental health condition. It’s kinda like the chicken or the egg, which came first?

“There is a lot of self-medication going. People are dealing with these symptoms, so they’re using, which can just make things worse on both ends.”

The Telehealth system also comes in handy dealing with inmates. WestCare can utilize the video conferencing system to care for inmates who need help, without actually having to step foot in the Nye County Detention Center.

“We have equipment at the local jail,” said Arturo Gonzalez, assistant director at WestCare. “So instead of our staff going to the jail to get a client assessed for residential, we do it all over the TeleHealth as well, so it’s just a win-win situation.”

In addition, Telehealth also makes covering other areas of the county easier, as they can bring any care a client needs to them, without actually having to make the trip to where they are living.

“Another good example is, say a Tonopah counselor has a patient who is searching for substance abuse treatment, we can assess that client and not have to travel.”

Going off proven methods is something that WestCare is big on, as having proof that a certain treatment or program actually has yielded positive results makes both sides all the more confident.

“We use evidence-based curriculums.” Jones said. “A lot of the same type of stuff, it’s cognitive behavior therapy, we’re trying to help these people kind of change the way they’ve been thinking, so that they make better choices.”

Unfortunately for some, making those better decisions doesn’t come with one round of treatment, as some require more sessions at the facility.

“That’s not necessarily a bad thing,” Jones said. “I think the average is seven to 10 treatment episodes before someone finally gets it. But anytime they’re here and that they’re asking for help and reaching out is a good thing.”

Although Jones and the WestCare facility here see a variety of substances that are abused, there are ones that stand out over the rest.

“When I first started, meth was huge and it’s still huge and heroin is big now,” she said. “Pills were big, but they got expensive so people turned to heroin … Heroin and meth are usually the big ones.”

Marijuana is also a big one that clients are abusing, and those patients usually don’t take their addiction as serious as those addicted to harder drugs.

“People who are addicted to marijuana usually love marijuana,” Jones said. “They can get in trouble for it, but they really don’t think it’s a problem. Sometimes it’s hard because they don’t want to admit that, ‘Hey, yeah I am using this every day and I can’t stop. It caused me problems in my relationship’.”

If you or anyone you know need help with substance abuse problems or mental health issues give WestCare a call at 775-751-6990.