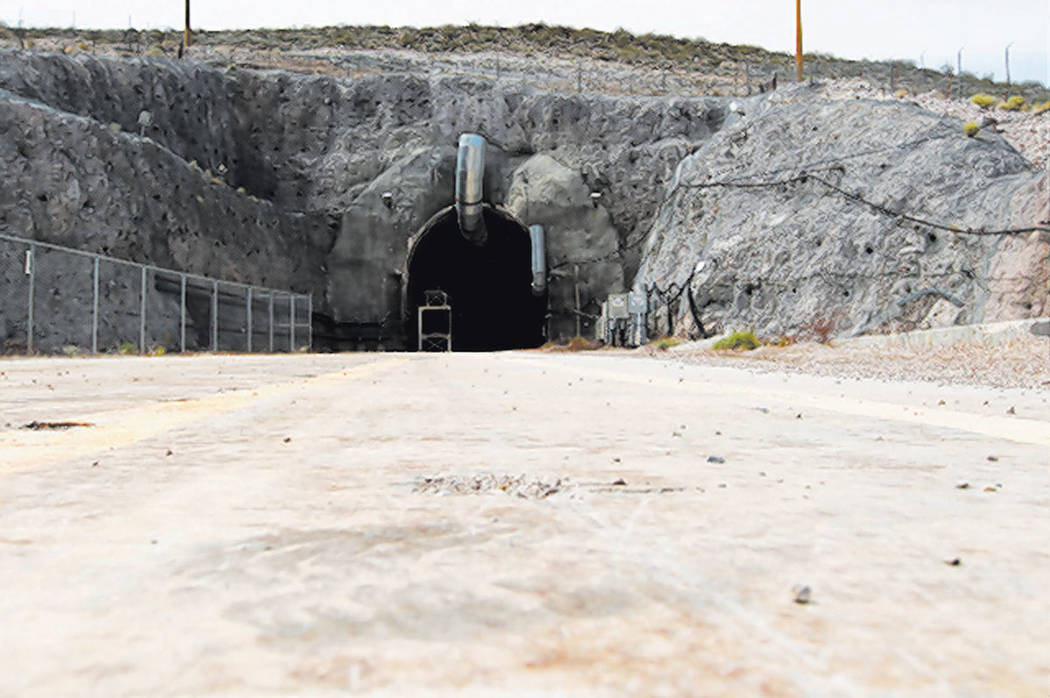 WASHINGTON — Leading Democratic presidential candidates in the Nevada caucuses opposed building the Yucca Mountain nuclear waste repository in the state where a majority of residents oppose it.

And President Donald Trump’s recent reversal on the issue may take it off the table in the general election this fall, when Nevada, a swing state with six electoral votes, is expected to be in play.

But White House hopefuls must still pay lip service to an issue that resonates with voters concerned about a three-decade-old federal law that declared Yucca Mountain as the site for permanent disposal of nuclear waste from power plants.

Obama was elected and slashed funding for licensing hearings on the project, started under President George W. Bush.

Reid said this month that the Yucca Mountain project was mortally wounded despite Trump’s election-year policy reversal on reviving licensing for the project.

“I’m finally glad he’s seen the light,” Reid said following Trump’s recent tweet that he would no longer propose funding for the project after Congress rejected it during the past three years.

Nevada has opposed the Department of Energy’s application to build a repository for 110,000 metric tons of nuclear waste just 90 miles northwest of Las Vegas, in Nye County, and like Reid, current officeholders used the caucuses to force loyalty to their cause.

If a candidate wanted to win in Nevada, Cortez Masto told the Review-Journal during an interview in December 2018, “they are going to have to be against Yucca Mountain.”

Cortez Masto has filed a bill in the Senate that would require Nevada’s consent for final approval to build a permanent repository in Nevada.

While he was in the Senate, Joe Biden voted in 1987 with a bipartisan majority to pass an omnibus spending bill that approved the Nuclear Waste Policy Amendments Act that designated Yucca Mountain as the nation’s permanent repository for radioactive waste, according to Senate vote records.

The bill passed, 61-28. Reid was one of the senators who voted against the bill.

But since then, Biden served as vice president in the Obama administration, which slashed funding for licensing procedures that began under the Bush administration.

President George W. Bush won elections in 2000 and 2004 without announcing opposition to Yucca Mountain, though Reid said the president lied about his intentions not to advance the repository.

After Obama won the presidency, his administration moved to kill funding for the licensing hearings on the DOE application to build the facility, withdrawing the federal funds that shelved the process in 2012.

Licensing needed for a permit to construct a repository for a permanent storage facility was largely dead, until Trump began efforts in his first year in office to restart the licensing process.

Each year since his election, Trump has requested $120 million to restart licensing stopped under Obama.

Those requests were rejected by the House and Senate, delivering a defeat to the Trump administration and angering lawmakers with power plants and growing stockpiles of nuclear waste who want the federal government to follow the law, accept the waste and dispose of it at Yucca Mountain.

Several lawmakers said they would continue to push Trump to “finish Yucca Mountain.”

That may come after the 2020 election.

Energy Undersecretary Mark Menezes told a House subcommittee last month that Trump was frustrated that “we have not been able to get the resources of authorization that we need to license Yucca.”

Instead, he has requested $27.5 million for “exploring innovative approaches for storing long-term waste.”

Menezes said Trump has proposed alternative approaches to nuclear waste storage, largely looking toward interim storage facility sites in other states, which would also require Congress to change the 1987 law.

South Carolina has 4,500 tons of spent nuclear fuel and waste being stockpiled at facilities in that state, according to Duncan, who has noted that while Yucca Mountain is a sensitive political issue in Nevada, the proposed site is on federal property.

Menezes told Congress the president was hopeful that an interagency process working with states “to find a way forward on this” would eventually include Yucca Mountain, which is designated by law as the site for permanent storage of nuclear waste.

The undersecretary also told Congress that the federal government was bound by law to develop Yucca Mountain, and that lawmakers would have to change law to allow temporary storage at other sites, particularly those run by private companies.

Not surprisingly, Silver State officials, Republicans and Democrats alike, are wary of the president’s election-year conversion on Yucca Mountain in Nevada.

Nevada Gov. Steve Sisolak, a Democrat, hand-delivered a letter to Trump at the White House this month urging the president to veto any congressional bills that include Yucca Mountain as a final solution on permanent waste storage without the state’s consent.