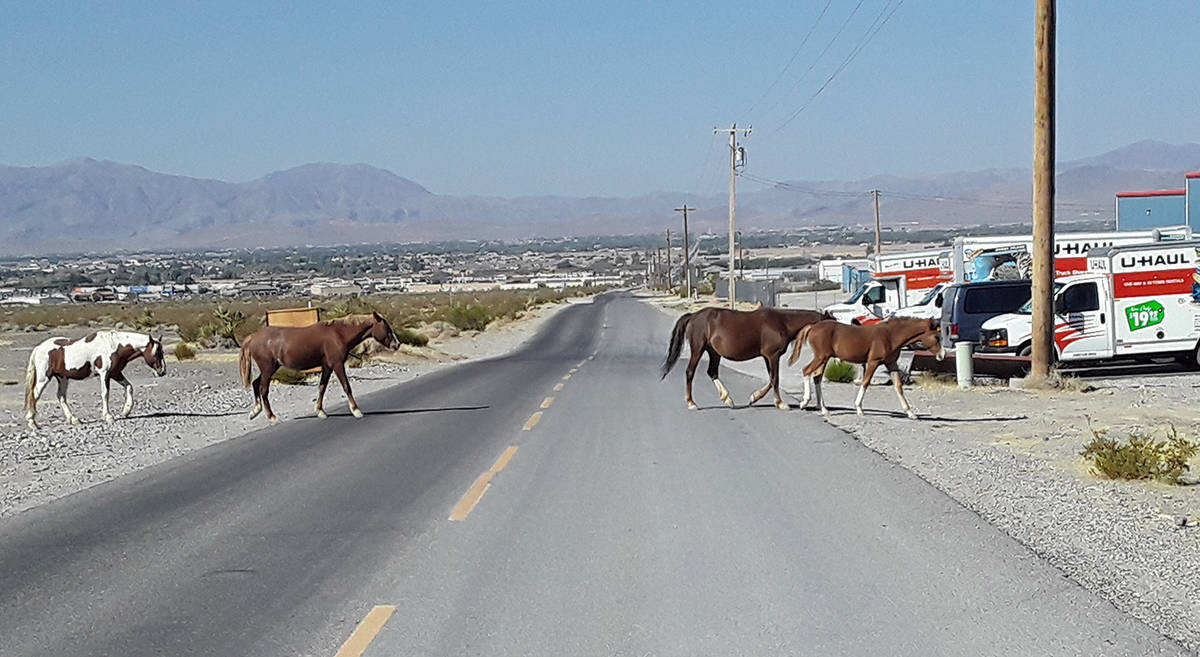 Selwyn Harris/Pahrump Valley Times A small herd of wild horses cross East Basin Avenue in search of favorable grazing grounds. Last week a horse was euthanized after being struck by a vehicle along Gamebird Road.

A Nye County Sheriff’s Office Animal Control officer was forced to euthanize a wild horse after the animal was struck by a vehicle on Thursday evening, March 18.

The incident occurred on Gamebird Road, near Malibou Avenue.

None of the occupants in the vehicle were seriously injured.

As a result of the circumstance, Bureau of Land Management Field Staff Ranger Ryan Gallagher said motorists should be on extra alert, especially when driving in the evening hours.

“On that stretch of road, the speed limit is 55 miles per hour and I think it’s incredibly easy to overdrive your headlights,” he said. “There’s several dark colored bays and black burros on that end of town. A little bit of eye-shine is all you get and it’s probably too late by then. That portion of roadway is completely within town for the most part, so it’s also hard to get people to be aware of wild horses and burros when they think they are driving in residential and commercial areas.”

For many years Nye County Animal Control officers have been dispatched to shoo the equines away from Highway 160 when they travel from the foothills, to graze in greener pastures in town.

As of late, the horses’ preferred choice has been the Calvada Eye, according to officer Levi Gregory, who also warned drivers to always remain vigilant.

“All we try to do is keep them off of the highway and get them where they can safely graze,” Gregory noted. “I’d like to see them out in the desert area to graze, but they seem to want to come in closer and cross the highway, and obviously it’s not good for them or the motorists.”

Aside from better grazing conditions closer into town, Gallagher noted that the animals are attracted to people who feed them, which at times, can remove the natural fear of humans.

As such, individuals can be cited and fined up to $500 for feeding the wild horses.

Earlier this month, BLM officials removed three wild horses from the Calvada Eye and transported them to a facility in Ridgecrest, California where they will be medically evaluated and eventually be put up for adoption.

For additional information on adopting a wild horse or burro, log onto https://www.blm.gov/whb