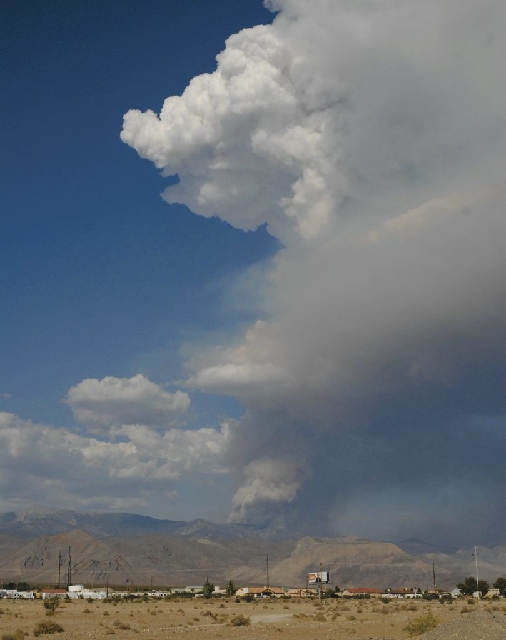 A lightning strike is reportedly behind the wildfire that started in Carpenter Canyon this week and spewed smoke across the valley.

The Bureau of Land Management reported the fire around noon on Monday after lightning struck a steep terrain area south of Carpenter Canyon and just north of Trout Canyon with no direct access.

Though the fire first covered only about a 10th of an acre, by Tuesday evening it had grown to more than 200 acres, and then bloomed to more than 1,800 acres later that night in part due to high temperatures and winds.

By early Wednesday afternoon, the BLM reported the fire had shrunk slightly to an area measuring 1,100 acres, or 700 less than the night before.

A large column of smoke was visible in Pahrump earlier this week as fire crews worked to stop the flames and get the fire under control. As of Wednesday, BLM officials reported that large column, however, had dissipated.

BLM officials said the blaze is being fueled by pinyon-juniper trees in the area. As of Wednesday none of the fire had been contained.

There are approximately 120 people working to contain the wildfire with resources including five engines, one Hotshot Crew, overhead resources, one law enforcement officer and a type three helicopter.

The U.S. Forest Service has reportedly made those residents aware, however, of their “trigger points,” or situations in which fire crews would ask them to leave for their own safety.

Trout Canyon Road was closed as the fire continued to burn. BLM officials are suggesting anyone sensitive to smoke remain indoors if possible or take extra precautions when venturing outside.

In light of the dry and windy conditions that helped the Carpenter Canyon fire grow, BLM officials would like to remind the public that fire restrictions are currently in place and it is unlawful to build or use a campfire or charcoal stove (using portable stove using gas, jellied petroleum or pressurized liquid fuel is acceptable), weld or operate an acetylene torch with open flames (except by permit), use any explosive (except by permit), use fireworks or fire a tracer or operate an off-road vehicle without a spark arrestor.

The wildfire started as fire officials across the Southwest mourned the loss of 19 members of the Granite Mountain Hotshot Crew stationed in Prescott, Ariz. The crew perished while fighting the 2,000-acre Yarnell Hill fire that ignited Friday south of Prescott. The tragedy was a stark reminder of the dangers posed by wildfires.