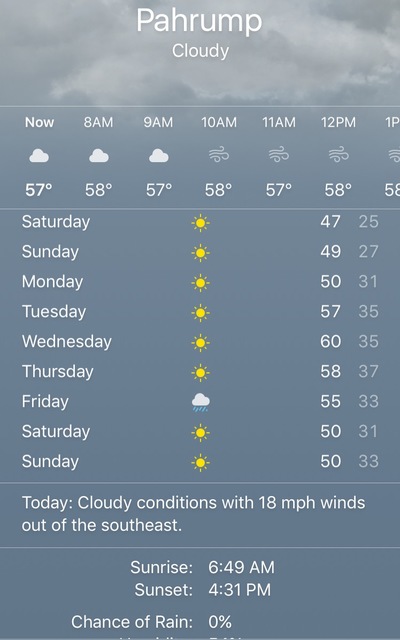 The week will end on a breezy and maybe soggy note, as a storm will linger over from Thursday night.

The National Weather Service said that there is a shot at some precipitation and high enough wind speeds to issue an advisory.

“The main thing Friday is that there’s a wind advisory in effect,” said Jim Harrison, National Weather Service meteorologist. “Southwest winds will be 24-to-25 mph, with gusts as high as 45 mph.”

Aside from the gusty winds, there is also a 40 percent chance of rain today, with the best shot for precipitation before 11 a.m.

A strong cold front is responsible for the inclement weather, as there will be a big drop in temperatures over the weekend.

Saturday and Sunday will top out at 48 degrees and 50 degrees respectively, representing a 10-to-12-degree drop from Friday’s high temperature of 60 degrees.

Subfreezing overnight lows will also accompany the cold front, as the lows will dip down to 24 degrees Saturday, 28 degrees Sunday and 29 Monday, before breaching the freezing mark on Tuesday with a low of 33 degrees expected.

The high temperatures will get back to the normal of 55 degrees for this time of year starting Tuesday, as a high of 56 degrees is expected, with sunny conditions.

Wednesday will reach 58 degrees before falling to 55 degrees for the high on Thursday.