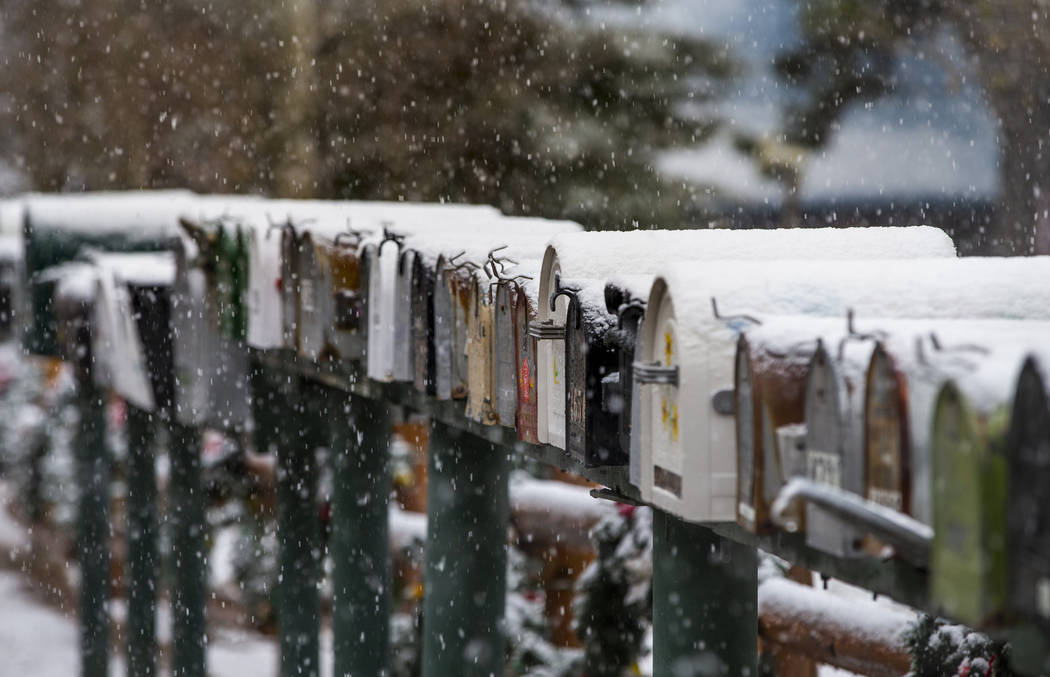 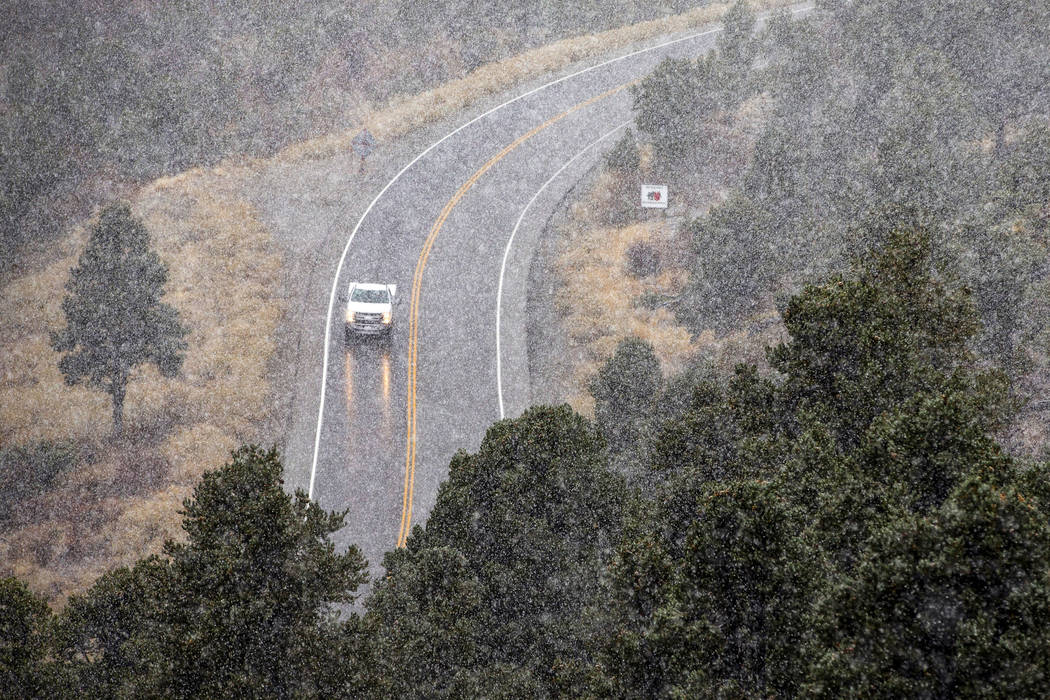 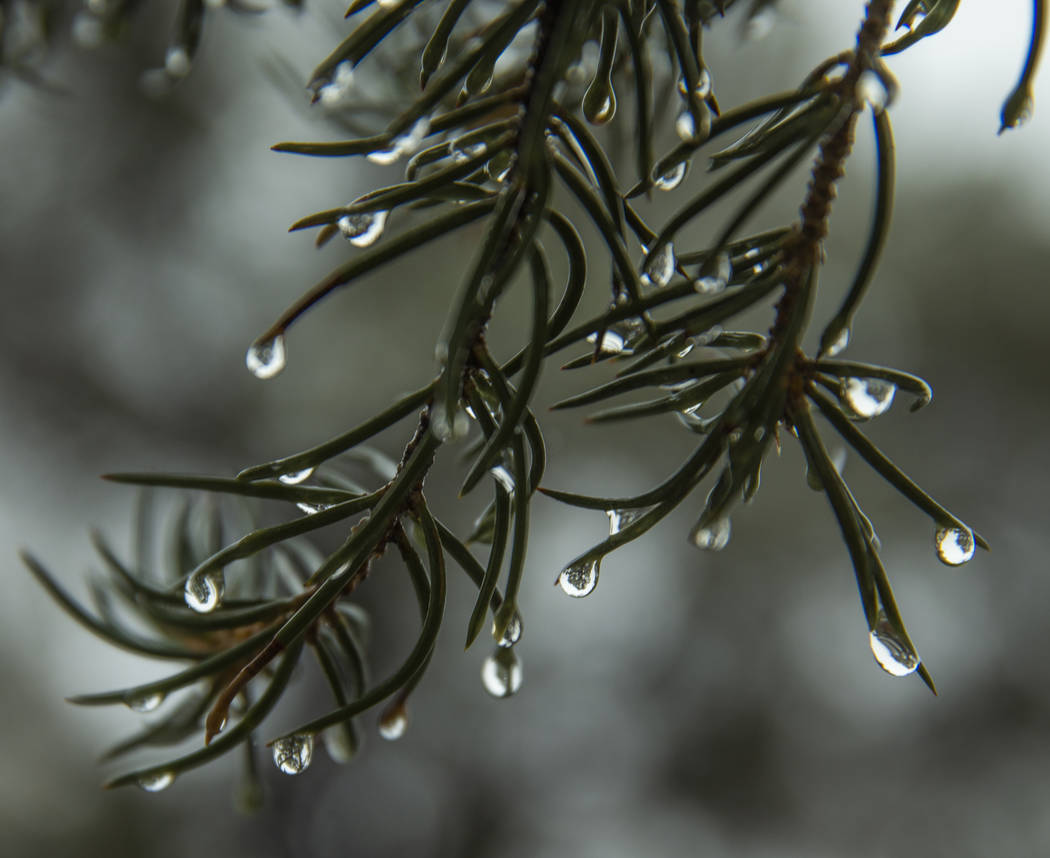 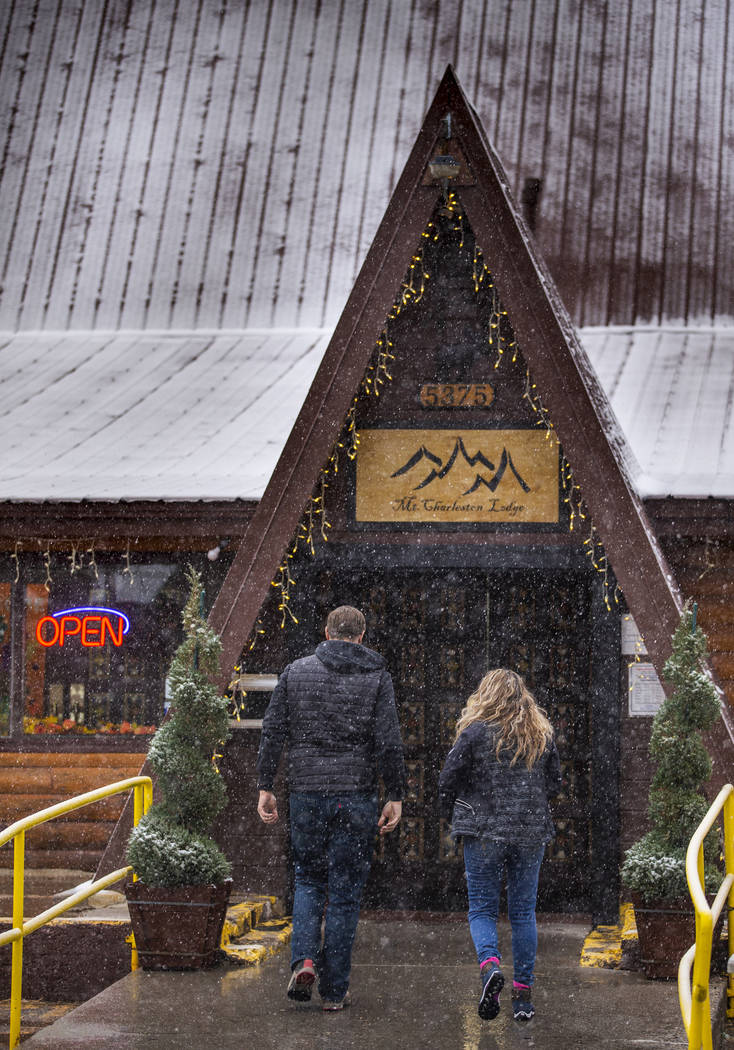 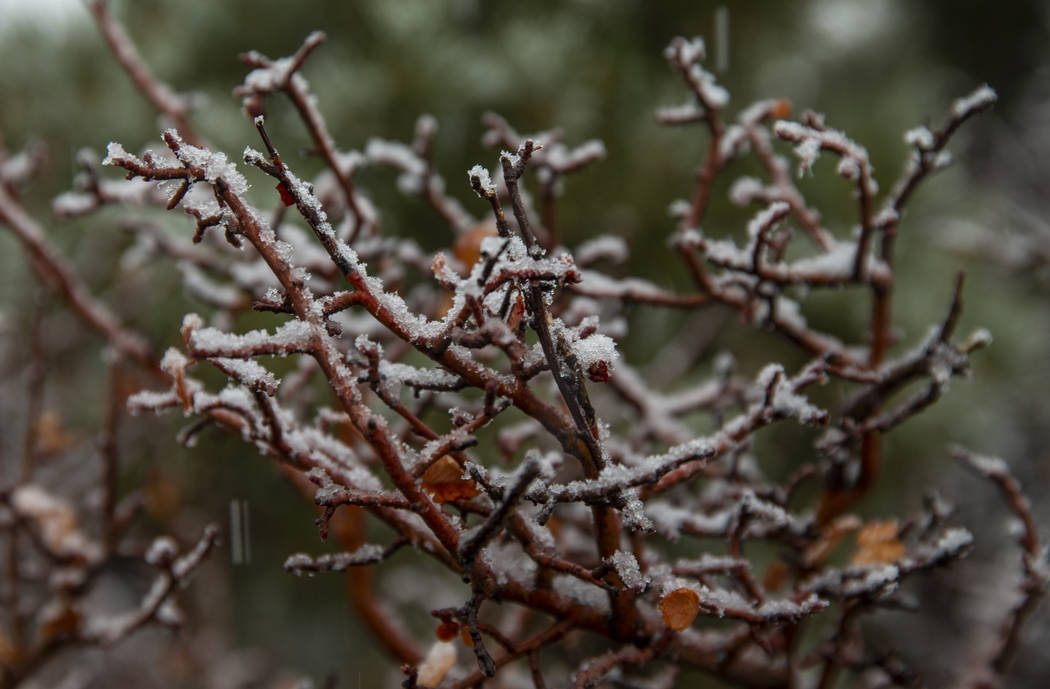 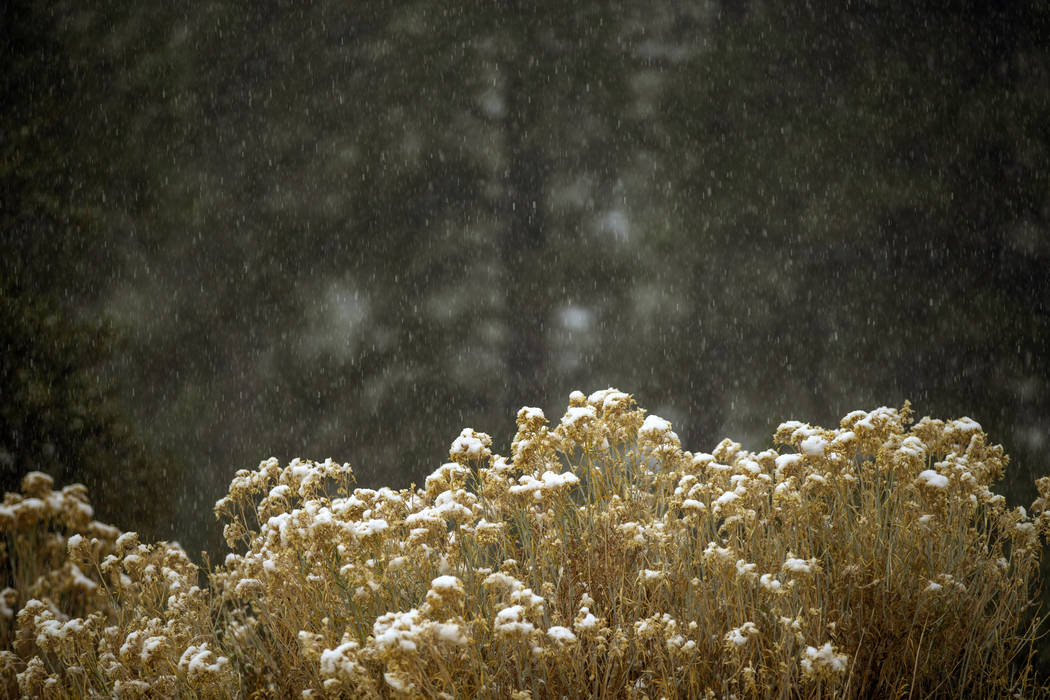 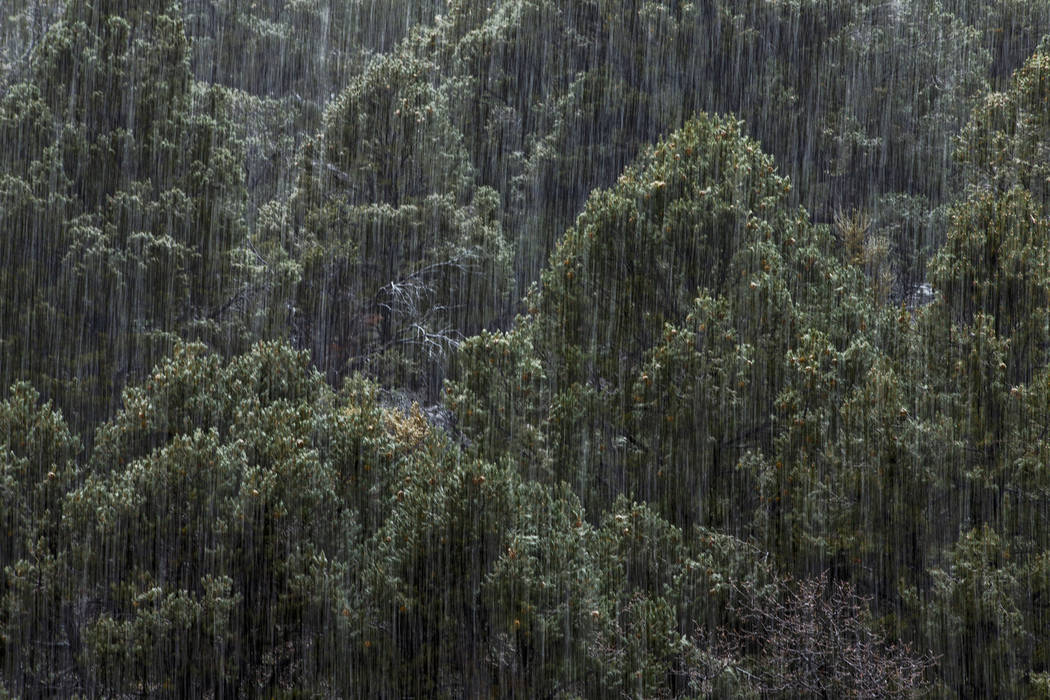 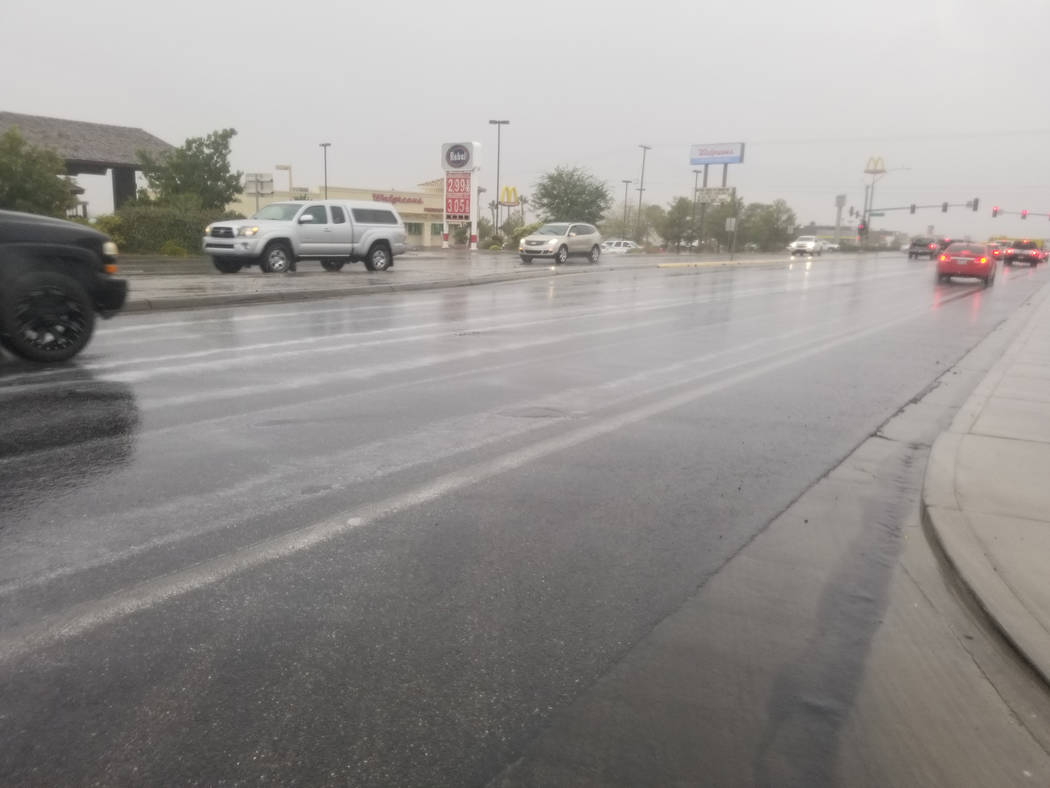 Snow fell in the Spring Mountains on Wednesday as a storm brought rain to Southern Nevada, leading to a power outage in the Pahrump area.

Pahrump-based Valley Electric Association Inc. reported on Wednesday that approximately 700 members were without power for roughly two and a half hours due to rain in the area of Wilson Road, between Leslie Street and Blagg Road. Some broadband customers were affected during the outage.

The next day, the VEA reported via Facebook that about 1,400 Pahrump customers were affected by a power outage at 7:30 a.m. Thursday in areas north of Basin Avenue between North Woodchips Road to Justin Lane. “The cause of the outage was an insulator failure, which resulted in a small fire. Repairs should take from 30 minutes to an hour,” the statement read. Power was restored about 8:35 a.m. Thursday, the VEA added.

In a Twitter post on Thursday morning, Clark County government reported that Kyle Canyon had received about 7 inches of snow and Lee Canyon got 7-10 inches in the last 24 hours,

“It’s going to be a white Thanksgiving” at Mount Charleston the tweet read.

The National Weather Service issued a winter storm warning for Mount Charleston and the Sheep Range until 4 p.m. Thursday.

“Heavy snow above 6,000 feet,” the weather service said in its statement. “Total snow accumulations of 10 to 18 inches in the Spring Mountains and Sheep Range with 5 to 10 inches in the Sierra and White Mountains. The heaviest amounts are expected above 7,500 feet. Winds gusting as high as 35 mph.”

The visitor gateway for the Spring Mountains National Recreation Area, at 2525 Kyle Canyon Road, was to be closed Wednesday and Thursday because of the storm, according to Clark County officials. It was expected to reopen today, Friday, Nov. 22.

The weather service had said that snow could be heavy at times Wednesday afternoon with an accumulation of 4 to 8 inches. Highs were predicted to be 41 to 44 degrees at Mount Charleston.

In a Facebook post, Lee Canyon ski resort said that it had received about one-inch of snow Tuesday night and another 2-3 Wednesday morning.

“Not enough to open but heavy and perfect for base building, keeping us right on track for early December opening,” the post read. “Expecting snow throughout the day and into tomorrow (Thursday)… The ski resort is still closed to the public and active construction is underway.”

Snow also was on the ground in the historic Nye County community of Tonopah and Goldfield in neighboring Esmeralda County. The snow closed schools in Tonopah on Thursday.

— The Pahrump Valley Times staff contributed to this report