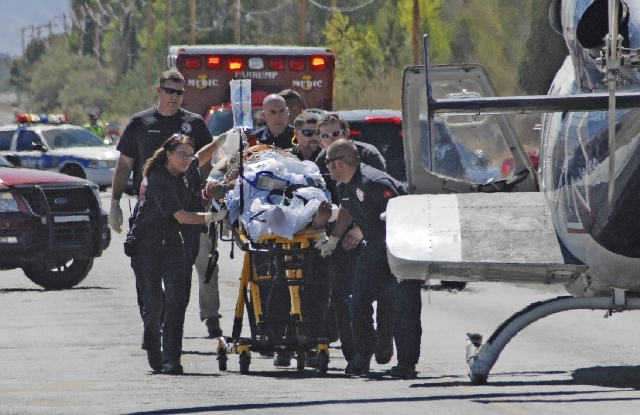 Jurors heard opening arguments Tuesday in the case of a 2012 shootout between two Nye County Sheriff’s deputies and a biker outside a home on Manse Road.

Edward Garza appeared before the court on charges of attempted murder with use of a deadly weapon, assault with a deadly weapon, aiming a firearm at a human being or discharging a firearm where a person might be endangered and carrying a concealed weapon following a June 30, 2012 incident in the front yard of his 4790 E. Manse Road home.

The day of the incident police were reportedly asked to respond to a domestic disturbance with possible shots fired after a woman ran to the Mountain Falls clubhouse telling a bartender she and her friend had been walking up to a nearby house when shots were fired from within.

NCSO Deputy Summer Dannecker was first to arrive at the residence where she met with Garza and his significant other near a gate to the driveway of the property.

Garza, a member of the Hessians Motorcycle Club, was reportedly sitting in a chair near the gate with two guns by his feet when the officer began speaking with his girlfriend.

Less than a minute after she arrived at the location, a second officer, Deputy Wesley Fancher, arrived on scene as well.

The two officers asked to see Garza’s hands, at which time he allegedly picked up one of the two guns by his feet and began to stand up.

Fancher subsequently fired at Garza and the defendant began firing back at deputies.

A shootout commenced and the episode ended with Garza shot twice — once in his shoulder and once in his abdomen.

He was later flown by Mercy Air to the trauma center at University Medical Center in Las Vegas. He was later arrested in the case and transported to the Nye County Detention Center where he has remained in custody since.

During the state’s opening arguments, Chief Deputy District Attorney Kirk Vitto told jurors had Garza listened to police commands, instead of picking up his gun, they wouldn’t be at the trial.

“Steve Geroge (the Mountain Falls bartender) knew what to do, medical knew what to do, the fire chief knew what to do, he staged the landing zone for the flight crew, the deputies knew what to do. Everybody knew what to do and did it, except for the defendant. His choice to not do what he knew he was supposed to do is why you’re here, giving you the opportunity to do what you are supposed to do, which is to listen to the evidence, match the facts to the law and apply common sense to what the prosecution will show beyond a reasonable doubt,” the county prosecutor told the jury. “Law enforcement responded in a protective capacity, they had a professional and moral obligation to ascertain the welfare and safety of the person involved based upon the information they had. Shots fired? Blood? Scared? Someone dead? The defendant created a situation necessitating the involvement of law enforcement. Thereafter he created a situation necessitating a display of force and exchange of gunfire. You will, based on the evidence, see all he had to do was leave his gun on the ground.

“He chose to pick it up … Deputy Fancher had a split second call to make while standing there with a gun pointed at him.”

Vitto continued by asking the jury to weigh whether it was okay to ignore police commands.

“Is it OK to disregard a directive of law enforcement in a situation like that, based on the evidence of the situation, much of which is undisputed? If it is OK, you get to let the defendant go, find him not guilty. If it’s OK he deserves to walk out that door. Bottom line you will hear, based on the evidence, law enforcement had the right to be where they were, doing what they were lawfully obligated to do. The evidence will show we are here, not because of law enforcement, but because of the choices (Garza) made,” he added.

Garza’s defense attorney, Jason Earnest, told jurors his client was simply acting in self-defense when he fired his gun.

Earnest says at that moment Garza panicked — “He’s now in the fight for his life.”

“That’s it. That’s it. That’s what this trial is about. The state is going to try and convince you he was trying to kill a cop. They have to prove that beyond a reasonable doubt. They can’t,” the defense attorney said.

With opening arguments finished, the state began its case, calling multiple witnesses, including sheriff’s dispatchers on duty the day of the incident and an EMS responder to the stand to testify about what they heard and saw the day of the shooting.

The trial was scheduled to continue today with further testimony from more of the state’s witnesses. Once the state rests, it will be the defense’s turn to present their case to the jurors or simply rest.