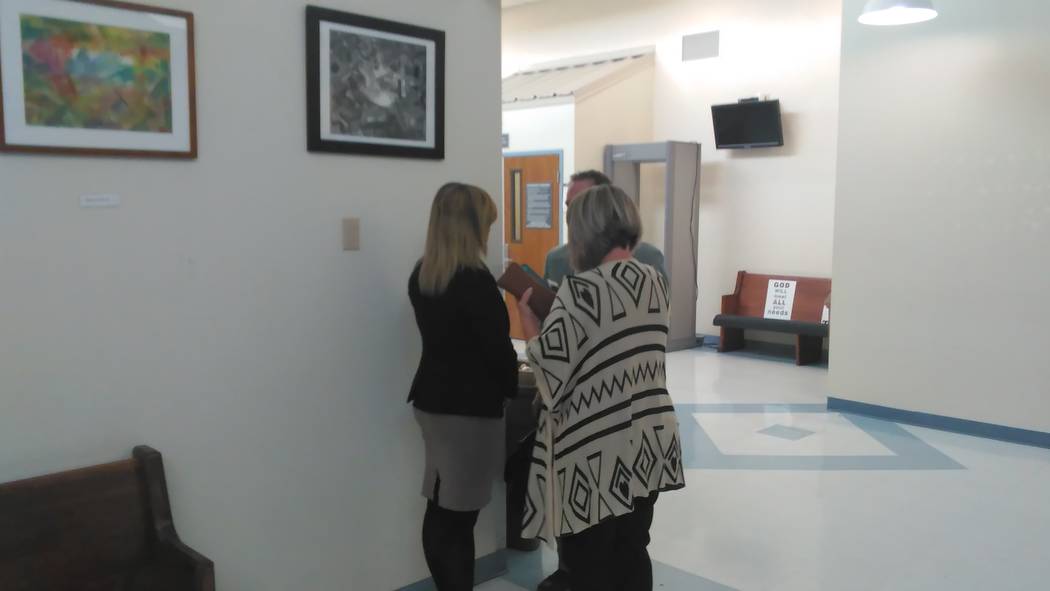 The lawyer for Ashley Winn, the woman charged in a fatal DUI crash entered a not guilty plea on behalf of his client during a Monday morning arraignment hearing.

Attorney Thomas Gibson also requested a change of venue for the proceedings, scheduled to begin in late July.

He told Fifth District Court Judge Robert Lane that either Tonopah or Goldfield would be suitable.

Family and friends were clad in orange clothing in support of Christine Weir, 33, who prosecutors said was killed by Winn following an early morning collision last September.

Following the hearing, Weir’s father Jim, and aunt, Carol Weir-Spooner, questioned the length of time it’s taking to see justice for her niece.

Both traveled from Southern California to attend the hearing, which took just over three minutes.

“It has been almost six months since she killed my niece and she hasn’t spent more than two hours in jail,” Weir’s aunt said. “The case is so black and white, and there’s no reason why they have to drag this out, but the justice system is the justice system. I just want to see justice done and I wish it didn’t have to take them close to a year to do it.”

Weir’s father said the entire ordeal is taking a toll on his family.

“It is really a tough time for the whole family,” he said. “The dragging out of the justice system is terrible. Nobody else’s kid needs to die from the stupidity of a person who chooses to drink and drive. My daughter never had a drink in her life. To die that way is just a terrible thing. I just hope she learns something from this. I just hope she doesn’t kill somebody else before they put her in.”

On Sept. 24, 2016, Nye County Sheriff’s deputies responded to the area of Dandelion and Honeysuckle streets after dispatchers received reports of a motor vehicle collision.

Weir and the driver, Brian Choiniere, 33, were northbound on Honeysuckle Street at the time of the fatal collision.

A sheriff’s office press release stated that Winn failed to stop at the stop sign and broadsided the vehicle on Dandelion Street.

Weir was pronounced dead at the scene, while Choiniere was airlifted to University Medical Center in Las Vegas.

Weir, a receiving clerk at Walmart, was on her way to work at the time of the collision.

The Nevada Highway Patrol responded to the scene to assist sheriff’s deputies and took over the fatal motor vehicle accident portion of the investigation.

That investigation ultimately identified that Winn was intoxicated and was the at-fault vehicle in the accident, as a result of running the stop sign.

According to the NHP, Winn admitted that she had been drinking whiskey up to one hour before the crash.

Michael Vieta-Kabell is prosecuting the case against Winn.