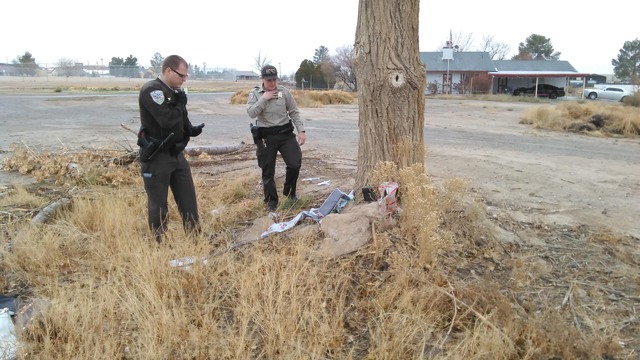 Nye County Sheriff’s deputies look where several apparent Christmas gifts as well as purses containing credit cards were discovered underneath a tree at Discovery Park on Dec. 22. The sheriff’s office is investigating the find and attempting to locate the owners of the items. Selwyn Harris/Pahrump Valley Times

A woman out on a morning walk made a surprising discovery in her neighborhood last Thursday.

The woman, while walking along a section of Discovery Park, happened upon several packages partially wrapped in Christmas gift-wrapping paper underneath a tree.

Several purses were also strewn about the area on Happy Canyon Road.

Retired veteran Jerry Coker said he called the sheriff’s office after his wife told him about the discovery.

“We live on Happy Canyon and my wife took our dog for a walk,” he said. “The dog happened upon three purses that contained two credit cards. She came back home and told me about it, and then we got on the phone and contacted the sheriff’s department.”

Coker also said his wife walks that same area each day, but she did not see the items there the day prior.

“We think that it probably happened during the overnight hours because she makes the same walk every day,” he said. “It’s pretty sad when people do stuff like this and it makes it even worse during the holiday season. Somebody’s stuff was just dumped all over the place and they don’t even know yet. It’s very sad when some people think they need to resort to this in order to get by.”

Anyone with information regarding the matter is urged to call the sheriff’s office at 775 751-7000.