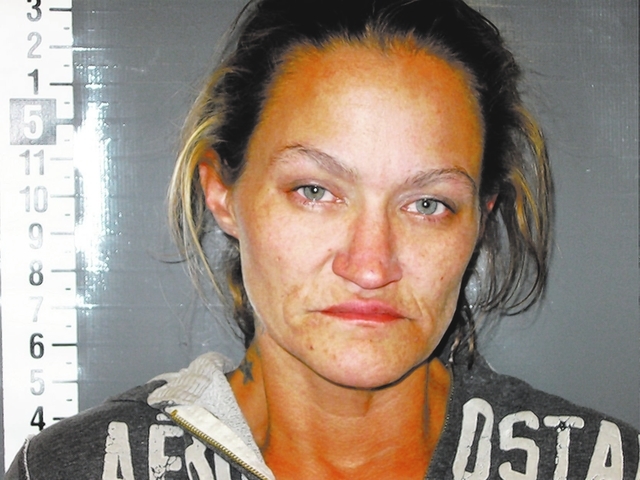 A woman arrested earlier this year for allegedly stealing several items from a truck parked outside a local retailer and later found in possession of private information belonging to as many as 80 other individuals has pled guilty in the case to a felony charge of burglary.

Melissa Marie Caruso, 33, appeared in District Court on Dec. 20 to be arraigned on a single charge of burglary, a category B felony.

Caruso was first arrested after Nye County Sheriff’s Office deputies were called on Oct. 29 to respond to the Walmart parking lot on State Route 160 for a report of a purse, backpack and several other items that had been stolen out of the victim’s truck.

Although Caruso had left by the time police arrived on scene, an investigating deputy was called back to the retailer the following day after employees stated a vehicle matching the one Caruso had left in was back on the property.

When police made contact with the woman, she allegedly admitted to stealing from the truck and agreed to take police to a dumpster and her home where she had taken the items.

The stolen purse and backpack were recovered and when police gained consent to search Caruso and her vehicle, they allegedly found eight pieces of sealed mail with other individuals’ names on them in Caruso’s vehicle as well as six credit cards with other people’s names on them.

Investigators also allegedly found hundreds of pieces of personal property belonging to others including mail, bank statements and credit cards in Caruso’s home.

During an arraignment hearing earlier this month, Caruso plead guilty and agreed to pay any ordered restitution and to be evaluated for the Fifth Judicial Drug Court program in exchange for the District Attorney’s office to not pursue any other charges arising from this incident. When asked how she wished to plead, Caruso told the court she was “absolutely guilty.”

Both Caruso’s defense attorney Jason Earnest and prosecutor Patrick Ferguson asked Judge Kimberly Wanker to release the woman from custody on her own recognizance.

Before Wanker would consider letting the woman out of custody, however, she asked if Caruso had a drug problem, to which Caruso replied she had issues with methamphetamine.

Wanker ordered Caruso be released from custody, with the condition she immediately go to the Drug Court office and be evaluated for enrollment in the program before sentencing.

Caruso is scheduled to be back in court on March 28, 2014 for sentencing.