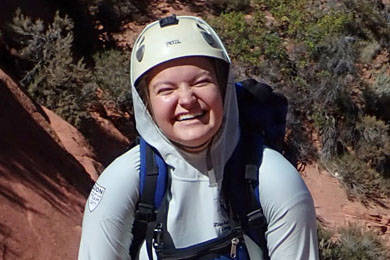 Authorities on Tuesday identified a canyoneer who died from a Saturday fall at Zion National Park as Cassidy Brown, 26, of Springdale, Utah.

Park visitors reported that Brown had fallen about 50 to 80 feet while canyoneering in the area of Mystery Canyon, which is about a mile and a half north of the popular Angels Landing Trail, according to a news release from the National Park Service. Canyoneering is an activity that combines rappelling, swimming and hiking.

A search and rescue effort started Saturday afternoon, the park service said. A rescue helicopter was sent out but was unable to reach the woman because of the canyon’s steep, narrow walls, according to the release.

“I was lucky enough to have her as my main adventure partner for a couple years,” Jones said. “That was a good run, and she was always an awesome companion.”

A thread on Canyon Collective honoring Brown’s memory generated multiple responses from climbers, hikers and canyoneers who praised Brown as a kindhearted, caring person who worked at the Zion Adventure Company in Springdale. The company did not immediately respond to a request for comment. Its website listed her as a guide and outfitter.

On Facebook, poster Rich Rudow said of Brown: “One of the brightest stars in the galaxy has gone dark.”

“Having gained her canyoning skills in the sandstone slots of Zion National Park, she always brought a valued and skilled perspective to the limestone slots of the Grand Canyon,” Rudow wrote. “She was a masterful practitioner in the art of canyoning.”

The National Park Service did not release any further information on the tragedy. The lead agency on the case, the Washington County Sheriff’s Office, said an investigation is ongoing. Foul play is not suspected.