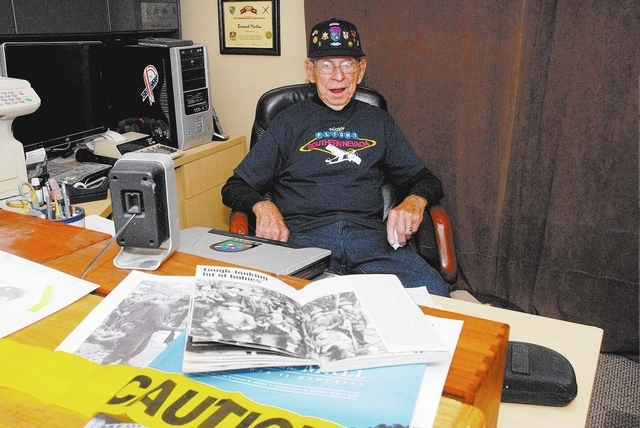 Pahrump resident Bernard Martin, 91, braved rain and the government shutdown to visit the National World War II Memorial in Washington, D.C. last weekend with 35 other veterans as part of the Honor Flight of Southern Nevada.

The trip drew national publicity, as barricades were removed, enabling the veterans to visit the memorial despite the government shutdown that began Oct. 1. Martin said the reception at both ends of the trip was almost overwhelming for the elderly passengers.

“When we got to Washington, D.C., we couldn’t believe the amount of people that met us there. It was tremendous and I would say about 400 people were thanking us for our service, shaking our hands, we could hardly walk through the terminal to get to the buses waiting for us,” Martin said. “I couldn’t believe that all of this was for me. Women were hugging us, shaking our hands.”

Last Friday the World War II vets flew from Las Vegas to the nation’s capital where they were transported from the airport to their hotel, feted at a banquet dinner and went to bed. The next day they toured the World War II Memorial. They tried to visit other sites, like the Jefferson Monument, the Washington Monument, the Iwo Jima statue at the Marine Corps Memorial, the Air Force Memorial, the Navy Memorial, the Korean War Memorial, the Vietnam Memorial and others, but for many they had to be content to view them from their seats on the bus due to the shutdown.

But they were able to march into the World War II Monument with the same determination that helped win the war.

“The fences were there but they were removed just before we got there,” Martin said. “Then the guards put tape around but we cut the tape and we went in anyway. In fact, I have a piece of the tape. The guards didn’t do anything, they just stepped off to one side while we went in.”

The World War II Monument has a star for every 100 people that were killed in that conflict, which claimed 405,000 lives. It contains 56 pillars, victory arches and a fountain, built from donations raised by veterans’ groups over a decade. It opened in 2004. It had been open until the government shutdown — that is before the veterans started removing the barricades.

“The World War II Monument was really, really impressive, I couldn’t believe the fantastic size of the monument,” Martin said. But he added, “The best thing we saw was the changing of the guards at the Tomb of the Unknown Soldier. It was awesome. The guy walks about 65 feet from one end to another on the rubber mat. He’s just like a robot. He doesn’t smile, he doesn’t flicker and he’s dressed impeccably.”

Martin was a resident of Rhode Island who joined the National Guard out of high school, which was then converted into the U.S. Army. He served with U.S. Army commandos from 1940 to 1947. From 1943 to 1944 he served with Merrill’s Marauders in China, Burma and India as a combat radio operator. It was a regiment-sized unit trained for long range penetration of Japanese lines named after their commanding officer, Brig. Gen. Frank Merrill. For their efforts, each soldier in the unit was awarded a Bronze Star.

He added, “I was lucky, every time I saw a bullet come I ducked it. I was very fortunate, bullets were all around me, not one had my name on it.”

Martin dodged fate again at the end of the war; he contracted Japanese typhoon fever, which he said had a fatality rate of 90 percent. He survived it, though he was hospitalized for a year.

Martin is one of a dying breed. He said World War II veterans are dying at the rate of 800 per day.

Upon his return to the U.S. after the war, Martin studied to be a construction engineer in Florida using his veterans’ benefits. He got his contractor’s license and started building houses. During his last move two years ago, he left San Diego because of the high cost of living and settled for life in Pahrump.

“Welcome to your tour of honor! It’s going to be a long couple of days, but we hope it will be a visit you will never forget,” reads the top of the itinerary from Honor Flight Southern Nevada. “This is our tribute to you for all of the sacrifices you’ve endured so the rest of us can live free.”

Martin complimented the Honor Flight people for doing everything to help the veterans make the trip, some of them had more difficulty flying. The flight was funded by donations, otherwise Martin said he absolutely didn’t have the money nor the ability to make the trip.

“They made everything so easy, it was just like being held in a mother’s arms. They did a great job,” he said. “They helped us on the airplane, they got us seated, even at lunch time they had box lunches coming and going that they had gave us. They couldn’t have done it better.”

All but two of the other veterans were from Las Vegas, Martin said.

It would be expected the veterans would be grumbling among themselves during the trip about politics and the shutdown, but Martin said that wasn’t the case.

“There wasn’t much political talk at all, there really wasn’t. We were very quiet and subdued. My wife put it right, it was a contemplated journey. We thought of what was and what we went through,” he said.

But asked his opinion about the shutdown, Martin said, “I think it wasn’t good on the government’s part and (President) Obama did it just to make us miserable.”

Martin said the reception when they arrived back at McCarran Airport in Las Vegas Sunday blew him away as well with another throng of well-wishers.

“When we came into Las Vegas they had an orchestra there, then they had the bagpipes playing at the same time. It was so noisy,” Martin said. “We were 90 years old, we can’t stand too much of that stuff. They gave us a heck of a greeting.”

“The speech the governor gave was the best. He said you were the generation of all times for America in World War II. No other generation will go up to your ability and what you accomplished,” he said.