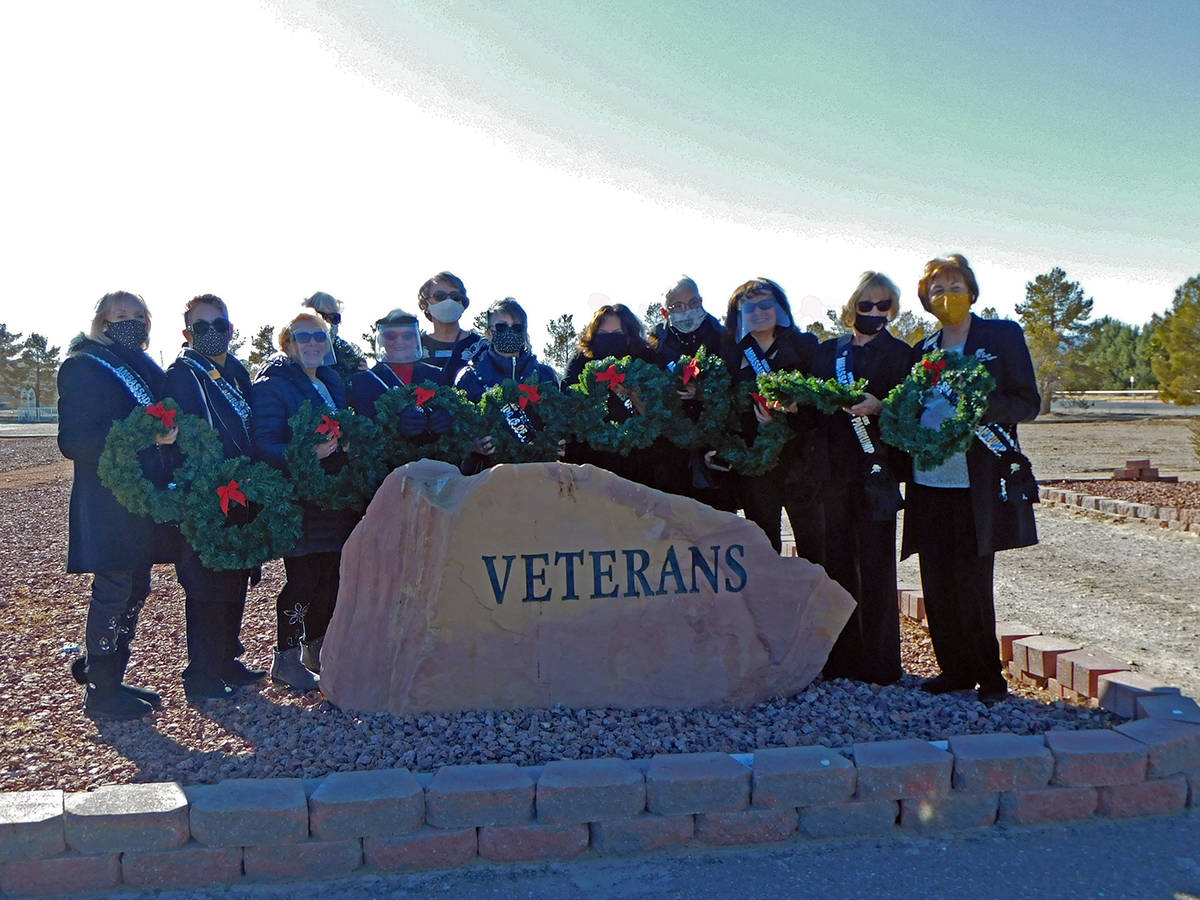 Robin Hebrock/Pahrump Valley Times The Nevada Silver Tappers are pictured holding the new Christmas wreaths the organization purchased this year to lay upon the graves of veterans buried at the Chief Tecopa Cemetery. 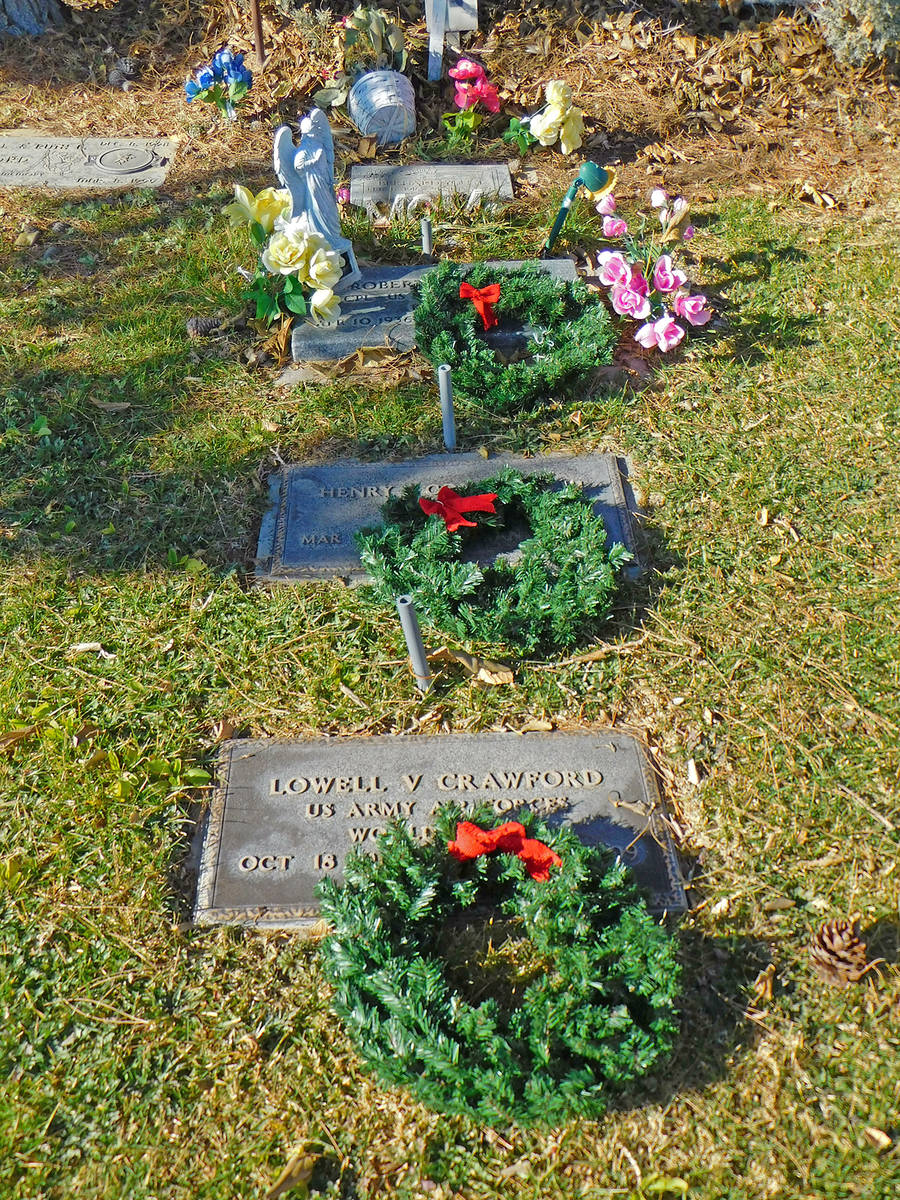 Robin Hebrock/Pahrump Valley Times Veterans laid to rest at the Chief Tecopa Cemetery were honored with the placement of Christmas wreaths on their graves. 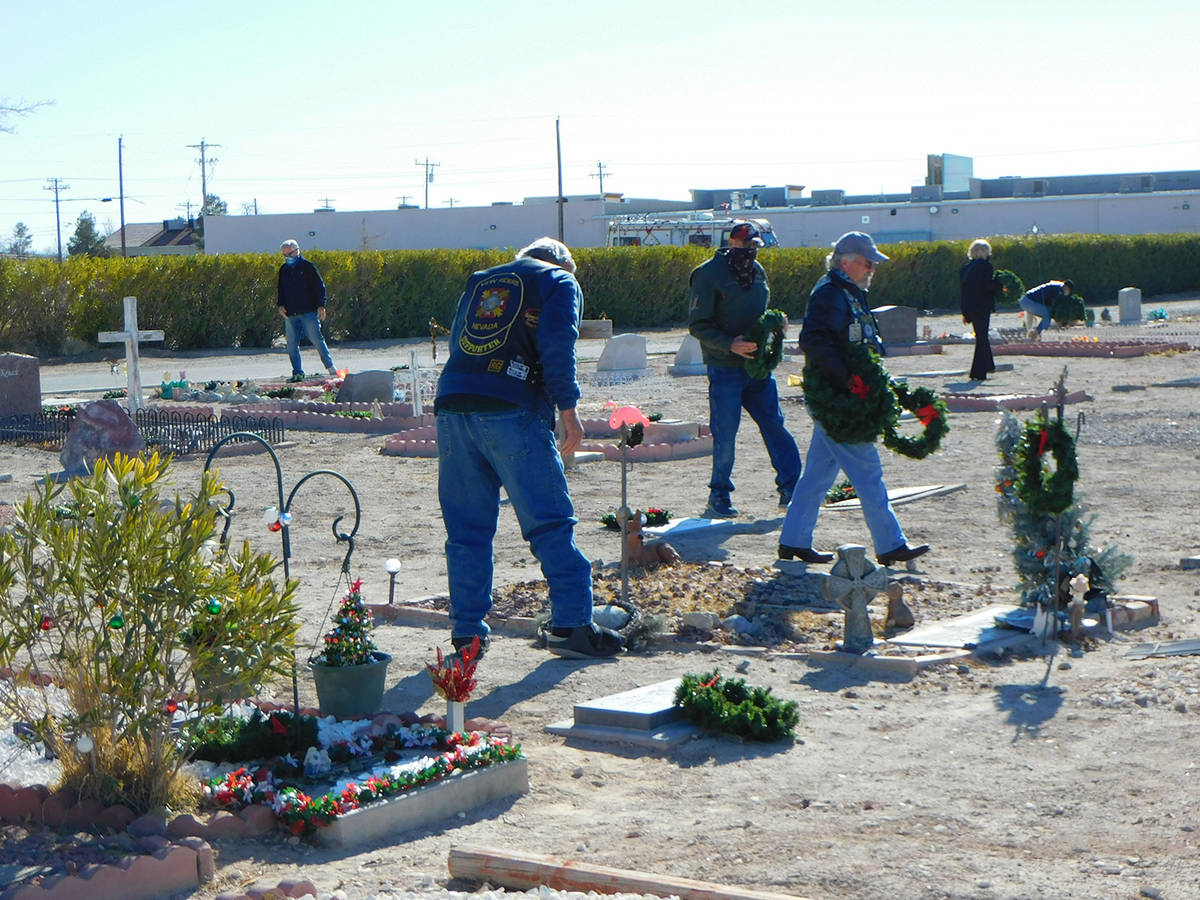 Robin Hebrock/Pahrump Valley Times Local veterans are seen walking through the Chief Tecopa Cemetery and placing wreaths on the graves of veterans. 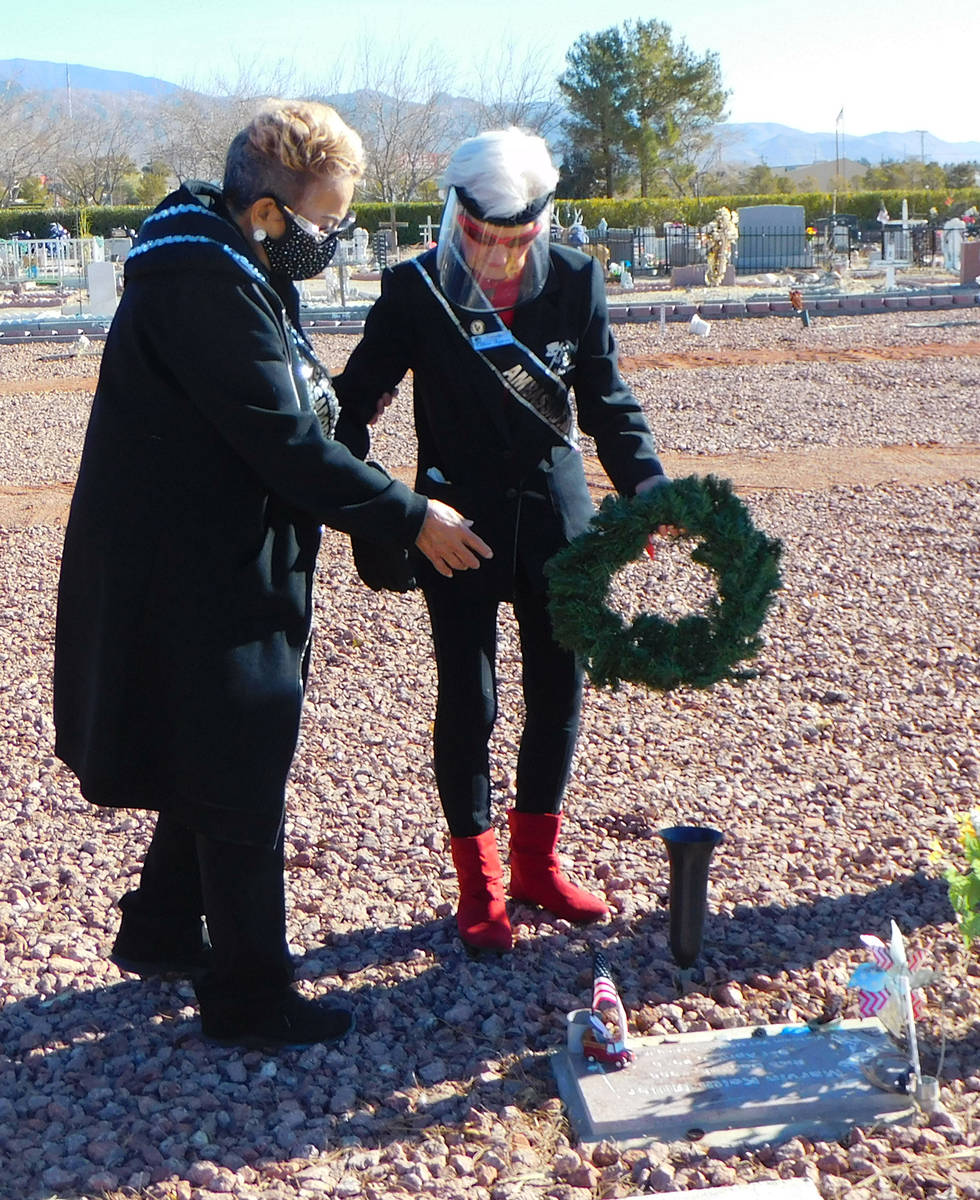 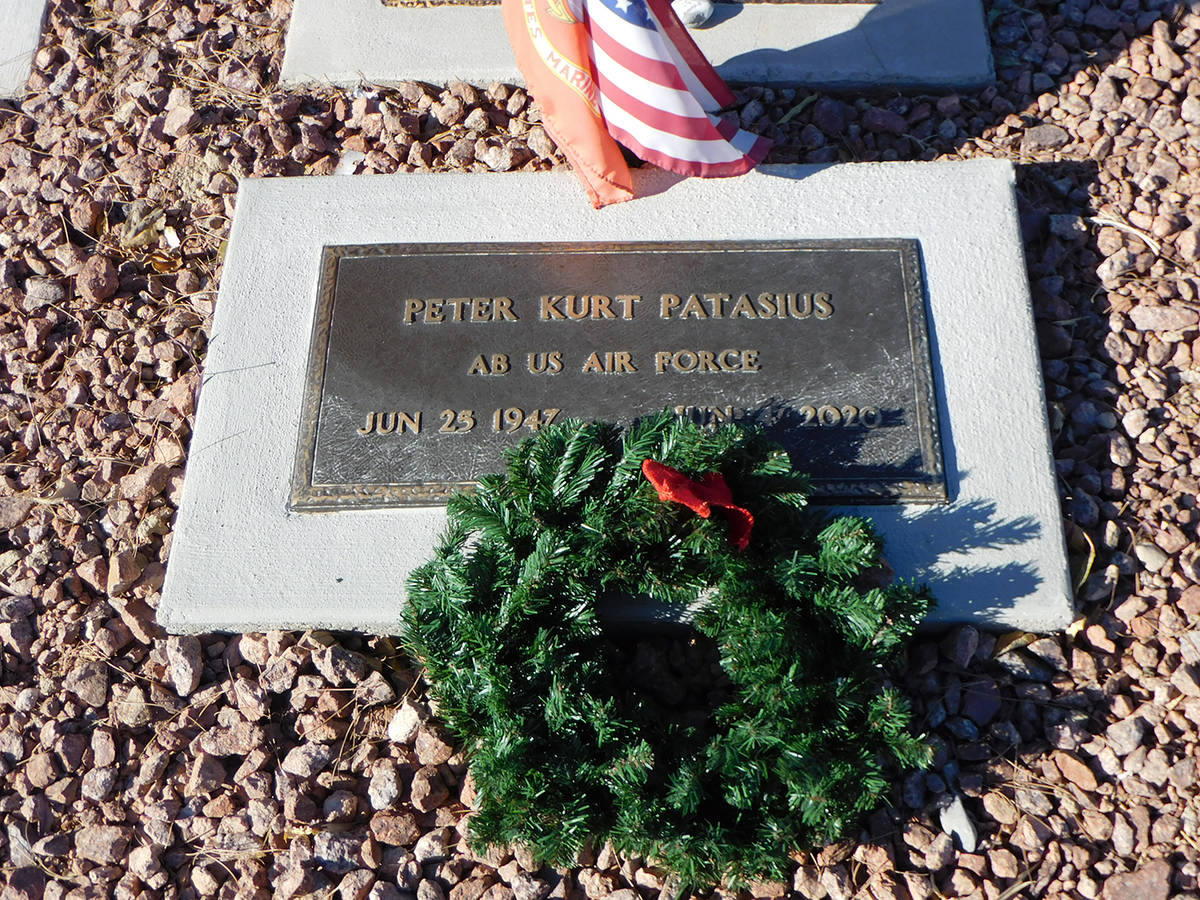 Robin Hebrock/Pahrump Valley Times Wreaths now decorate the graves of the men and women who served in the U.S. Armed Forces and were laid to rest at the Chief Tecopa Cemetery. 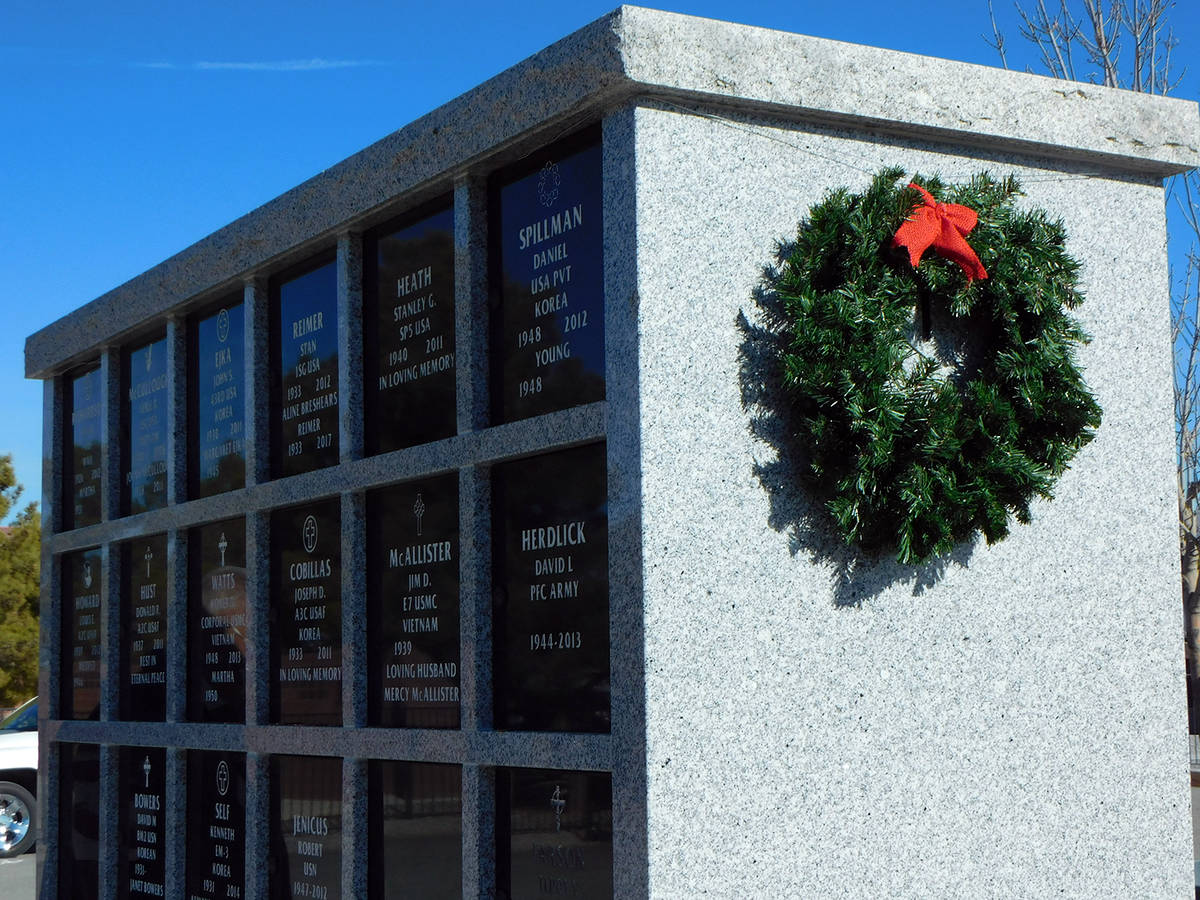 Robin Hebrock/Pahrump Valley Times The columbarium at the Chief Tecopa Cemetery was given a bit of Christmas cheer as well. 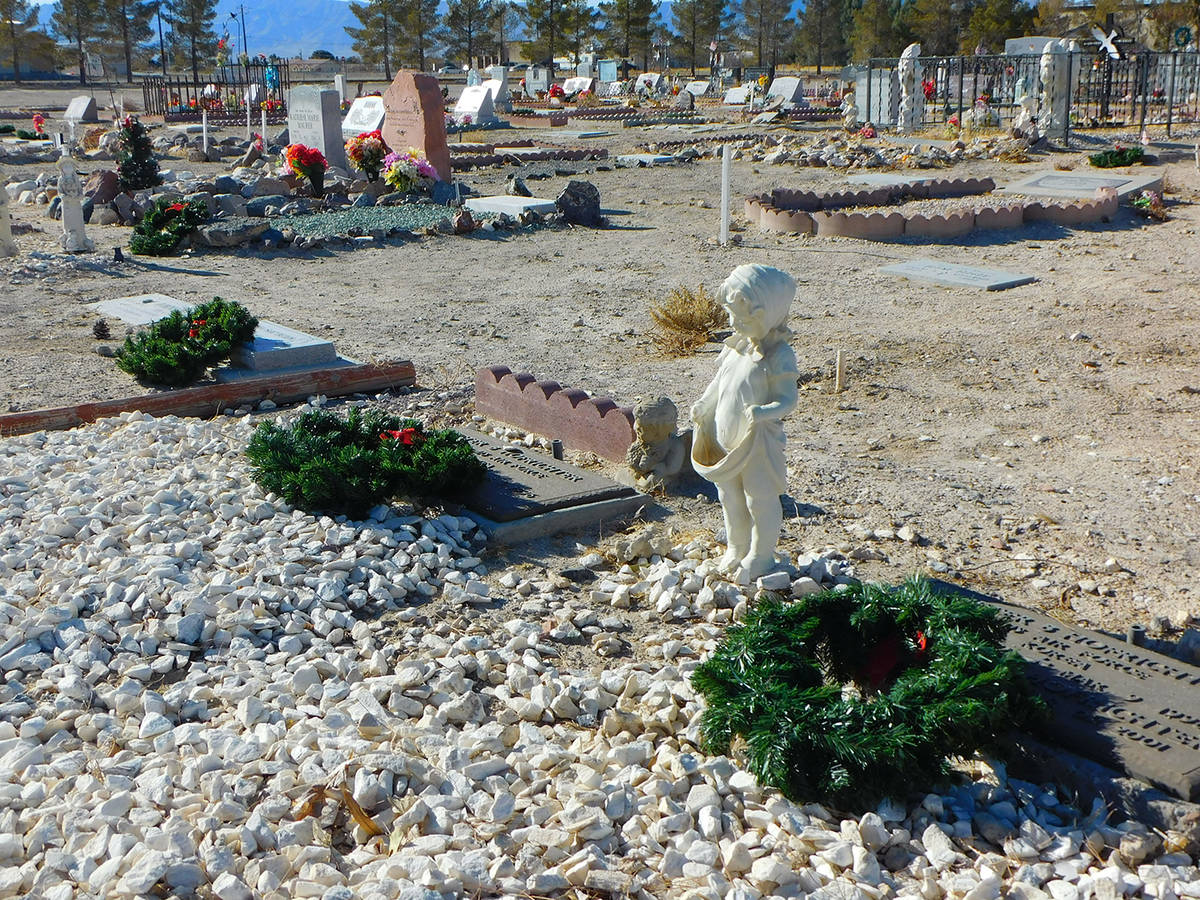 Robin Hebrock/Pahrump Valley Times The Nevada Silver Tappers said they plan to make the decoration of veterans' graves at the Chief Tecopa Cemetery during Christmas an annual occasion.

On a bright and chilly morning in the Pahrump Valley, the usually quiet and serene Chief Tecopa Cemetery was alive with activity as the Nevada Silver Tappers gathered with local veterans for a very special occasion.

Equipped with hundreds of Christmas wreaths purchased just for their purpose, the ladies of the Nevada Silver Tappers were on a mission to bring a bit of holiday cheer to the cemetery. With the help of those who had assembled, they laid those Christmas wreaths upon the graves of veterans who have their final resting place at the Chief Tecopa Cemetery.

“In 1992 a group got together and donated 250 wreaths to Arlington National Cemetery. That was the very first Wreaths Across America. Wreaths Across America has grown since then to over 2,100 different locations, not only nationwide but on ships at sea and abroad,” special guest speaker and Disabled American Veterans Chapter #15 Commander Terry Janke stated as the group prepared for the wreath laying that morning.

He explained that the local cemetery, which is home to the Pahrump Veterans Memorial, could not be recognized as an official Wreaths Across America national cemetery but thanks to the efforts of the Nevada Silver Tappers, the town was be able to celebrate the occasion and honor its veterans on its own.

Janke then continued by detailing the motto of Wreaths Across America, which is to “Remember, Honor and Teach.”

“We have to remember our veterans, we have to honor our veterans and we need to teach our youth about what it is like to be a veteran and why they should value freedom,” Janke said.

He also read a quote that no doubt touched the hearts of those present.

“‘The definition of freedom is the condition of being free from restraint but to me, freedom is more than that. Freedom is having the right to be me and express myself. With the freedom our veterans have fought for, we really get to be ourselves,’” Janke recited.

He said he would be more than proud to be able to say he himself had written those inspiring words but the credit for that statement actually goes to a young seventh-grade student from Salem, Oregon, who had written them as part of their entry into the Veterans of Foreign Wars’ annual Patriots Pen essay contest in 2015. They are words that ring with a profound simplicity and truth and they encapsulate the reason it is so important to always honor those who have served.

Pahrump Veterans Memorial Advisory Committee Chair Carl Jones was on hand Saturday morning as well and he provided attendees with direction on how best to lay the wreaths upon the graves, ensuring a uniform display when all was said and done. With Jones’ instructions made clear, the Silver Tappers and their group of veteran helpers then dispersed, carrying armfuls of wreaths throughout the cemetery in search of each of the headstones and grave markers of those who had given their service in the U.S. Army, Navy, Marines, Air Force and Coast Guard.

The Christmas wreaths will remain in place until after the holiday when the Silver Tappers will collect them all and have them placed safely into storage. The wreaths will stay in storage until next Christmas when the Tappers will again undertake the effort to recognize and salute the service of the veterans buried at the Chief Tecopa Cemetery by decorating their graves once more.