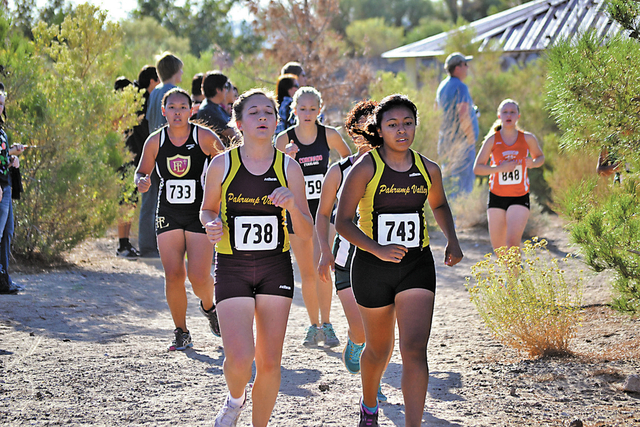 The Trojans are near the end of the cross country season and have one meet to go before regionals.

Divisionals are next week and will be held on Oct. 25, where the winner of the League championship will be decided at Floyd Lamb Park in Las Vegas.

The Trojans women’s cross country team did well at the Lake Mead Invitational held at Veterans Memorial Park in Boulder City. It was a good practice run to see how the Trojans will do against the division and the regionals. The Trojans women finished fourth out of eight teams.

Thelaner is the 17th best cross country runner in the state in Division 1-A and Sanchez is the 37th according to Athletic.net, a site which keeps stats for the whole country.

To be more competitive, the Trojans need to close the gap between the top runner and the fourth place runners. If the Trojans can get more runners finishing around 21 minutes they can be the top team in the division. At the moment, Pahrump has only Thelaner of that quality.

Trojans Coach Matt Kolodzieczyk was disappointed in his team’s finish at the Lake Mead Invitational.

“Hopefully we will do better in regionals. Cheyenne finished ahead of us and we beat them in head to head competition. So, I was hoping we would have run better at the meet, but it is a good indicator of what we have in store, and it is good motivation to work harder with the goal being to get to state. I hope this puts a fire in the belly to do that.”

The regional championship will be at Veterans Memorial Park in Boulder City on Nov. 2. Action starts at 8 a.m.

The top three teams from both Sunrise and Sunset will go to state and then the top five individual runners from non-qualifying state teams will meet. The state meet will be on Nov. 9 at Rancho San Rafael Regional Park in Reno at 9:15 a.m.

At this point, Kolodzieczyk believes Thelaner has the best chance as an individual to go to state.

“We are working on a plan to get the whole team to qualify for state,” Kolodzieczyk said. “Faith will probably make it and so we are fighting for the second and third spot.”

To make it in the top three, Kolodzieczyk would have to have Lawdensky, Descuatan, Sanchez and Ansick run the best race of their careers. These runners all recorded best times around 24:16.4. The coach is probably thinking that a lot of time can be shaved off in the last stretch of the course, which is downhill going into the finish line. If the runners plan for the last stretch maybe his runners can shave a big chunk of time.

The women’s team suffered a big loss early on in the year when they lost two quality runners to Shadow Ridge and the team has not been able to replace them.

“They are doing the best they can. I think they are capable of being good runners but I think they hit a mental block and if only they can break out of that and test themselves — I think they can handle the pace and compete against those schools,” the coach said.