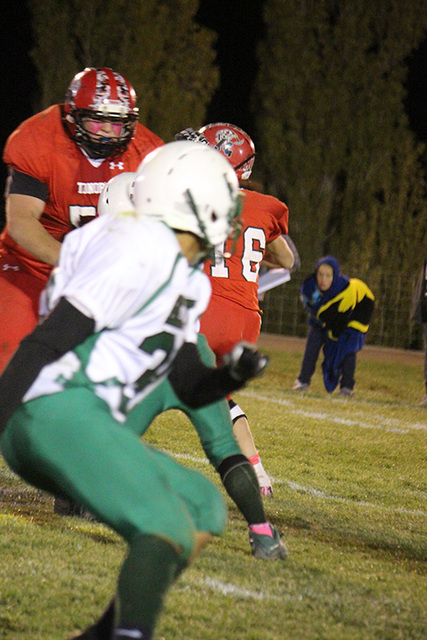 Penny Otteson / Special to the Pahrump Valley Times Isais Femat (sr) drops back for a pass. Although the Hornets gave up 460-yards total offense the Beatty defense held the Muckers to just 20 points.

Beatty running back Michael Olson led the team with 247 yards to help the Hornets won in Tonopah on Friday, 60-20.

The Hornets for sure had a nice bus ride home as they celebrated the big win. Next to the playoffs, the Beatty vs. Tonopah game is the biggest game of the season.

“He also threw a pass for a 38-yard completion to Isais Femet, to the one-yard line,” Hornets coach Leo Verzilli said.

On defense, Olson also played a role. He recovered a fumble and returned it 40 yards for a touchdown.

“Because of him, we were able to run our offense as effectively as we did,” Verzilli said. “For the most part he is a lead blocker and he brings a load.”

The Hornets offensive line deserves some credit for making the gaps in the defensive line.

“Our offensive blocking was excellent, backs hit their gaps, a lot of our yardage came at one and two-yard gains and then we would break one or just continue to drive down the field,” the coach said.

“Defensively we played a great game,” he said. “Our read and recognition was spot-on and the pursuit was relentless. Also, defensively, Mariano Villa took on a double team all night long which freed up our linebackers to pursue untouched.

In the end, Hornets coach Leo Verzilli said everyone deserves credit for the win.

“I can’t talk about all the individual accomplishments that happened Friday night, for it would take too long, chalk it up to a total team effort and a will not to be denied,” the coach said.