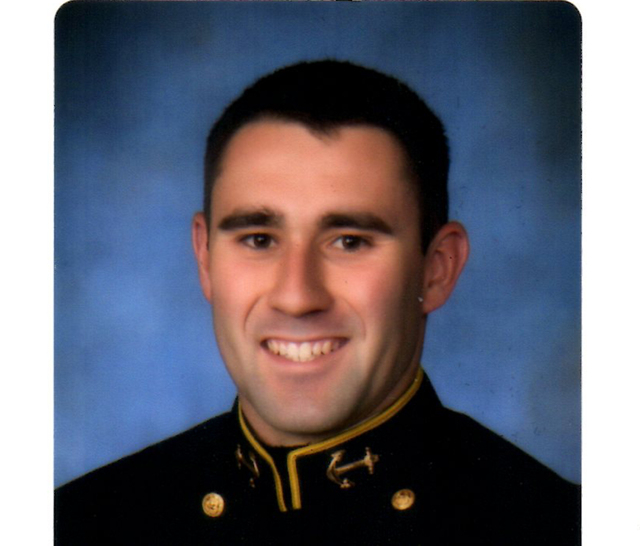 Former Pahrump Valley High athlete Connor White graduated from the U. S. Naval Academy in Annapolis, Maryland on May 22. He was commissioned as a second lieutenant in the Marine Corps.

White is the son of Douglas and Jennie Martin and James and Marlin White.

While at high school, White ran track and played soccer his senior year and graduated in 2010.

“I remember him as a hardworking athlete,” Rieger said. “White had problems with his knees and so he stopped wrestling. By his senior year, he had worked hard in the weight room and could do almost anything in track. In addition to being a great athlete, he also had good grades. I am really glad to hear he is doing so well.”

White completed four years of intensive academic, physical and professional training at the Naval Academy, which resulted in a Bachelor of Science degree with a major in general engineering. The Naval Academy is considered one of the top educational institutions in the country. Since 1845 more than 77,000 have graduated from this institution.

According to his uncle, Senior Chief of the Navy Robert Gavan retired, his nephew was an alternate for the Naval Academy in 2010.

“They told him to take some college math classes and so he took them at the University of Nevada at Las Vegas and was accepted to the Naval Academy the following year.

Gavan said he was a quartermaster on a navy ballistic submarine, which means he was a navigator and used to tell his nephew all about the navy.

“I am very proud of him,” he said. “I told him all about my service on submarines and yes, I hoped he would go into subs, but I was definitely not disappointed of him going into the marines. Someone got to him at the academy and he wanted something physical and I know he wanted to be a marine pilot.”

Gavan said White’s mother pushed him hard and was a positive influence on her son.