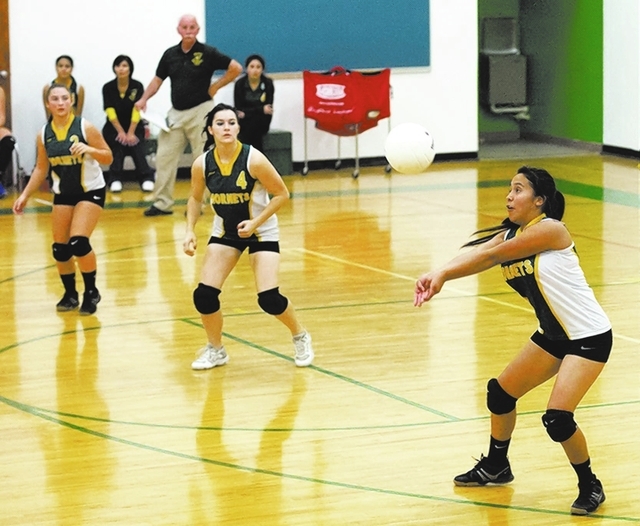 The Lady Hornets slugged it out with the Muckers last Friday and it was all-out trench warfare with Hornets coming out on the losing end.

The Hornets fall to 9-8 overall and 3-2 in league and can firmly entrench themselves as the fourth place team if they can beat Indian Springs today in an away game. At the moment, Indian Springs is 5-1 with a loss to Pahranagat Valley. If Beatty can win their last three games with the other two opponents being Sandy Valley and Adelson, a tie for third is possible. Indian Springs has their last game being Tonopah and they should lose.

Hornets Coach Dale Lerbakken believed his team should have done better against the Muckers.

“Our game with Tonopah was not typical of anything that we have played thus far. Our serves were long, our hits for the most part were long and we did not have any good games. Tonopah on the other hand, had an outstanding game, as we were told by the fans from there,” Lerbakken said.

Lerbakken believed his team was too timid against the Muckers and he said when you come out that way, “you lose.”

The coach remained positive about his last two games of the season. The Hornets should easily make the top six teams, which will make the playoffs.

“We have important games to work ourselves back into a winning frame of mind, and all the girls understand that. Indian Springs and Sandy Valley are no push-overs and we have to be better than we were last weekend,” he said.

Southern Division 4 Volleyball is led by two dominating teams, the Muckers and the Pahranagat Valley Panthers. Both teams are undefeated in league play.

The Muckers are being coached by first-time head coach Harvey Gonzalez who took over from the retired Judi Boni. Boni led the Muckers to their first state title in volleyball last year.

The Panthers are being led by veteran coach Ginger Whipple who has appeared in the state title finals 17 times since 1996.

The playoffs start Nov. 5. The top two teams will advance to state and play on Nov. 15 and Nov. 16 in Las Vegas.