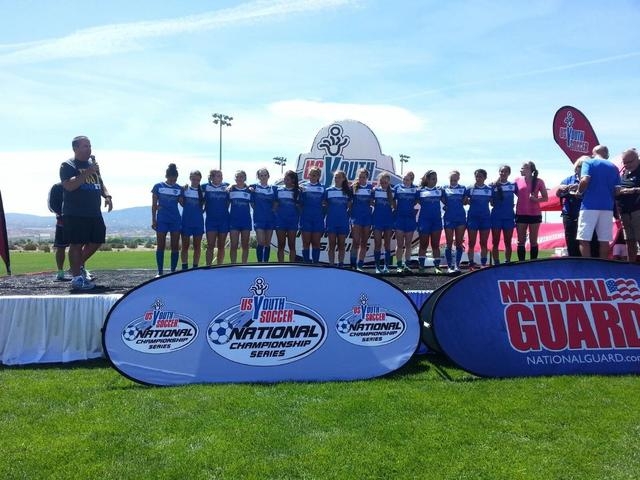 The Players SC 96 Elite under 18 club team out of Las Vegas traveled to Germantown, Maryland for the National Championships. The team represented Nevada and traveled with six Pahrump girls. The team was coached by Joe Sladek and was in a tournament with the top eight club soccer teams in the nation.

The team played three games and lost all three. They played Beading SC Thunder from Pennsylvania on Tuesday of last week, losing 0-4. On Wednesday, they played BRYC 95 from Virginia and lost 4-1. Finally, on Thursday, they played Cleveland United White from Ohio and lost 3-0.

According to Sladek, his team had a rough go of things. The team lost their lead scorer, Sydney Sladek, during the first game due to an ankle injury. Another player went down with an eye injury in the second game.

Joe said despite losing, he was privileged to have coached such a great team and also play against such great competition. This was the first Nevada club team to make it to Nationals. He also said two of the three teams they played had won the national title before and the third team from Ohio had been to nationals a few times.

For Joe, this could have been his swan song, but he said he doesn’t want it to end. “I could go to nationals again. This year does not have to be my last. Of course, it all depends on the girls returning next year to play, so it is possible to go back next year. If not next year, I am also willing to train some girls to go again. It takes a few years of training. Maybe some girls from Pahrump would like to go,” Sladek said.