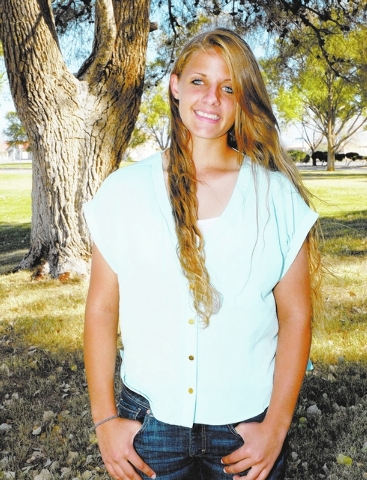 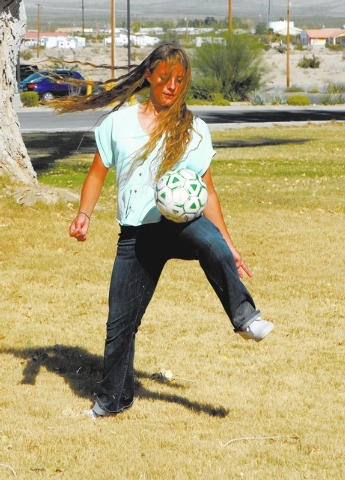 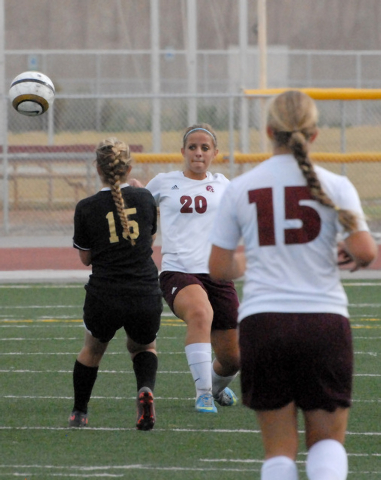 The Lady Trojans soccer team’s defensive line lets few balls pass. So few, that goalkeeper Kiaya Nauck is close to breaking the state record for most shutouts in a career.

Junior Alyssa Turner is another reason the defense does so well.

Turner knows defense and has played a large role in the past two years in keeping the opposition from scoring as a main starter in the Trojans’ defensive line.

When the Trojans play the hard teams, like Arbor View, Faith Lutheran and Green Valley the team depends on Turner and the line to keep the balls out of the goal. The defense gets serious and players like Turner take their jobs to heart.

The Trojans have been lucky to have senior players on the team with enough experience. This has given them the edge in competition. One of the last senior defenders to hold the job was Kaitlyn Klem who came up the ranks just like Turner.

It’s up to the senior players to teach the younger players. Last year Turner was mentored by Klem who is now playing for the Division 1 Grand Canyon University Antelopes in Arizona. Turner now teaches players like Jamie Murphy, a new defender on the team. This passing of knowledge has worked well for the team, but another aspect of a great team is having enough players with quality experience.

Turner has played the game of soccer since she was 4-years old, and grew up with AYSO. As a teen, she graduated to club ball because she needed more competitiveness in her soccer. Club soccer gave her the quality she needed to be successful. This is the only sport Turner plays and it is what she knows.

Turner on defense — “Let’s say we have some offensive players that pass our defense. If there are two middle defenders and two outside defenders and there is an offensive player coming straight at you we kind of automatically know that I will pressure and Brittany will swoop in.” She can speak for hours on a defense designed by Head Players Coach Joe Sladek.

The young defender says there is a major difference between club ball and AYSO. She believes club ball to be way more technical than anything she has played before. She even played on two different club teams at the same time, which is how much she enjoyed playing the game.

Turner finally left one club team, when she realized this team was just not playing at the level of soccer she felt they should be playing at, so she left that team for just Sladek’s Players team.

“Pretty much every time I went to practice with them (Players) I felt I was learning soccer for the very first time. He had so many different plays and positions and I learned a different way of defense, I mean it was a better way,” she said. “I stayed with my coach instead of going with Joe’s team and now that I think about it, if I had gone to Joe’s team earlier I think I would have been so much better.”

Turner also believed the game (club soccer) required more skill. On defense, she was doing more than just booting the ball away. In Sladek’s defense, he required more movement in his back line. She said the line was constantly moving and required a lot more thinking from each individual player on that line. Some defenses get in trouble and they kick it away or kick it out of bounds. Sladek wants his defense to find an open player.

“The defense is where the offense starts,” Sladek said. “Alyssa is a physical player she has decent speed. For the last two years we have been working on the brain side of the game. She has definitely learned that the offense starts with the defense controlling the ball and distributing it to the proper player. We start our attack out of the back line and then go forward. That is the most difficult thing for players to learn and that is every player is involved on the defensive and offensive side of the ball. The poor players just get rid of the ball and say they are not involved now. The better players learn, I am constantly involved.”

Turner has ingrained Sladek’s style of defense into her mind.

“It may seem like the defense doesn’t do anything. You have to know your defenders. You have to see more of the field than the mids and the strikers. You have to watch them, talk to them and let them know to turn or where to go,” Turner said.

Of course, the club ball did lead to high school ball. Turner made the team as a defender, but because in 2011 the team had so many veteran players she played on the junior varsity team her first year. She remembered being disappointed at first, but Sladek explained to her she would get more playing time this way.

“I went to the preseason workouts trying to work really hard, so I could even be considered for the varsity,” she said. “I still remember the first day. The coaches would always split us up and put us where we stood. When Pam (head coach) put me in with Sydney (Sladek) and Lexi (Smith) it was ‘holy crap they see something in me.’”

Even though Turner was officially on the JV team, she never practiced with them.

“I was always up practicing with the varsity team. I did have a varsity jersey, because I did go to some of the games, but I still was officially with the JV team and played mostly with them.” Her hard work paid off and Turner made varsity her sophomore year.

For Pat Turner, her father, the intense soccer schedule meant more of a sacrifice from his family. He never doubted his girl would do great things with soccer.

Family life was not going well with the recession and he was on disability for a while. Despite his family going through financial hardship, he drove his daughter into Las Vegas six days a week to support Alyssa’s soccer. He knew at the time this was her future and that he was helping his daughter secure a college education.

“The soccer allowed me to spend a lot of quality daughter-father time together,” Pat said. Time, which was slowly fading away as her graduation nears. He said his daughter has a 4.2 GPA and is confident she will go to college and realize her dreams.

It was not just her father. Her mother, Bonnie was also very supportive. The two parents bent over backwards for their daughter. They not only went to every game, but they also volunteered for special details, working snack bars or helping with fundraisers.

Alyssa knows she is lucky to have good parents.

“I think my parents really pushed me to work really hard and do well in school. They always praised me and helped me with my homework and they were really big into education. They told me they would make soccer happen for me and college,” she said. In college Alyssa is thinking about the medical field. As far as where she is going to college, she has no idea at this point with still a year to go in high school.

Sladek explained to Alyssa how her club soccer was going to get her a scholarship. He told her this season and all through the year Alyssa will have to attend college showcases. Each year club players gather for large tournaments in cities all over the country. Some of the bigger ones are in Orlando, Fla.; San Diego, Calif.; and Las Vegas. The showcases attract around 500 players from the surrounding states and coaches from practically every college. The purpose of the showcases is to expose kids to college coaches. This is exposure that Alyssa could never get unless she was in a bigger high school and even then it is rare.

“Alyssa will be selected by a college. It may not be a big school, but she will get a scholarship to play somewhere,” Sladek said confidently.

In the end, Alyssa has a good attitude about life and in general about her dreams and aspirations.

“I want to travel and get with kids that in general don’t know what to do with their lives. I want to show them that everyone has a talent and can do anything you can put your heart to,” she explained.