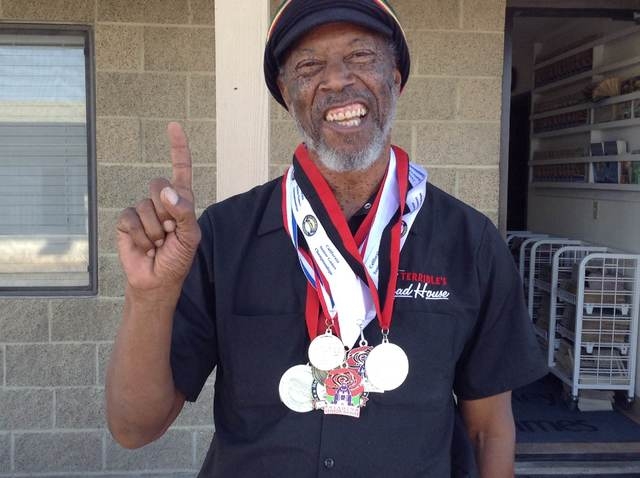 For Sprinter Marvin Caperton it’s that time of year again, when seniors like him from all over the country see if they still have what it takes to compete.

Caperton qualified for the nationals last year in the 50-meter dash and the 100-meter dash, which will allow him to participate at the 2015 National Senior Games in Bloomington, Minneapolis and Saint Paul, Minnesota from July 3 to 16.

The senior sprinter played football for UCLA under Dick Vermeil from 1973 to 1978. He was a 1972 graduate of Clark High School and played on their 1972 and 1971 state championship football teams as a running back. UCLA changed Caperton into a wide receiver.

Caperton just ran in California at a senior meet to get warmed up for the nationals. He took second place (7.2 seconds) and a third in the 100-meter dash (13.7).

“It surprised me that I did so poorly,” he said. “I thought I was going to blow right by these guys. I got off to a good start in the 100 and then the two guys just ran right by me and there was no way I was going to catch them.”

He said he probably will see these guys at the nationals. They both finished in the low 13 seconds.

The former UCLA football player has run the senior games for the past 10 years.

“I am still working out three times a week and my intention is to lower my time by 3/10 of a second,” he said.

He said he enjoys going to the nationals and competing. Each year the national senior games is held in a different city. This year in Minnesota he expects up to 12,000 athletes to be there.

At the national senior games, he will be going against some of the fastest seniors and running four races in two days.

Caperton said seniors don’t have to qualify to go to the Huntsman, but at the nationals one has to qualify at a state- run senior event.

“I prefer the national competition better because in my opionion in track and field the quality of the runners is better,” he said.

Caperton has noticed he has slowed down a bit over the past 10 years. He is now two seconds slower in the 100.