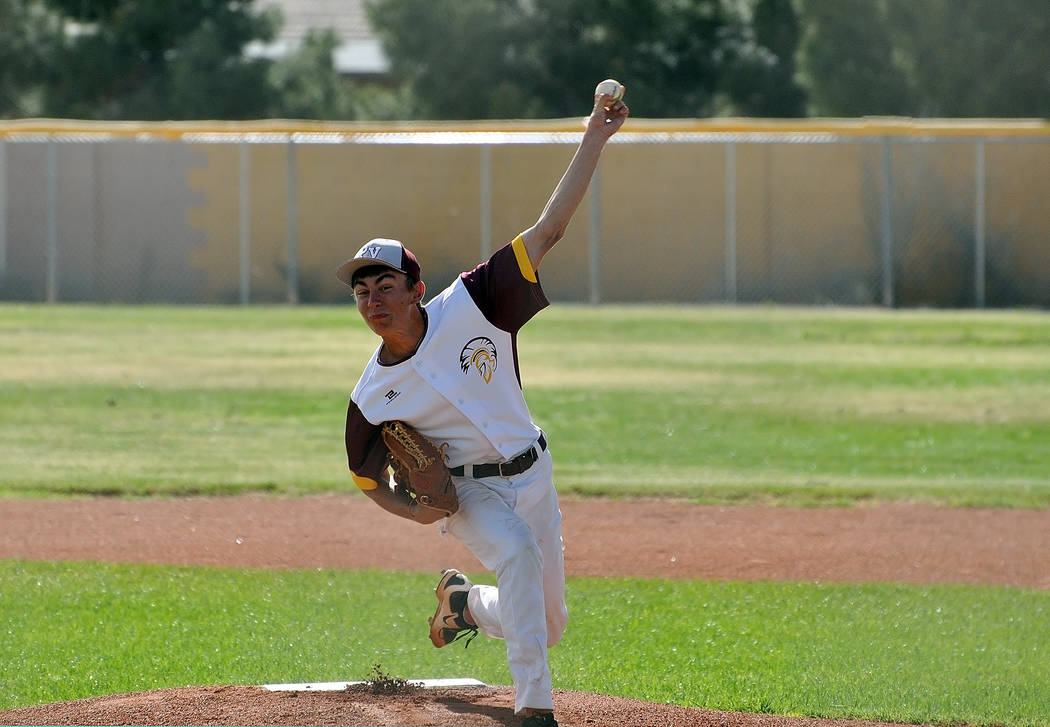 Garrett Lucas is seen on the mound for Pahrump against Chaparral on Monday. Lucas was the winning pitcher against the Cowboys, allowing three unearned runs as the Trojans cruised to a 9-3 win. Horace Langford Jr. / Pahrump Valley Times

After a complete game, Lucas said he could have pitched more.

“I felt I could go another seven innings,” he said. “I think my arm feels good because of all the strength training I did in the offseason.”

Trojans baseball coach Brian Hayes said that Lucas is the go-to pitcher this season for the Trojans (4-4 Sunset League) and he wasn’t ever worried about Lucas during the Chaparral game.

“The only time we worry about Garrett is when the pitch count gets high,” Hayes said. “The last inning he was getting close to about 100. He was our guy last year and he will continue to be this year. We will let him pitch through in the early games to see what he can do. That’s why we kept him in there.”

Lucas had only two rough innings out of the seven, allowing one run in the first and two in the fifth. The runs were all unearned runs due to errors.

Lucas said he wasn’t fazed by his performance in the first or fifth inning.

“I just told myself to throw strikes, put the ball in play and my team will do the rest,” Lucas said. “My best pitch was my changeup.”

Pahrump scored its first runs in the bottom of the third inning, when the lead-off runner, sophomore Nico Velazquez, got on after being hit by a pitch. The next batter was Drew Walker, who walked and the two were driven in by senior Parker Hart, who blasted a ball into left field for a double. Hart would score on a hit by freshman Cyle Havel.

The Trojans then had a big inning in the fourth after Anthony Charles hit a lead-off single. Then with a man on first and second, Velazquez got an RBI on a ground ball. An error and two hit batters were also driven home by freshman Cyle Havel, giving Pahrump four runs that inning.

Velazquez was the lead-off batter in the sixth and again used his body to absorb another pitch. He then stole second base and third and scored on a Hart base hit. Hart then scored the final run for Pahrump.

After the game, Hayes praised his team. He told his team that Chaparral had beaten three of the teams in the Sunset League, Cheyenne, Western and Sunrise Mountain and he said Chaparral would probably be one of the teams to beat in the Sunrise League.

“Usually Chaparral is a pretty sound team,” he said. “They are pretty fundamentally sound and usually don’t give us runs. They probably gave us three or four runs and that is unusual.”

Hayes said his team has got to decide which team will show up for Wednesday’s game against last year’s state champion, Boulder City. Will it be the team that played three solid games in the last three games or the team that played poor defense in the beginning of the season? Boulder City’s (3-5) three wins are all from Sunset teams, Cheyenne, Western and Mojave. If Pahrump beats Boulder City, that could mean that the Trojans are the team to beat.

Boulder City will host the Trojans, and the game is set to start at 3:30 p.m.