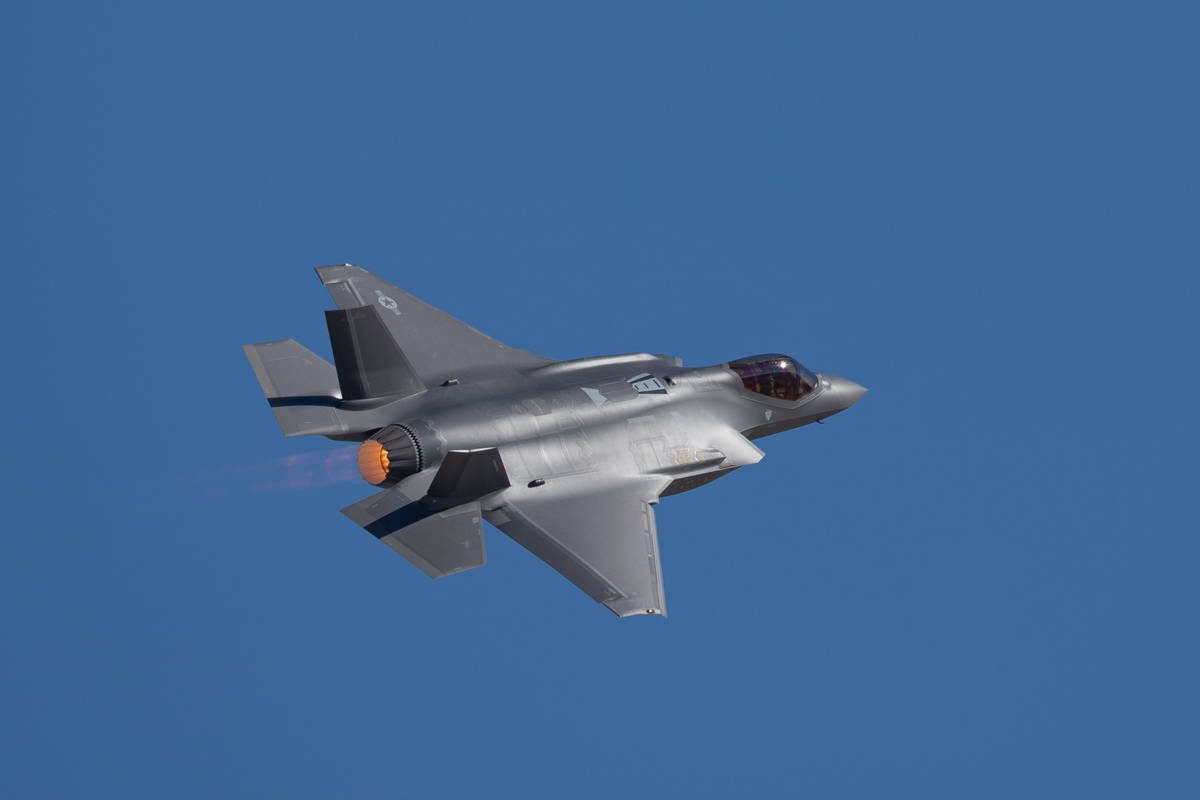 Getty Images The F-35 Lightning II is pictured with its afterburner on.

A mock B61-12’s strike in the dusty Nevada desert successfully completed the first in a series of flight tests with the U.S. Air Force’s newest fighter jet, demonstrating the bomb’s first release from an internal bomb bay at greater than the speed of sound.

The flight test of the B61-12 with the F-35A Lightning II this summer was the first at Sandia National Laboratories’ Tonopah Test Range featuring the fighter jet. It was also the first of a testing series that will conclude with full-weapon systems demonstrations designed to increase confidence the bomb will always work when needed and never under any other circumstances.

“We’re showing the B61-12’s larger compatibility and broader versatility for the country’s nuclear deterrent, and we’re doing it in the world of COVID-19,” said Steven Samuels, a manager with Sandia’s B61-12 Systems Team. “We’re not slowing down. We’re still moving forward with the B61-12 compatibility activities on different platforms.”

In partnership with the National Nuclear Security Administration, Los Alamos National Laboratory and the Air Force, Sandia completed a B61-12 full-weapon system demonstration with the F-15E Strike Eagle fighter jet in March and another in July with the Air Force’s B-2 Spirit bomber.

Sandia is the design and engineering lab for nonnuclear components of the nation’s nuclear stockpile, including the B61-12. In addition to non-nuclear component development, Sandia serves as the technical integrator for the complete weapon, assuring the system meets requirements as a full-weapon system.

During the Aug. 25 flight test, an F-35A flying faster than the speed of sound dropped a B61-12 — containing nonnuclear and mock nuclear components — from about 10,500 feet above Tonopah Test Range. The inert B61-12 struck the desert floor in the designated target area about 42 seconds later.

“We successfully executed this historic, first-ever F-35A flight test at Tonopah Test Range within the specified delivery criteria,” said Brian Adkins, range manager at TTR. “The success of this test, as with all other weapons evaluations, is only possible through the detailed planning, combined with full collaboration between TTR and the program engineers, and the execution of the test evolution by the field operators and recovery specialists in the combined team of Sandia and TTR’s operations and maintenance subcontractor, Navarro Research and Engineering.

“With the multiple phases and operational activities a test involves, the team at TTR is diligent to integrate safety and security into all segments to ensure proper precautions are implemented for mission success.”

Coordination between Sandia, Los Alamos, the NNSA and the Air Force made the flight test possible, and initial data shows that all systems and interfaces between the refurbished bomb and the F-35A worked as expected.

Unlike previous fighter jets, the F-35A carries the bomb internally. The recent flight test was the first demonstration of a fully instrumented B61-12 release from an internal bomb bay on a fighter and the first such release at speeds of Mach 1 or greater, Samuels said.

“This was the first test to exercise all systems, including mechanical, electrical, communication and release between the B61-12 and the F-35A,” he said.

The F-35A is a fifth generation fighter and is described by an Air Force online fact sheet as an “agile, versatile, high-performance, 9-G capable multirole fighter” with stealth technology and advanced sensors. Nine countries — the United States, the United Kingdom, Italy, Netherlands, Turkey, Canada, Denmark, Norway and Australia — were involved in the fighter jet’s development.

“The latest test is a critical piece in the F-35A and B61-12 program,” Samuels said. “Aboard the newest fighter, the B61-12 provides a strong piece of the overall nuclear deterrence strategy for our country and our allies.”