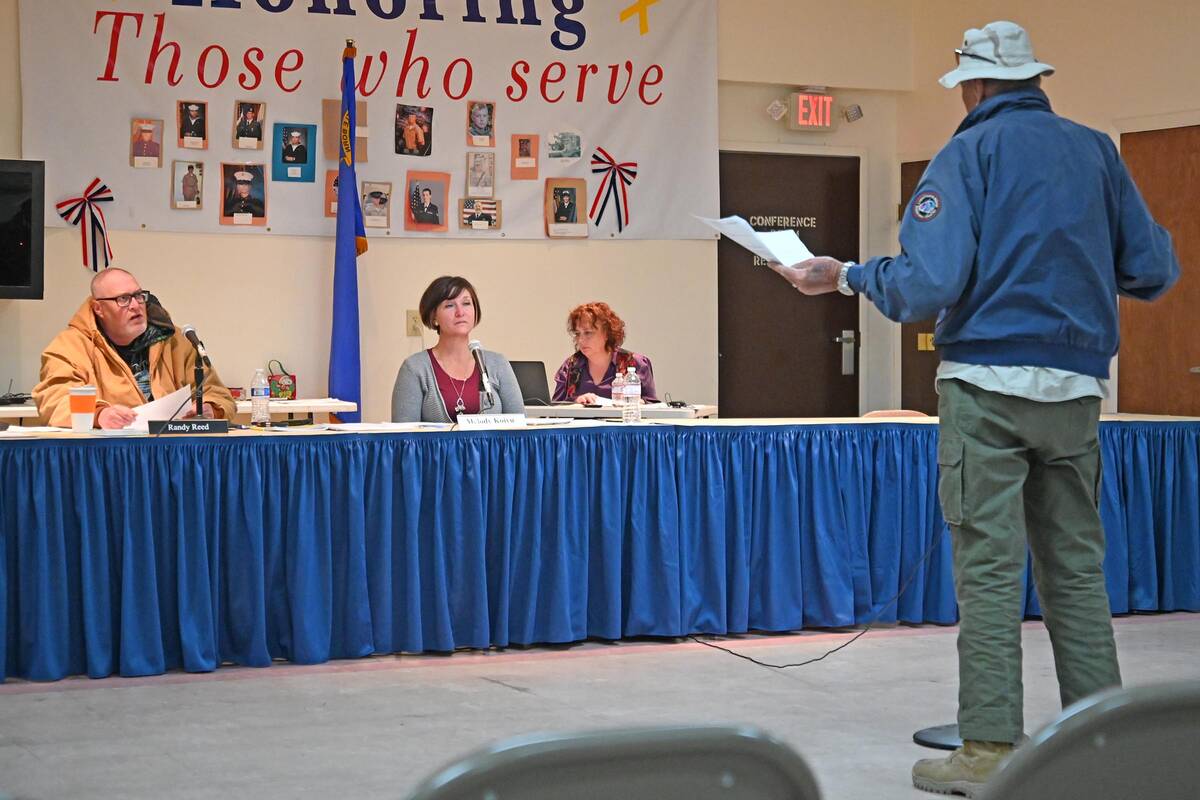 Richard Stephens/Special to the Pahrump Valley Times Karl Olsen addresses board about sending a letter to mining companies about working together to preserve the off-highway trail system. 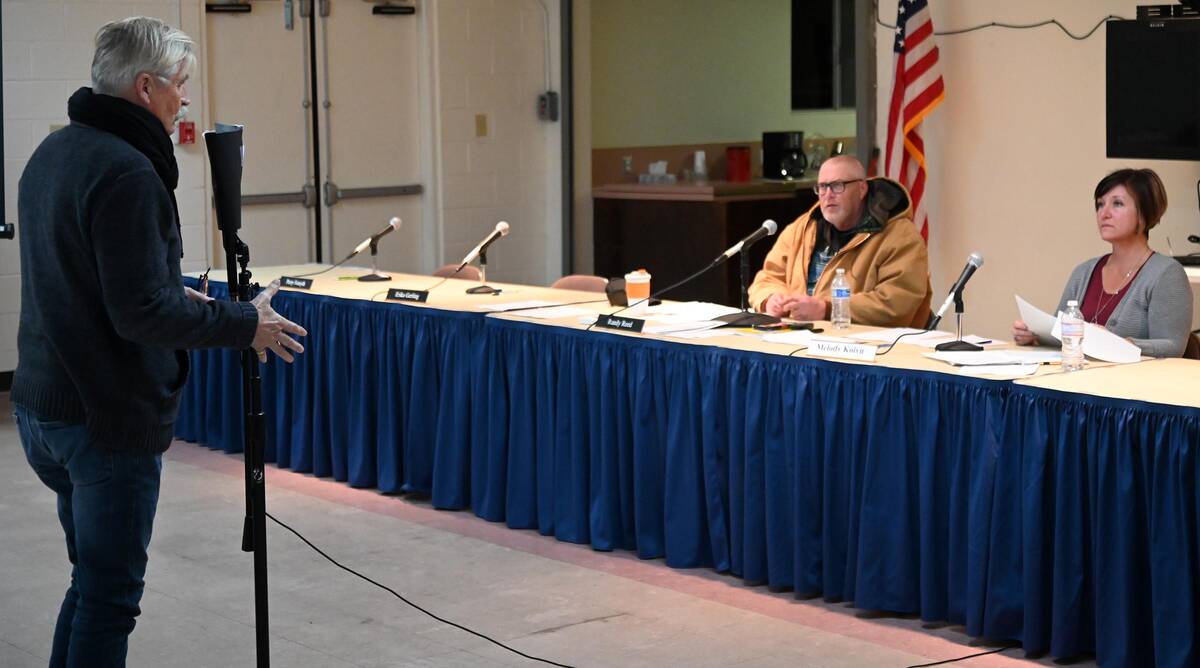 Richard Stephens/Special to the Pahrump Valley Times Rupert Bragg-Smith addresses board about his problem with lighting from the Family Dollar Store. 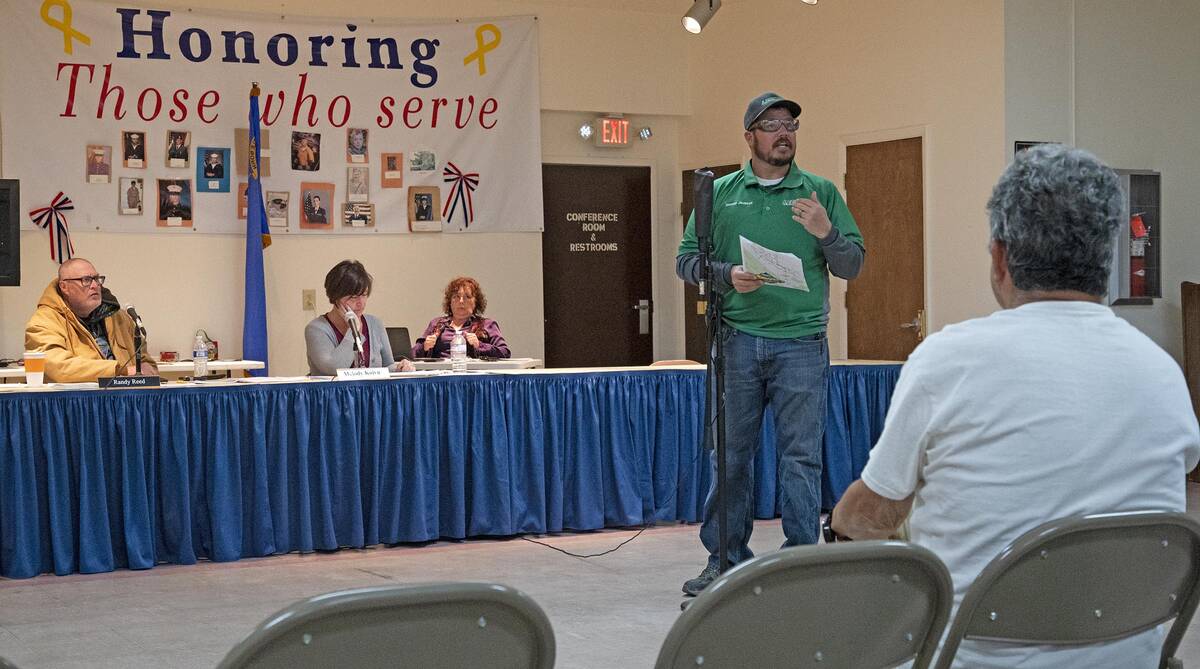 The Board considered a couple of issues having to do with off-highway trails.

Local trail developer Karl Olson approached the board with a request to send a letter to the mining companies working in the area, requesting that they work with the town to try to preserve as much as possible of the existing trail system. The letter also would also ask the mine operators to build alternative roads where it was not possible to keep parts of it intact.

“We need to see if we can keep some of the trails. We can’t keep them all,” said Olson.

Resident Chad Marchand, who has had an extensive career in mining and mine management, said that any request to a mine needed to be more specific, and after more discussion the matter of sending the letter was tabled to provide time for a more specific letter addressing the particular areas of concern for each mine.

Off-highway trails were the again the topic of a lot of discussion when Donald Jackson, operations director for Legacy Racing, came before the board.

Jackson acknowledged that people had not been satisfied with post-race reclamation to roads in the area in the past, and wanted to work with the town and the Board to identify areas of concern and find a workable way to bring off-road racing back to Beatty.

“We want to get back in good standing with Beatty,” said Jackson. He met with a lot of criticism about how things have turned out in the past.

Olson and Marchand were among those complaining about the condition roads have been left in after being used for races and the hardship this imposes on others who enjoy off-highway exploration.

Olson recalled that, after the last race that came through Beatty, the race organizers’ reclamation crew had been called back four times before the work was satisfactory.

Marchand, himself a fan of off-road racing, questioned what Legacy would do about 80-foot-wide disturbances, when they were only grading a 14-foot-wide road. Jackson said that they would drag chain link over the disturbance and reseed it.

Resident Frank Jarvis, a former lieutenant in the Nye County Sheriff’s Office in Beatty, asked what the race organizers do about bad behavior on the highway, like pit crews racing from station to station.

Jackson said that they issue time penalties to the racers whose crews are guilty, but that did not satisfy anyone. Marchand said time penalties wouldn’t make much difference for crews of a competitor who was far behind anyway.

The overall sentiment from those participating in the discussion was that the economic benefit of the races to the town was not important to residents, and that, though race day was exciting, the overall effect was negative for those who live there the other 364 days of the year.

Jarvis said that though the races were fun to watch, he is no longer in favor of them. “I don’t want to not like them,” he said, “but the negatives are hard to take.”

The board voted to work with Legacy to see if a route could be found that racers could use that would not interfere with trails used by other off-highway enthusiasts.

In a separate matter, Rupert Bragg-Smith, who lives across the street from the Family Dollar store in Beatty, requested that members of the Board visit his home to “see the damage” caused by light from the store that falls on his property.

Bragg-Smith has had a long-standing complaint about light from the store. He said it is “very powerful LED blue light that is harmful to your health and harmful to your demeanor. Eventually you’re going to see me go crazy.”

He would like the store to change its blue lighting—both in the parking area and inside the store—to amber, which he says is better for health and more in keeping with the historical nature of the town.

Providing a copy of a light ordinance from Pahrump, he said he would like Beatty to have an ordinance that would call for amber light and would prohibit light from one property from encroaching on someone else’s property.

The Board voted to work with Bragg-Smith to find a time for members to visit his property and assess the situation.