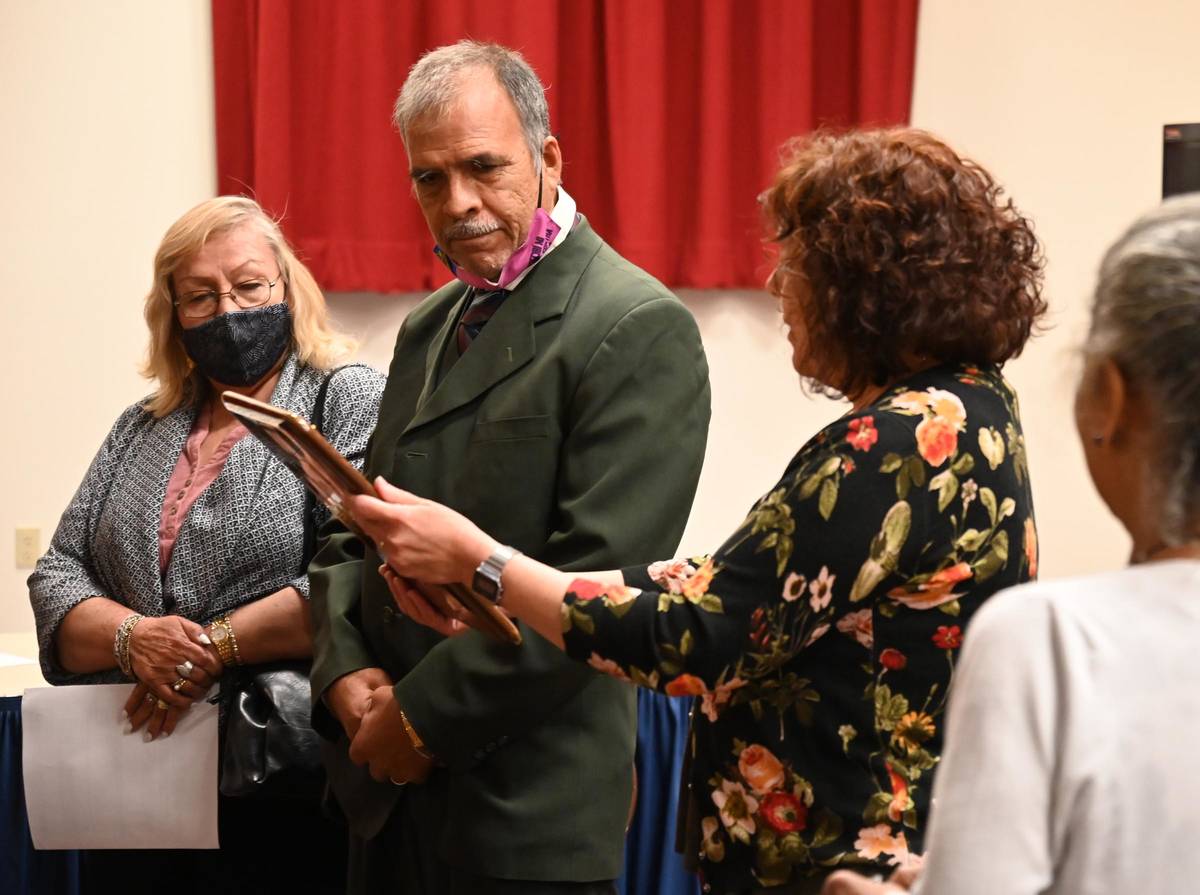 Richard Stephens/Special to the Pahrump Valley Times Ricardo Lopez, Beatty town custodian (center), is handed a plaque by Carrie Radomski, Beatty town secretary during an April 26 meeting of the Beatty Town Advisory Board. 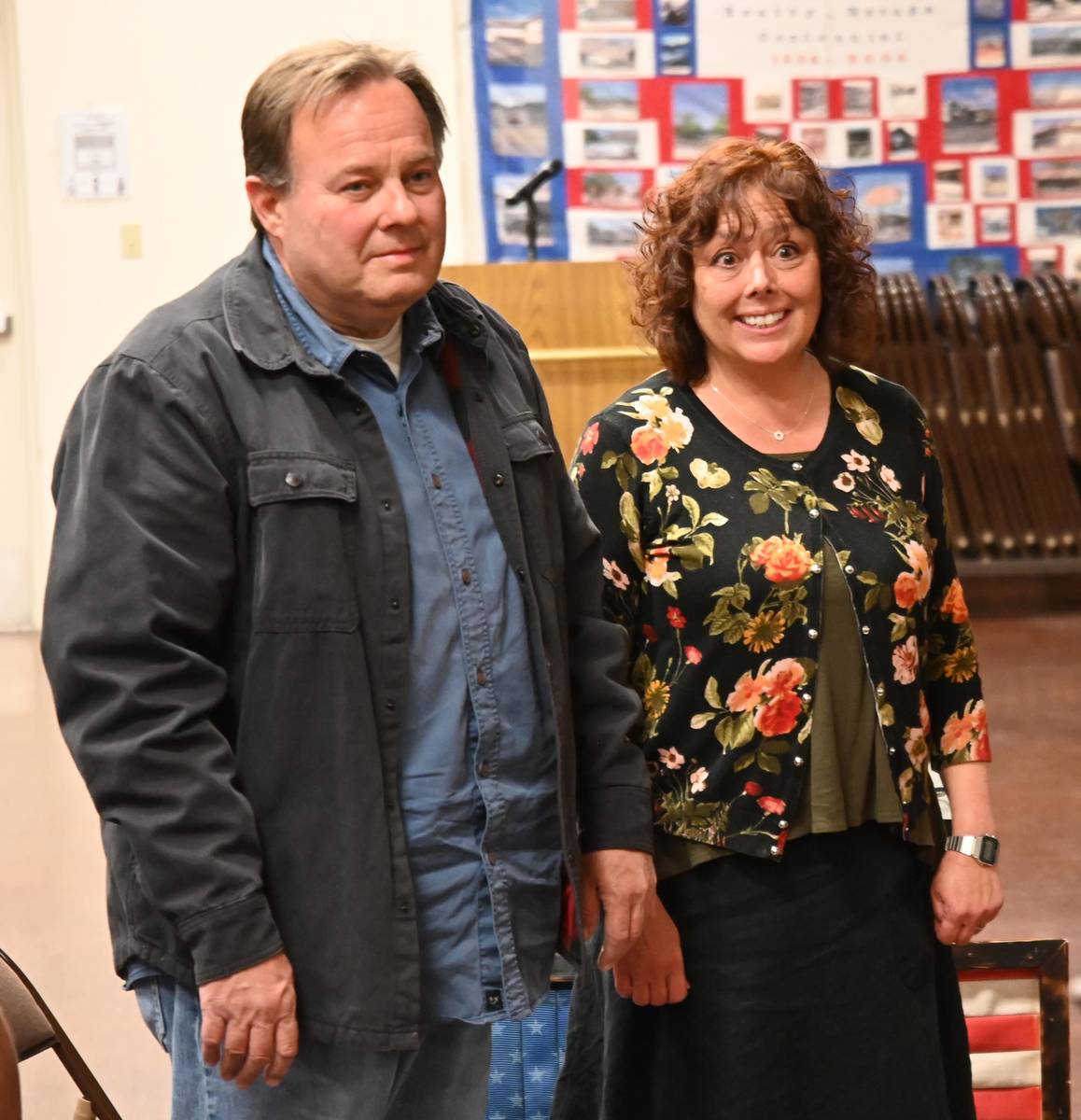 Richard Stephens/Special to the Pahrump Valley Times Carrie Radomski and her husband, George Radomski pose for a photo during an April 26 Beatty Town Advisory Board meeting. Carrie Radomski, Beatty town secretary, received a service award at the meeting. 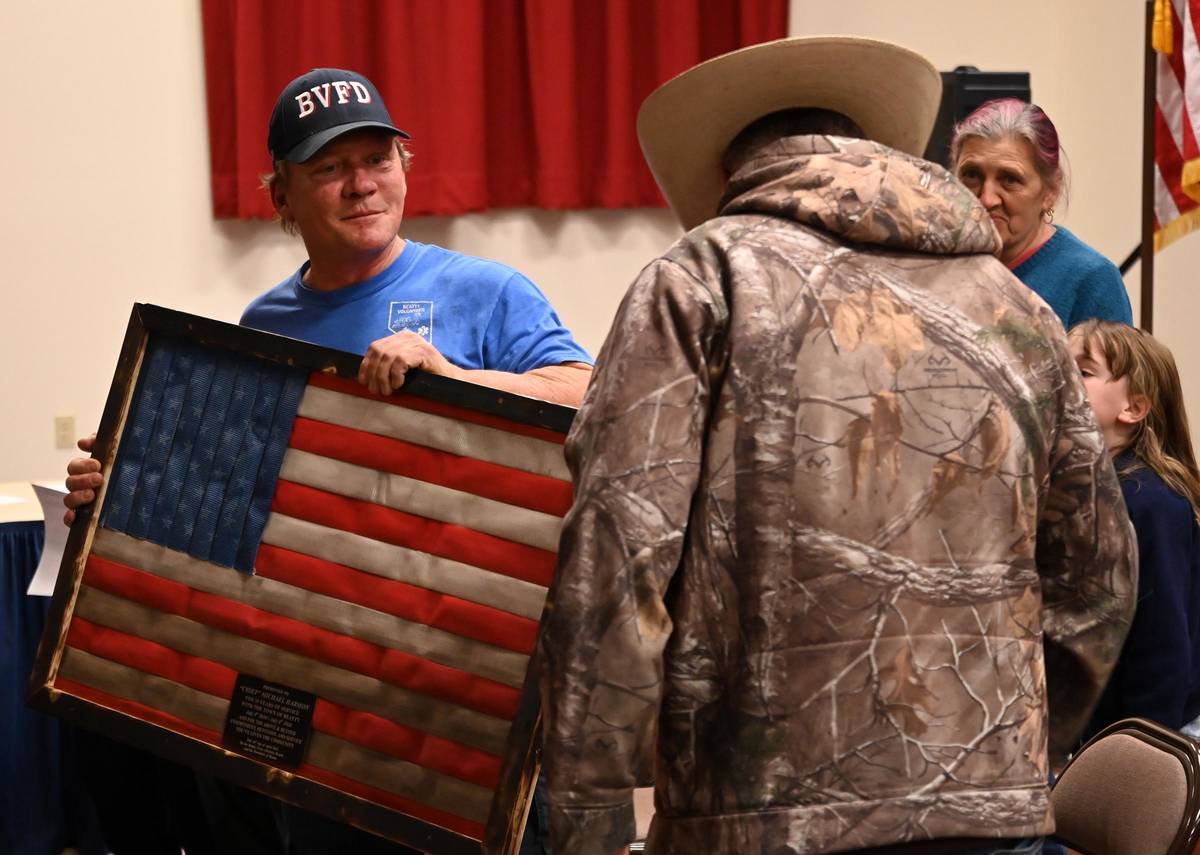 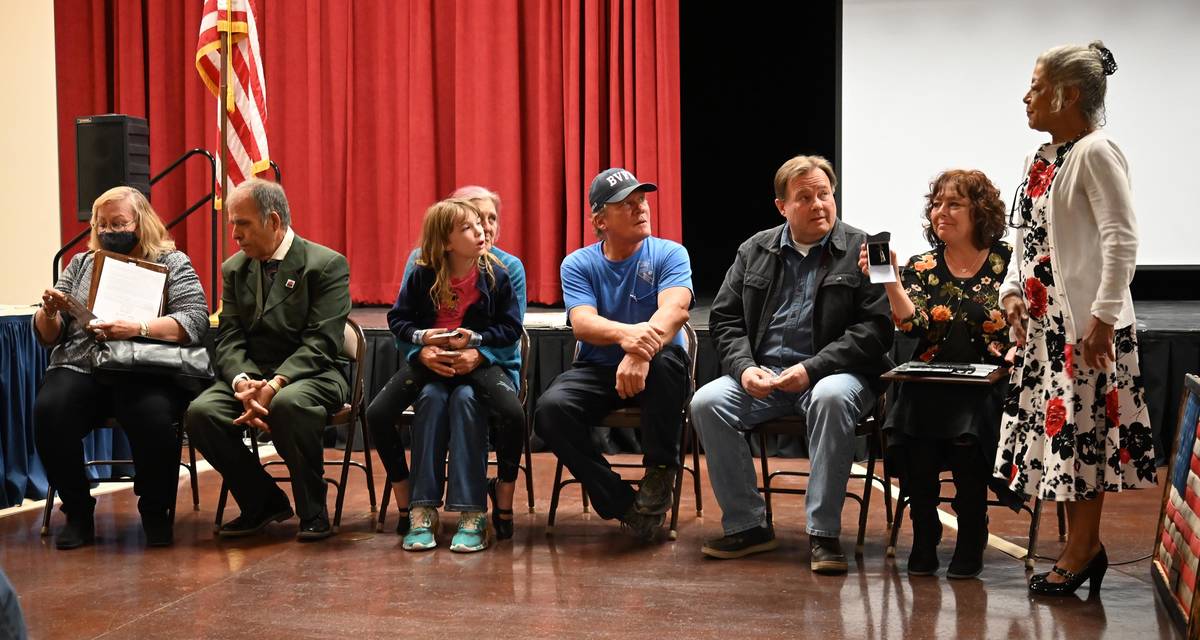 Richard Stephens/Special to the Pahrump Valley Times Three employees for the town of Beatty were honored with service awards during an April 26 meeting of the Beatty Town Advisory Board.

“Better late than never” is how Beatty Town Advisory Board treasurer Erika Gerling described the service awards presented to the town’s employees at the board’s April 26 meeting. All three were due to receive the recognition last year, but the process got lost under the pandemic.

The employees, along with their spouses, were called up individually to receive the awards, accompanied by warm words of praise for their service to the community.

Ricardo Lopez, the town custodian who has cared for the Community Center and more for sixteen years, was first. Lopez is well known for his concern and diligence in taking care of the needs of those using the facilities for a variety of events.

Mike Harmon, Chief of the Beatty Volunteer Fire Department and the town’s only paid fireman, also serves as an EMT on the Beatty Volunteer Ambulance Service. He said that his wife deserved the ten-year-plus-one award more than he did for putting up with his being called out and leaving so many times at all hours of the night.

BTAB member Kelly Carroll, himself a former volunteer fireman, presented Harmon with a large plaque in the form of an American flag made from retired fire hose by a retired fireman.

Carrie Radomski, town secretary, also recognized for ten years plus one of service, received high praise from Gerling, who said she had applied for the job when Radomski was hired and “cried for three days” when she didn’t get it.

Having worked with Radomski for years, Gerling said she soon found that she’d “never been so glad not to get a job.”

In its last matter of business in the meeting, the board voted to send a letter of support for Beatty Disposal’s 19.10 percent rate hike.

Mike Smith detailed the reasons for the rate hike in a presentation to the board, noting that Beatty Disposal had not had a rate hike since its beginning in 1998. He listed a variety of cost increases the company has faced since then, including increased cost of equipment and falling prices for recycled materials that now have to undergo more costly sorting and cleaning than in the past in order to be sold in China.

Residents in the audience complained that transfer bins at the town dump site are usually filled with construction debris soon after being emptied and that some people dump on the ground instead of in the bins.

Smith said that the bins, which his company is contracted with the county to haul, are intended for residential use. Beatty does not have an ordinance requiring contractors to provide their own dumpsters for their projects.

During closing comments, Jerry Hammes added his voice to those complaining about “growing junkiness” in Beatty, with abandoned vehicles and other refuse accumulating on some unused properties, including one near the Community Center. Board chairman Randy Reed responded that the board is “working on it.”